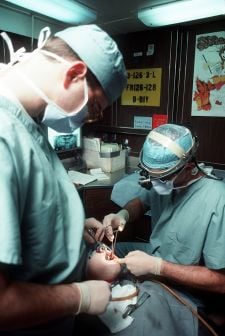 A dentist and dental assistant perform surgery on a patient.

Dentistry is the science and profession concerned with the study, diagnosis, prevention, and treatment of diseases, abnormalities, or other conditions of the teeth, gums, and adjacent structures of the oral cavity. This autonomous branch of biomedical science includes such activities as treating dental decay, oral surgery, extraction of decayed teeth, straightening teeth and repositioning them for normal occlusion, treatment of diseases of the tissues surrounding teeth, and preventive actions such as cleaning teeth and applying fluoride compounds to improve resistance to decay. As with medicine, dentistry has a number of specialized fields, as well as general practitioners.

The art or science of treating conditions of the teeth and related structures in the mouth is an ancient one, with writing references tracing back at least 5,000 years.

Dentistry represents a field designed to add to human well-being and to joy. Good dental health itself is often tied to personal responsibility, as it relates to such actions as good nutrition (sugar consumption is correlated with cavities), brushing one's teeth, regular dental checkups, and so forth. In recent years, dentists have placed a greater emphasis on prevention.

The American Dental Association defines dentistry as the:

evaluation, diagnosis, prevention and/or treatment (nonsurgical, surgical or related procedures) of diseases, disorders and/or conditions of the oral cavity, maxillofacial area and/or the adjacent and associated structures and their impact on the human body; provided by a dentist, within the scope of his/her education, training, and experience, in accordance with the ethics of the profession and applicable law (As adopted by the 1997 ADA House of Delegates).

Dentists can (and often do) further their training in one or more specialty areas (such as surgery, endodontics, orthodontics, etc.) Hence, there can be a great deal of variation between the level of skill in different disciplines from dentist to dentist.

General practitioners, unlike specialists, offer general service and can decide which services they will provide and which they will refer to specialists. It is important to note that most general practitioners perform restorative, prosthetic, routine endodontic therapy, routine periodontal therapy, and simple exodontia, as well as performing examinations. Others are comfortable treating more complex cases, as well as placing implants and extracting third molars, among many other procedures frequently referred to specialists. Dentists often delegate the task of cleaning teeth to their dental hygienists and other support staff. 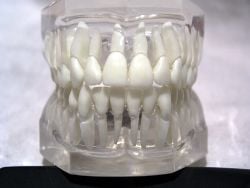 Development of teeth sculpture is a major improvement among dentistry.

To become a specialist typically requires one to train in a residency or advanced graduate training program. Once residency is completed, the doctor is granted a certificate of specialty training. Many specialty programs have optional or required advanced degrees such as (MD/MBBS specific to Maxillofacial Surgery), MS, or PhD.

Other subdivisions in dentistry

Two other post-graduate formal advanced education programs, General Practice Residency (advanced clinical and didactic training with intense hospital experience) and Advanced Education in General Dentistry (advanced training in clinical dentistry), are recognized by the American Dental Association but do not lead to specialization.

Other dental education exists where no post-graduate formal university training is required: cosmetic dentistry, dental implant, temporo-mandibular joint therapy. These usually require the attendance of one or more continuing education courses. There are restrictions on allowing these dentists to call themselves specialists in these fields. The specialist titles typically are registrable titles and controlled by the local dental licensing bodies.

Forensic odontology consists of the gathering and use of dental evidence in law. This may be performed by any dentist with experience or training in this field. The function of the forensic dentist is primarily documentation and verification of identity.

Geriatric dentistry or geriodontics is the delivery of dental care to older adults involving the diagnosis, prevention, and treatment of problems associated with normal aging and age-related diseases as part of an interdisciplinary team with other health care professionals.

Veterinary dentistry, a specialty of veterinary medicine, is the field of dentistry applied to the care of animals. 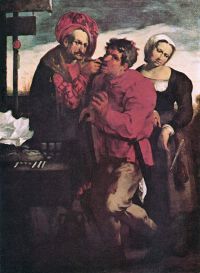 Evidence has been found of teeth having been drilled dating back perhaps 9,000 years ago (Coppa et al. 2006; CBC 2006). This is based on the finding of nearly perfect holes drilled into the teeth of nine skulls from a Pakistani graveyard that were carbon-dated to between 5500 B.C.E. and 7000 B.C.E. It is believed the drill bits were made out of tiny pieces of flint and manipulated with tiny bows, with the holes created impressive for their being so well done and even in the large molars in the back.

The earliest written record of dentistry appears to be a Sumerian text from 5000 B.C.E. that describes "tooth worms" as the causal agent of the dental decay (ADA 2007).

A finding dated to about 2750 B.C.E. in Egypt suggests a surgical procedure, with a mandible with two perforations below the root of the first molar suggesting drainage of an abscessed tooth, as well as gold wires found holding two teeth (IDA 2007).

The Ebers papyrus, a huge roll of more than 20 meters long and 30 cm wide, also discusses dental diseases and treatments (Arab 2017; ADA 2007). This text traces to about 1700 to 1550 B.C.E., although there are suggestions of dates as early as 3000 B.C.E. (Arab 2017). Some information contained in the Edwin Smith Papyrus, dated to about 1600 B.C.E., also deals with treatment of several dental ailments (Arab 2017). Hammurabi's Code contains some references to dental procedures and fees (IDA 2007). Examining the remains of some ancient Egyptians and Greco-Romans reveal early attempts at dental prosthetics and surgery (Arab 2017). 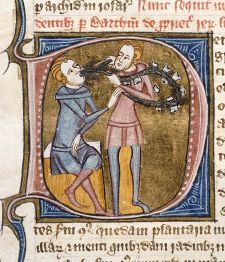 During the Middle Early Middle Ages in Europe, dentistry was particularly practiced by monks. Orchardson (2001) states that during the Dark and Middle Ages in Europe, from about 500 C.E. to 1500 C.E., there were no real advances, but Islamic scholars (such as Albucasis) continued to write extensively on teeth and tooth cleaning, and during this period the Hindus and Chinese advanced various dental treatments and complex surgical procedures. In 700 C.E., a medical text in China mentions a type of amalgam, a silver paste (ADA 2007).

In Europe, knowledge in dentistry would again bloom during the Renaissance (Orchardson 2001).

Historically, dental extractions have been used to treat a variety of illnesses. During the Middle Ages and through the nineteenth century, dentistry was not a profession into itself, and often dental procedures were performed by barbers or general physicians. Barbers had often assisted the monks in their surgical ministry and assumed the surgical duties when a series of papal edicts (1130 C.E. to 1163 C.E.) prohibited monks from performing any type of surgery or tooth extraction (ADA 2007). In 1210, a Guild of Barbers was established. Barbers usually limited their practice to extracting teeth, which not only resulted in the alleviation of pain, but often cured a variety of ailments linked with chronic tooth infection. Instruments used for dental extractions date back several centuries. Some barbers did more complex surgical operations. In the fourteenth century, Guy de Chauliac invented the dental pelican (resembling a pelican's beak) which was used through the late eighteenth century. The pelican was replaced by the dental key which, in turn, was replaced by modern forceps in the twentieth century.

The first book focused solely on dentistry was written by Artzney Buchlein in 1530, titled The Little Medicinal Book for All Kinds of Diseases and Infirmities of the Teeth. The first dental textbook written in English was called "Operator for the Teeth" by Charles Allen in 1685 (BDA 2007).

Did you know?
Seventeenth–century French physician Pierre Fauchard is known as "the father of modern dentistry"

It is said that the seventeenth–century French physician Pierre Fauchard started dentistry science as we know it today, hence he was named "the father of modern dentistry." Among many of his developments were the extensive use of dental prosthesis, introducing dental fillings as treatment for dental caries and stating that sugar derivate acids like tartaric acid were responsible for dental decay. His book, The Surgeon Dentist: A Treatise on Teeth, was the first to describe a comprehensive system for dentistry practice (ADA 2007).