Pelican is the common name for any of the large aquatic birds comprising the genus Pelecanus of the family Pelecanidae, characterized by heavy bodies, long necks, webbed feet in which all four toes are joined by the web, and a long straight bill with a distinctive distenable, featherless pouch used for catching and holding prey (mainly fish). There are about eight extant species of pelicans.

Pelicans play an important ecological role in food chains, consuming primarily fish and invertebrates, but also some small vertebrates, and the eggs, young, or adults being consumed by birds of prey, reptiles, rats, cats, and canines. For humans, their unique forms and behaviors and graceful swimming and flying adds to the human enjoyment of nature. In addition, some are captured for food, clothing, or presumed medical purposes (Howard 2003).

Along with the darters, cormorants, gannets, boobies, frigatebirds, and tropicbirds, pelicans make up the order Pelecaniformes. Members of Pelecaniformes are medium to large aquatic birds with feet in which all four toes are joined by a web (totipalmate) (Howard 2003). The young are born atricial, meaning they have closed eyes and are helpless, requiring they be cared for by an adult. With the exception of the tropicbirds, all lack natal down (Howard 2003). In most pelecaniform birds, there is a distensible gular sac located on the lower mandible, which in pelicans is bare and pendulous (handing down loosely), while in tropicbirds is feathered, and in frigatebirds is bare, red, and inflatable (Howard 2003).

Pelicans comprise the Pelecanus genus. Typically, this is considered the only genus within the Pelecanidae family (pelican family) (Myers et al. 2008). However, some taxonomies include within Pelecanidae the genus Balaeniceps, with its sole extant species, the shoebill (Balaeniceps rex) (ITIS 1998b). Mayr (2003) also found phylogenetic similarities between the shoebill and the pelicans. 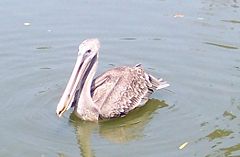 A pelican on water.

Pelicans are large birds with enormous, pouched bills. The smallest is the brown pelican (P. occidentalis), the smaller individuals of which can be as little as 2.75 kilograms (6 pounds), 106 centimeters (42 inches) long, and can have a wingspan of as little as 1.83 meters (6 feet). The largest is believed to be the dalmatian pelican (P. crispus), at up to 15 kilograms (33 pounds), 183 centimeters (72 inches) long, with a maximum wingspan of nearly 3.5 meters (11.5 feet). The Australian pelican has the longest bill of any bird (Nelson et al. 2003).

Pelicans swim well with their short, strong legs and their feet with all four toes webbed. The tail is short and square, with 20 to 24 feathers. The wings are long and have the unusually large number of 30 to 35 secondary flight feathers. A layer of special fibers deep in the breast muscles can hold the wings rigidly horizontal for gliding and soaring. Thus, they can exploit thermals to commute over 150 kilometers (100 miles) to feeding areas (Nelson et al. 2003).

Pelicans rub the backs of their heads on their preen glands to pick up its oily secretion, which they transfer to their plumage to waterproof it (Nelson et al. 2003). 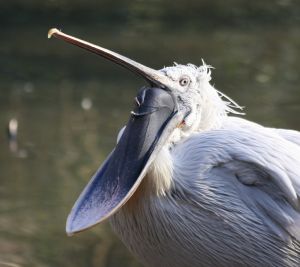 The regular diet of a pelican usually consists of fish, but they also eat mollusks, amphibians, crustaceans, and, on some occasions, smaller birds (BBC 2006; Clarke 2006). They often catch fish by expanding the throat pouch. Then they must drain the pouch above the surface before they can swallow. This operation takes up to a minute, during which time other seabirds are particularly likely to steal the fish. Pelicans, in turn, sometimes pirate prey from other seabirds (Nelson et al. 2003). 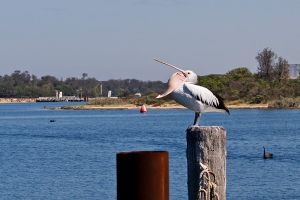 An Australian Pelican seemingly forcing its beak inside out, Lakes Entrance, Victoria

The white pelicans often fish in groups. They will form a line to chase schools of small fish into shallow water, and then simply scoop them up. Large fish are caught with the bill-tip, then tossed up in the air to be caught and slid into the gullet head first.

The brown pelican of North America usually plunge-dives for its prey. Rarely, other species such as the Peruvian pelican and the Australian pelican practice this method.

Pelicans are gregarious and nest colonially. The ground-nesting (white) species have a complex communal courtship involving a group of males chasing a single female in the air, on land, or in the water while pointing, gaping, and thrusting their bills at each other. They can finish the process in a day. The tree-nesting species have a simpler process in which perched males advertise for females (Nelson et al. 2003). Pairs are monogamous for a single season, but the pair bond extends only to the nesting area; mates are independent away from the nest.

In all species, copulation begins shortly after pairing and continues for 3 to 10 days before egg-laying. The male brings the nesting material—ground-nesters (which may not build a nest) sometimes in the pouch and tree-nesters crosswise in the bill. The female heaps the material up to form a simple structure (Nelson et al. 2003).

Both sexes incubate with the eggs on top of or below the feet. They may display when changing shifts. All species lay at least two eggs, and hatching success for undisturbed pairs can be as high as 95 percent, but because of competition between siblings or outright siblicide, usually all but one nestling dies within the first few weeks (or later in the pink-backed and spot-billed species). The young are fed copiously. Before or especially after being fed, they may seem to have a seizure that ends in falling unconscious; the reason is not clearly known (Nelson et al. 2003).

Parents of ground-nesting species have another strange behavior: They sometimes drag older young around roughly by the head before feeding them. The young of these species gather in "pods" or "crèches" of up to 100 birds in which parents recognize and feed only their own offspring. By six to eight weeks, they wander around, occasionally swimming, and may practice communal feeding (Nelson et al. 2003).

Young of all species fledge 10 to 12 weeks after hatching. They may remain with their parents afterwards, but are now seldom or never fed. Overall breeding success is highly inconsistent (Nelson et al. 2003).

Typically, eight species of pelican are recognized, although the Peruvian pelican is sometimes considered conspecific with the brown pelican (Nelson et al. 2003). They can be divided into two groups: Those with mostly white adult plumage, which nest on the ground (Australian, dalmatian, great white, and American white pelicans), and those with gray or brown plumage, which nest in trees (pink-backed, spot-billed, and brown) or sea rocks (Peruvian pelican) (Nelson et al. 2003).

The dalmatian pelican and the spot-billed pelican are the rarest species, with the population of the former estimated at between 10,000 and 20,000 (BL 2006) and that of the latter at 13,000 to 18,000 (BL 2004). The most common is believed to be the Australian pelican (though some estimates have placed the white pelican at a higher population).

From the fossil record, it is known that pelicans have been around for over 40 million years, the earliest fossil Pelecanus being found in early Miocene deposits in France. Prehistoric genera have been named Protopelicanus and Miopelecanus. The supposed Miocene pelican Liptornis from Argentina is a nomen dubium, being based on hitherto indeterminable fragments (Olson 1985).

A number of fossil species are also known from the extant genus Pelecanus: 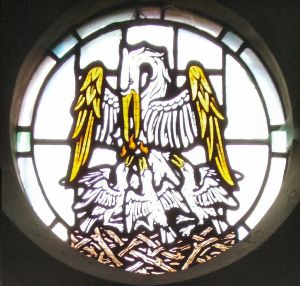 A pelican in her piety 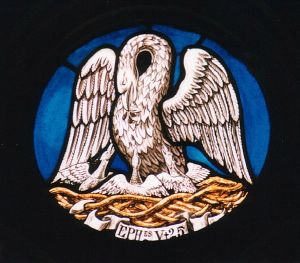 A pelican vulning itself

In medieval Europe, the pelican was thought to be particularly attentive to her young, to the point of providing her own blood when no other food was available. As a result, the pelican became a symbol of the Passion of Jesus and of the Eucharist. It also became a symbol in bestiaries for self-sacrifice, and was used in heraldry ("a pelican in her piety" or "a pelican vulning (wounding) herself"). Another version of this is one in which the pelican was considered to kill its young and then resurrect them with its blood, this being analogous to the sacrifice of Jesus. Thus, the symbol of the Irish Blood Transfusion Service (IBTS) is a pelican, and for most of its existence the headquarters of the service was located at Pelican House in Dublin, Ireland.

Likewise, a folktale from India says that a pelican killed her young by rough treatment but was then so contrite that she resurrected them with her own blood (Nelson et al. 2003).

These legends may have arisen because the pelican used to suffer from a disease that left a red mark on its chest. Alternatively it may be that pelicans look as if they are stabbing themselves as they often press their bill into their chest to fully empty their pouch. Yet other possibilities are that they often rest their bills on their breasts, and that the Dalmatian pelican has a blood-red pouch in the early breeding season (Nelson et al. 2003).