His books for children are perennially on booksellers shelves. He won a Grammy Award in 1984, for Best Children’s Album for Where the Sidewalk Ends. His book, A Light in the Attic, in 1981, and Falling Up, in 1996, both dominated bestseller lists for months, with A Light in the Attic breaking all previous records for its 182-week stay on the New York Times list. His poetry books are widely used in schools as a child’s first introduction to poetry.[1] In a list that first appeared in the December 17, 2002, issue of Publishers Weekly, Shel Silverstein had three children's books in the top 50 all-time bestselling children's books. With totals from just these three books, he had sales of over 16 million books.[2]

While Silverstein wrote over 400 children's poems, he also created nearly 800 songs for the adult market that included several songs for several films and TV specials. His song, "A Boy named Sue" won the Grammy Award for Best Country Song in 1969. The songs he wrote for Doctor Hook and the Medicine Show made the band famous and the tunes he crafted for Bobby Bare provided the country singer a fresh commercial run, and Johnny Cash's late 1960s comeback was fueled by his now classic rendition of "A Boy Named Sue."[3]

Silverstein was a creative genius who was difficult to categorize. While he was a family friendly author of children's books he was also an irreverent and sometimes raunchy writer for adults. His talent ranged across such a wide spectrum of fields and perspectives that he garnered fans from a broad range of humanity.

Sheldon Allan Silverstein was born in Chicago, Illinois, in 1930, and grew up with athletic aspirations before pursuing more artistic endeavors. In his 1975 interview with Jean F. Mercier for Publishers Weekly, he described his childhood:

When I was a kid—12, 14, around there—I would much rather have been a good baseball player or a hit with the girls. But I couldn't play ball, I couldn't dance. Luckily, the girls didn't want me; not much I could do about that. So, I started to draw and to write. I was also lucky that I didn't have anybody to copy, be impressed by. I had developed my own style, I was creating before I knew there was a Thurber, a Benchley, a Price, and a Steinberg. I never saw their work till I was around 30. By the time I got to where I was attracting girls, I was already into work, and it was more important to me.[4]

Silverstein had two children. His first child, with Susan Hastings, was daughter Shoshanna (Shanna), born June 30, 1970. Hastings died five years later, on June 29, 1975, in Baltimore, Maryland. Shoshanna was raised by her aunt and uncle, Meg and Curtis Marshall, from age five until her death of a cerebral aneurysm in Baltimore on April 24, 1982, at the age of 11. Shanna was attending the Bryn Mawr School in Baltimore at the time of her death. Silverstein dedicated his 1983 reprint of Who Wants a Cheap Rhinoceros to the Marshalls. Silverstein’s A Light in the Attic was dedicated to Shanna, and he drew the sign with a flower attached; Shoshanna means "lily" or "rose" in Hebrew. Silverstein’s second child, Matthew, was born on November 10, 1983. Matthew's mother is alleged to be the "Sarah" mentioned in the acknowledgments in Falling Up, which was dedicated to Matthew.

Silverstein was fond of spending time in Greenwich Village, Key West, Martha’s Vineyard, and Sausalito. He died in Key West in May 1999, of a heart attack. His body was found by two housekeepers on Monday, May 10. It was reported that he had most likely died on either May 8 or May 9.

In the 1950s Silverstein served in the Korean War. During this period, he contributed his cartoon artwork to Pacific Stars and Stripes, a U. S. military publication. The experience allowed him to transition into a new role as staff cartoonist for Playboy magazine in 1956. In the late 1950s and 1960s, Playboy sent him around the world to draw a travel journal. His 23 dispatches hailed from such far-flung locales as Japan, Moscow, London, Paris, and Africa, and various United States locales. Most of the cartoons' gags played against cultural stereotypes.

As the staff cartoonist for Playboy, Silverstein took the opportunity to publish several poems in the magazine, such as "The Winner," "Rosalie's Good Eats Cafe," and "The Smoke-off." It was not until 1963, when he met Ursula Nordstrom through his illustrator colleague Tomi Ungerer that he was encouraged to seriously pursue writing for children.

The result was the publication of Uncle Shelby’s Story of Lafcadio, the Lion Who Shot Back. After his clever and silly ideas met acclaim, Silverstein decided that he enjoyed this type of writing. The following year brought the release of his classic children’s book, The Giving Tree. The tale, about a tree’s fondness for a boy, was initially rejected by publishers because it seemed too childish for adults and yet too grown-up for children. The book would eventually bring Silverstein vast recognition and become one of his most popular creations. Thirty years after it first came out, it was listed in the top 15 books on a list of children's best sellers over a six-week period in March and April of 1994, in the category of picture books and storybooks.[5]

Another notable work, Where the Sidewalk Ends (1974), was a collection of often humorous poems for children. His whimsical style compelled readers and critics to draw connections between him and Dr. Seuss. Also popular was a 1981 collection of poems that followed, titled A Light In The Attic.

In 1976, The Missing Piece was published. It chronicles the adventures of a circle with a wedge of itself missing, who goes along singing and searching for that missing part. But after the circle finds the right wedge, he decides he was happier on the search—without the missing piece—than he is with it. A sequel, called The Missing Piece Meets the Big O, was published in 1981, and was written from the perspective of the missing piece, who discovered the value of self-sufficiency.

Falling Up: Poems and Drawings marked Silverstein’s return to poetry for children in 1996, after a fifteen year hiatus from the genre. It was met with widespread critical praise.

In 2005, Silverstein's last book, Runny Babbit: A Billy Sook, was published posthumously. As the title suggests, every poem and illustration in the book consists of spoonerisms. In an interview with National Public Radio, Mitch Myers, Shel Silverstein's nephew, who wrote the liner notes for a Best of Shel Silverstein CD and helped compile the new collection of poems, said, "I think he wasn't sure about how it would be received. It is and was very different. And it's not easy, even for adults to read. I think, actually, younger children have a better time at it because they're not so preconceived in their notions of how words work. And the playfulness of it really comes across."[6] 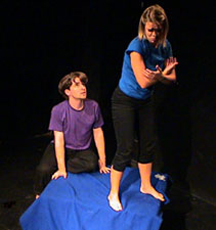 Though his fame was heavily tied to his children’s works, Silverstein also wrote for the stage and film. In 1981, Silverstein devoted more time to writing plays. One of his most well-known was a one-act play called The Lady or the Tiger Show, a satire that featured contestants having to choose between two doors—one which opened to a beautiful woman, and another which opened to a tiger. It was about a television producer who will do anything to get his ratings up. He also co-wrote the screenplay for the 1988 film, Things Change, with David Mamet. The 1989 production of another Silverstein play, The Devil and Billy Markham, debuted with David Mamet’s Bobby Gould in Hill at the Lincoln Center in New York City. Together, the plays were billed under the title Oh, Hell! Two One-Act Plays.

After Silverstein’s death, a celebration of his collective work was presented as An Adult Evening of Shel Silverstein. The production was a collection of short sketches, directed by Karen Kohlhaas, and produced by the Atlantic Theater Company in New York City in September 2001. David Mamet, Silverstein’s once-collaborator, was a co-founder of the company. In December of the same year, Shel's Shorts was produced in repertory as two separate evenings under the titles Signs of Trouble and Shel Shocked by the Market Theater in Cambridge, Massachusetts. Signs of Trouble was directed by Wesley Savick, and Shel Shocked was directed by Larry Coen.

Silverstein’s talents extended to music as well. He studied briefly at the Chicago College of Performing Arts at Roosevelt University and later found success as both songwriter and composer.

Most notably, he wrote the music and lyrics for "A Boy Named Sue," made a classic by Johnny Cash. The song won Silverstein a Grammy Award in 1970. Other popular songs by Silverstein included "One's on the Way," a hit for Loretta Lynn, "25 Minutes to Go," a song also sung by Cash about a man on death row, and "The Unicorn," which despite having nothing to do with Ireland nor Irish culture, became the signature piece for The Irish Rovers in 1968, and is popular in Irish pubs all over the world to this day.

He wrote the lyrics and music for most of the Dr. Hook & The Medicine Show songs, including "Sylvia's Mother." He also wrote many of the songs performed by country music star Bobby Bare, including one song co-written with Baxter Taylor called "Marie Laveau," which scored the duo a BMI Award in 1975.

Silverstein’s songs and compositions were featured in film as well. The song "The Ballad of Lucy Jordan," recorded in 1979, by Marianne Faithfull and later featured in the films Montenegro and Thelma & Louise, was also by Silverstein, as was "Queen of the Silver Dollar," which appeared on Emmylou Harris' 1975 album, Pieces of the Sky and was also covered by Dave & Sugar. He was nominated for an Oscar for his music for the film Postcards from the Edge. He also composed original music for several other films, and displayed a musical versatility in these projects, playing guitar, piano, saxophone, and trombone.

Silverstein also had a popular following on Dr. Demento's radio show. Among his best-known comedy songs were "Sarah Cynthia Sylvia Stout (Would Not Take The Garbage Out)," "The Smoke Off," and "On the Cover of Rolling Stone." He also wrote "The Father of a Boy Named Sue," in which he tells the story from the original song from the father's point of view, and the 1962 song "Boa Constrictor" that is sung by a man who is being progressively swallowed whole by a snake, although it is now better known as a children's playground chant.

Silverstein was a longtime friend of American singer and songwriter Pat Dailey, with whom he collaborated on the Underwater Land album, posthumously released in 2002. It contains 17 children's songs written and produced by Silverstein and sung by Dailey. Silverstein contributed his artwork to the album and also appears along with Dailey on a few tracks.

Shel Silverstein's legacy is the voluminous library of books and records that will forever reach out to people of all ages.

Upon his death in 1999, an obituary in Publishers Weekly quoted Robert Warren, Silverstein’s editor, who said that Silverstein "had a genius that transcended age and gender, and his work probably touched the lives of more people than any writer in the second half of the twentieth century."

In 2002, Silverstein was posthumously inducted into the Nashville Songwriters Hall of Fame.