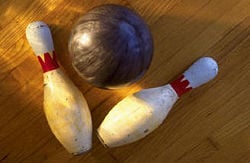 A Bowling Ball and Pins

Bowling is a sporting activity in which players attempt to score points by rolling a ball to knock down target objects. Bowling has been popular for hundreds of years, with different variations taking hold in Europe and North America. It may date back as far as Ancient Egypt. The game is popular for its competitive, yet socially friendly, atmosphere and relative simplicity.

There are many different forms of the game in various parts of the world. The most popular form in North America, and globally, is Ten-Pin Bowling, the type of bowling associated with the World Tenpin Bowling Association, an internationally recognized professional sports federation. Other forms, such as ninepin, candlepin, and lawn bowling, are still popular games around the world.

There are many claims to the origins of bowling. The International Bowling Museum suggests that bowling might date as far back to 3200 B.C.E. in Ancient Egypt, with more recognizable forms emerging in Germany in the fourth century C.E. and in England in the fourteenth century. Bowling was, undoubtedly, one of the more popular games brought to the British colonies in America, where it transformed from the more traditional game of ninepins into the modern-day tenpins format.

The commercial market for bowling took off in the United States in the late 1940s, with the growth of the American Machine Foundry (AMF, Inc.), which developed the first automatic pinsetters. Professional leagues and televised matches took off from this point, helping propel bowling into the popular competitive and social activity it is today.

The ten pins are arranged in the following manner:

The “1-Pin” is also called the “Head Pin.” Other popular types of indoor bowling include: 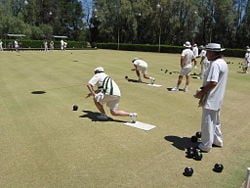 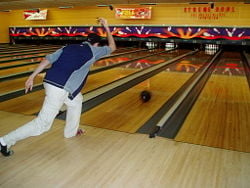 A player at ten-pins bowling.

Scoring was done largely by hand until the 1970s, when automated scoring systems were put into place at many commercial bowling alleys. These computers read the number of pins left standing in the lane and score the games accordingly.

In bowling leagues, players are generally awarded a handicap, which is a number of points automatically designated to a player based on his or her scoring average. Over the course of many games, a player’s average is determined, and to balance the playing field, players are awarded handicaps to level the averages. Bowling with handicaps is a strategy to determine how a player bowls versus his average game, rather than by gross score.

Fouls may occur in bowling when a player crosses the foul line at the base of the lane as they release the ball. If a player crosses the line, a foul is recorded as “F” and the player continues with their frame. If it occurs on the first attempt, ten pins are then positioned for the second attempt. If it occurs on the second attempt, the player is only awarded the score from the first throw, and the frame is then completed. Generally, fouls are monitored by electronic sensors at the base of the lane. However, in some forms, fouls must be recorded by other players or a judge.

There are several variations on the scoring of Ten-Pin bowling. One form is Low-Ball, in which players attempt to score the least amount of points by aiming for just one pin (the seven or the ten). Games are scored just as normal bowling, with the exception that "gutter" balls (see below) are always recorded as strikes, and if a player throws the ball on the second attempt and does not hit any pins without going in the gutter, this is recorded as a spare. Therefore, a perfect game of Low-Ball Bowling would be a 20, one point for each attempt throughout ten frames.

Outdoor bowling, of which the most popular form are Bowls (or Boules) and Bocce, typically takes place on a wide, flat patch of open grass, although it is sometimes played on dirt or gravel. Players are divided into teams, and they pursue the objective of tossing or rolling the ball toward a target object, often a small white or brightly-colored rubber ball. Similar to horseshoes, the players' goal is to stop the ball closest to the target object, and points are awarded for the best attempts. All the players throw from the same distance or tossing area, and the target is continually replaced about the playing surface (often called a "bowling green") until a final determined score is reached.

The Professional Bowlers Association, otherwise known as the PBA, is a competitive bowling league for professionals. It was formed in 1958 by Eddie Elias, an attorney from Ohio. Formats for PBA events typically are played in 64-person tournament format, with head-to-head matches leading to a final game. Players typically alternate lanes in these matches, and prize money is awarded to the top finishers in an escalating format.

The Premier Tenpin Bowling Club is Britain’s version of the PBA. Bowlers compete for championships and prizes in a similar format to the PBA.

The European Tenpin Bowling Federation is a governing organization on ten-pin bowling in Europe and runs the European Bowling Association tour.

The European Bowling Tour (EBT) is similar to the PBA and, along with the Asian Bowling Federation, competes internationally for the World Tenpin Bowling Association’s World Ranking Masters championship.

Retrieved from https://www.newworldencyclopedia.org/p/index.php?title=Bowling&oldid=1064640
Categories:
Hidden category:
This page was last edited on 9 February 2022, at 15:11.
Content is available under Creative Commons Attribution/Share-Alike License; additional terms may apply. See Terms of Use for details.