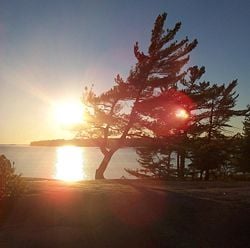 A windswept pine on the eastern shoreline of Georgian Bay.

Georgian Bay (French: baie Georgienne) is a large bay of Lake Huron, located in Ontario, Canada. The main body of the bay lies east and northeast of the Bruce Peninsula, south of Killarney and north of Collingwood. The North Channel of Georgian Bay extends further west, to St. Joseph Island near Sault Ste. Marie, dividing Manitoulin Island from the mainland of Northern Ontario. The Main Channel divides Manitoulin Island from the Bruce Peninsula, and connects Georgian Bay to the rest of Lake Huron; a series of smaller channels, including the Mississagi Strait and the False Detour Channel, connect the North Channel and the main water body between Manitoulin Island, Cockburn Island, Drummond Island and St. Joseph Island.

Georgian Bay was the first area of the Great Lakes to be visited by Europeans, entering via the Ottawa River and Lake Nipissing in 1615. An Indian mission was established by the Jesuits in 1639, near the present–day town of Midland.

The area is well–known as "Cottage Country" for the many summer homes and weekend cottages owned by both Canadians and Americans.

The Georgian Bay in south-central Ontario, Canada, is an inlet of Lake Huron, one of the five North American Great Lakes. It was first explored by Samuel de Champlain in 1615 and was named for King George IV by Captain Henry Bayfield of the Royal Navy.

The Bay is 120 miles (190 km) long and 50 miles (80 km) wide, and the depth (generally 100–300 feet [30–90 m]) reaches a maximum of 540 feet (165 m) near the Main Channel. It covers over 15,000 square kilometers, making it almost as large as Lake Ontario. Eastern Georgian Bay is part of the southern edge of the Canadian Shield, a geological formation carved out by the retreating glaciers at the end of the last Ice age, about 11,000 years ago. The granite rock formations and windswept Eastern White Pine are characteristic of the islands and much of the shoreline of the bay. The beauty of the area has inspired landscapes by artists of the Group of Seven. The western part of the bay, from Collingwood north, and including Manitoulin Island, Drummond, Cockburn and St. Josephs Island, borders the Niagara Escarpment.

There are tens of thousands of islands in Georgian Bay. Most of these islands are along the east side of the bay and are collectively known as the "Thirty Thousand Islands," including the larger Parry Island and Christian Island. Manitoulin Island, lying along the northern side of the bay is the world's largest island in a freshwater lake. The Trent-Severn Waterway connects Georgian Bay to Lake Ontario, running from Port Severn in the southeastern corner of Georgian Bay through Lake Simcoe into Lake Ontario near Trenton. Further north, Lake Nipissing drains into it through the French River. In October 2004, the Georgian Bay Littoral was declared a Biosphere Reserve by UNESCO.

The region surrounding the Bay is well forested except for an apple-growing area along the southern shore. Many of its small, rock-bound wooded islands are summer resorts, the majority of which are family-owned vacation homes and used personally.

Archeological records reveal an aboriginal presence in the southern regions of the Canadian Shield dating from 11,000 years ago. Evidence of later paleo-Aboriginal settlements have been found on Manitoulin Island and near Killarney, Ontario. At the time of contact the Ojibwe (Chippewa) and Ottawa First Nations, both of whom call themselves Anishinaabe, lived along the northern and eastern shores of Georgian Bay. The Huron (or Wendat) and Iroquois (or Haudenosaunee) inhabited the lands to the south. Names of islands such as "Manitoulin" (from Gitchi Manitou, the Great Spirit) and "Giant's Tomb" are indicative of the richness of the cultural history of the area. Aboriginal communities continue to live on their territories and practise their cultural traditions.

The first Europeans to visit this area, the French explorers Samuel de Champlain and Étienne Brûlé, arrived in the seventeenth century.

Sainte-Marie Among the Hurons was a French Jesuit settlement in Wendake, the land of the Wyandot, near modern Midland, Ontario, just off the Georgian Bay. It was the first non-Native American settlement in what is now the province of Ontario. Established in November 1639, it served as the main center for Jesuits in the region.

The establishment of the mission led to division amongst the Wyandot, with conflict between those who converted to Christianity and those who maintained their traditional beliefs. Disease, an unintended result of first contact between the Jesuits, their farm animals and the Indians, served to further the gap between the traditional Wyandot and the missionaries. Also during this time, the rivalry between the Wyandot and Iroquois began to reignite, further weakening the Wyandot who were already suffering from their internal divisions and losses from the conflict. 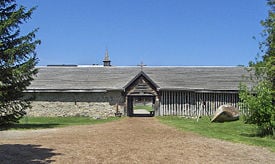 Eight of the missionaries, including Saint Jean de Brébeuf and Saint Gabriel Lallemant, were martyred in the Huron-Iroquois wars. Owing to the proximity of their deaths to Sainte-Marie, the bodies of Brébeuf and Lalemant were quickly recovered by the French and buried at the mission.

The remaining missionaries chose to burn the original mission rather than risk its being over-run by Iroquois in further attacks. They travelled to present day Christmas Island and attempted to construct a second mission site, more suitable to defense. Severe winter conditions accompanied by constant threat of Iroquois attack eventually drove them back to New France.

The original site of the mission lay dormant until 1844, when excavations were begun. In 1940 the Society of Jesus purchased the property and have rebuilt it as an historical site and living museum. Not far away, in the town of Midland, is the Martyr's Shrine, built as a memorial to the martyred missionaries to the Wyandot.

The eight martyred missionaries were canonized by Pope Pius XI in 1930, and are collectively known in Canada as the Canadian Martyrs. Sainte-Marie Among the Hurons (the re-constructed original mission) is now a national shrine in Canada, and was visited by Pope John Paul II in 1984 as part of his papal visit to Canada.

Penetanguishene, also located at the southern tip of the bay near Midland, was created as a naval base in 1793 by John Graves Simcoe (for whom Lake Simcoe is named).

In 1814, during the War of 1812, one of the battles was fought in Southern Georgian Bay. On August 17, at the mouth of the Nottawasaga River near Wasaga Beach, the British schooner HMS Nancy was sunk by three American vessels. Several weeks later, the Nancy was avenged when two of the American vessels were surprised and captured by British boarding parties in the Detour Passage.

Georgian Bay was first charted in 1815 by Captain William Fitzwilliam Owen who called it Lake Manitoulin. In 1822, it was named after King George IV by Captain Henry Bayfield who made much more detailed charts of the bay. These charts are the basis of those in use today.

The towns of Midland and Penetanguishene, at the southern end of the bay, are a popular site for summer cottages, as are the many bays and islands on the eastern shore. At the southern end of the bay, around Nottawasaga Bay, are found Collingwood, Meaford and Wasaga Beach. Owen Sound and Wiarton are located on the Bruce Peninsula along the southern and southwestern shore of the bay, while Tobermory is located at the northern tip of the Bruce Peninsula on the Main Channel. Locks at Port Severn, at the western end of the Trent-Severn Waterway, are busy throughout the summer with recreational boaters. The Chi-Cheemaun ferry travels from Tobermory, across the Main Channel to South Baymouth on Manitoulin Island. Parry Sound, the world's deepest freshwater port, is located on the eastern shore of the bay. 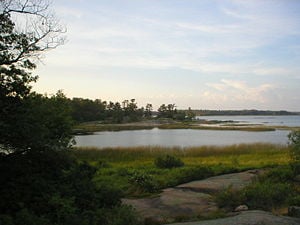 The waters between Finger Point and Thumb Point near Cedar Springs, Beausoleil Island.

Georgian Bay Islands National Park consists of over 40 small islands or parts of islands in the Georgian Bay, near Port Severn, Ontario. The park was established in 1929 and has a total area of approximately 13 square kilometers.

The islands blend the exposed rocks and pines of the Canadian Shield with the hardwood forests found further south. The park can be reached only by boat; there are limited camping facilities and a visitor center on the largest island, Beausoleil Island.

The park provides habitat for 33 species of reptiles and amphibians, including the threatened eastern Massasauga Rattlesnake. Some of the more isolated islands provide nesting areas for colonies of gulls and terns. Black Terns can be found nesting on some of the islands.

The park is part of the Georgian Bay Littoral Biosphere Reserve.

Beausoleil Island is one of the last refuges for the seldom seen eastern massasauga rattlesnake; the only snake in Ontario whose venom is potentially dangerous to humans. On sunny days, the Georgian Bay's cobalt waters form a striking counterpart to the light blue of the sky, the pinkish rocks of the Canadian Shield, and the dark green of the park's famous windswept pines. The Cambrian Trail, in the north part of the island, offers especially striking views of these natural features.