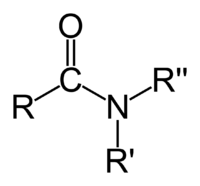 In chemistry, an amide is one of two kinds of compounds:

Amides are the most stable of all the carbonyl functional groups.

Many chemists make a pronunciation distinction between the two, saying (IPA: [ə'mɪd] for the carbonyl-nitrogen compound and ['æmɑɪd] for the anion. Others substitute one of these pronunciations with ['æmɪd], while still others pronounce both as ['æmɪd], making them homonyms.

In the first sense referred to above, an amide is an amine where one of the nitrogen substituents is an acyl group; it is generally represented by the formula: R1(CO)NR2R3, where either or both R2 and R3 may be hydrogen. Specifically, an amide can also be regarded as a derivative of a carboxylic acid in which the hydroxyl group has been replaced by an amine or ammonia.
Compounds in which a hydrogen atom on nitrogen from ammonia or an amine is replaced by a metal cation are also known as amides or azanides.

The second sense of the word amide is the amide anion, which is a deprotonated form of ammonia (NH3) or an amine. It is generally represented by the formula: [R1NR2]-, and is an extremely strong base, due to the extreme weakness of ammonia and its analogues as Brønsted acids. 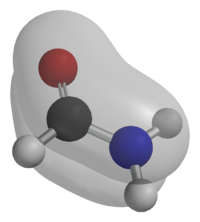 The remainder of this article is about the carbonyl-nitrogen sense of amide. For examples of the anionic amide, see the articles Sodium amide and Lithium diisopropylamide.

Owing to their resonance stabilization, amides are relatively unreactive under physiological conditions, even less than similar compounds such as esters. Nevertheless, amides can undergo chemical reactions, usually through an attack of an electronegative atom on the carbonyl carbon, breaking the carbonyl double bond and forming a tetrahedral intermediate. When the functional group attacking the amide is a thiol, hydroxyl or amine, the resulting molecule may be called a cyclol or, more specifically, a thiacyclol, an oxacyclol or an azacyclol, respectively.

The proton of an amide does not dissociate readily under normal conditions; its pKa is usually well above 15. However, under extremely acidic conditions, the carbonyl oxygen can become protonated with a pKa of roughly -1.

An amide linkage is kinetically stable to hydrolysis. However, it can be hydrolysed in boiling alkali, as well as in strong acidic conditions. Amide linkages in a biochemical context are called peptide linkages. Amide linkages constitute a defining molecular feature of proteins, the secondary structure of which is due in part to the hydrogen bonding abilities of amides.

Compared to amines, amides are very weak bases. While the conjugate acid of an amine has a pKa of about 9.5, the conjugate acid of an amide has a pKa around -0.5. Therefore amides don't have as clearly noticeable acid-base properties in water. This lack of basicity is explained by the electron-withdrawing nature of the carbonyl group where the lone pair of electrons on the nitrogen is delocalized by resonance, thus forming a partial double bond with the carbonyl carbon and putting a negative charge on the oxygen. On the other hand, amides are much stronger bases than carboxylic acids, esters, aldehydes, and ketones (conjugated acid pKa between -6 and -10). It is estimated in silico that acetamide is represented by resonance structure A for 62 percent and by B for 28 percent [3]. Resonance is largely prevented in the very strained quinuclidone.

Amides contain carbonyl (C=O) and ether (N-C) dipoles arising from covalent bonding between electronegative oxygen and nitrogen atoms and electro-neutral carbon atoms. Primary and secondary amides also contain two- and one N-H dipoles, respectively. Because of the pi-bonding arrangement of the carbonyl and the greater electronegativity of oxygen, the carbonyl (C=O) is a stronger dipole than the N-C dipole. The presence of a C=O dipole and, to a lesser extent a N-C dipole, allows amides to act as H-bond acceptors. In primary and secondary amides, the presence of N-H dipoles allows amides to function as H-bond donors as well. Thus amides can participate in hydrogen bonding with water and other protic solvents; the oxygen and nitrogen atoms can accept hydrogen bonds from water and the N-H hydrogen atoms can donate H-bonds. As a result of interactions such as these, the water solubility of amides is greater than that of corresponding hydrocarbons

While hydrogen bonding may enhance the water solubility of amides relative to hydrocarbons (alkanes, alkenes, alkynes and aromatic compounds), amides typically are regarded as compounds with low water solubility. They are significantly less water soluble than comparable acids or alcohols due to: 1.) their non-ionic character 2.) the presence of nonpolar hydrocarbon functionality, and 3.) the inability of tertiary amides to donate hydrogen bonds to water (they can only be H-bond acceptors). Thus amides have water solubilities roughly comparable to esters. Typically amides are less soluble than comparable amines and carboxylic acids since these compounds can both donate and accept hydrogen bonds, and can ionize at appropriate pHs to further enhance solubility.

Sulfonamides are analogues of amides in which the atom double-bonded to oxygen is sulfur rather than carbon.

Retrieved from https://www.newworldencyclopedia.org/p/index.php?title=Amide&oldid=1052830
Categories:
Hidden category:
This page was last edited on 17 May 2021, at 15:31.
Content is available under Creative Commons Attribution/Share-Alike License; additional terms may apply. See Terms of Use for details.