Amherst is a member of the Five Colleges consortium, which allows its students to attend classes at four other Pioneer Valley institutions. These include Mount Holyoke College, Smith College, Hampshire College, and the University of Massachusetts. The Five Colleges are geographically close to one another and are linked by buses which run between the campuses. The Five Colleges share resources and develop common programs.

A small college, Amherst has nonetheless been consistently ranked among the top, and on several occasions as the top, liberal arts college in the United States. It aims to prepare its students for a wide variety of careers, allowing them to develop their unique abilities and talents so that they can best serve society as educated adults.

Like many American colleges, Amherst was founded with the goal of preparing young people for lives of religious work. The aims of the school developed to be less parochial over time and today Amherst is known for its excellent liberal arts education. As a small college, Amherst encourages intimate interaction between students and professors. This environment is said to nurture students' abilities rather than intimidate them as nameless, faceless masses. Amherst aims to educate students of all backgrounds in preparation for serving the world in various capacities.[1]

"Amherst Academy was the mother of Amherst College," according to William S. Tyler, who wrote two comprehensive histories of Amherst College.[2] Funds were raised for the Academy in 1812, and the school went into operation in December 1814. On November 18, 1817, a project was adopted at the Academy to raise funds for the free instruction of "indigent young men of promising talents and hopeful piety, who shall manifest a desire to obtain a liberal education with a sole view to the Christian ministry." This required a substantial investment from benefactors. During the fundraising for the project, it became clear that without larger designs, it would be impossible to raise sufficient funds. This led the committee overseeing the project to conclude that a new institution should be created. On August 18, 1818, the Amherst Academy board of trustees accepted this conclusion and began building a new college.

Founded in 1821, Amherst College was intended to be a successor to Williams College, which was then struggling to stay open, and Amherst Academy, a secondary school which educated, among others, Emily Dickinson. Noah Webster, an attorney who had moved to the town of Amherst to escape the high cost of living in Connecticut, was recruited for the college's first board of trustees; a statue in his honor stands on the campus. (Webster is more famous for having published the first dictionary of American English with printer William Merriam of Springfield, Massachusetts.)

Amherst Academy and Amherst College were both named for the town of Amherst, which in turn was named for Jeffery Amherst, 1st Baron Amherst, commanding general of British forces in North America during the French and Indian War. Lord Amherst is now notorious for his comments, in a letter to a peer, about spreading smallpox-infected blankets among Native Americans. Because the college takes its name from the town, it also inherits the local pronunciation ("am-erst"), in which the "h" is silent. 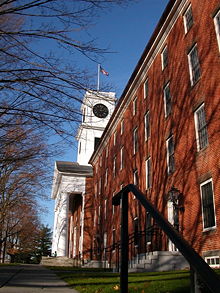 For two years in the mid-1830s, Amherst was the second largest college in the United States, second only to Yale. In 1835, Amherst attempted to create a course of study parallel to the classical liberal arts education. This parallel course focused less on Greek and Latin, instead focusing on English, French, Spanish, chemistry, economics, and so forth. The parallel course did not take hold, however, until the next century.

Originally a men's college, Amherst began admitting women in the 1970s. Women were first admitted as transfer students in 1975, while the first entering class were admitted in 1976.

Williams alumni are fond of an apocryphal story ascribing the removal of books from the Williams College library to Amherst College, but there is no contemporaneous evidence to verify the story. In 1995, Williams president Harry C. Payne declared the story false, but the legend is still nurtured by many.

Academic hoods in the United States are traditionally lined with the official colors of the school, in theory so watchers can tell where the hood wearer earned his or her degree. Amherst's hoods are purple (Williams' official color) with a white stripe or chevron, said to signify that Amherst was born of Williams. 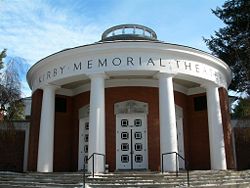 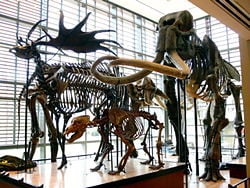 Among the notable resources at Amherst College are the Mead Art Museum, the Amherst Center for Russian Culture, Robert Frost Library, and the Amherst College Museum of Natural History. Amherst maintains a relationship with Doshisha University in Japan, which was founded by Amherst alumnus Joseph Hardy Neesima. 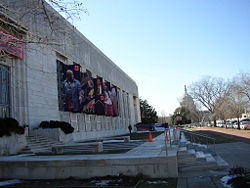 In accordance with the will of Amherst alumnus Henry Clay Folger, Amherst College is charged with the governance of the Folger Shakespeare Library in Washington, D.C. Amherst's relationship with the Folger offers various opportunities for students and faculty to study and learn and engage in cultural and arts programs. The Folger, a primary repository of rare materials from the modern period (1500-1750), holds the world's largest collection of the printed works of William Shakespeare, as well as collections of other rare Renaissance books and manuscripts. The Folger is an internationally recognized research library and center for scholarship and learning. The Folger is also an innovator in the preservation of rare materials and an award winning producer of cultural and arts programs, including theater, early music concerts (performed by the Folger Consort), poetry, exhibits, lectures, and family programs.

Amherst has a very flexible academic workload. The only course requirement mandated by the registrar is a first-year seminar during the freshman year. Although the Freshman Seminars have similar structures, focusing on critical analysis and development of argument in writing and class discussion, there are usually about sixteen different topics from which to choose. The 31 other courses that must be completed in order to receive a degree from Amherst College can be elected by the individual student. However, students must adhere to departmental course requirements to complete their major. Students can study in 33 different fields and choose from 800 classes.

Amherst is a member of the Five Colleges consortium, which allows its students to attend classes at four other Pioneer Valley institutions. These include Mount Holyoke College, Smith College, Hampshire College, and the University of Massachusetts. In addition to the 850 courses available on campus, Amherst students have an additional 6,000 classes to consider through the consortium (without paying additional tuition) and access to 8 million library volumes. The Five Colleges are geographically close to one another and are linked by buses which run between the campuses. The Five Colleges share resources and develop common programs, including the Museums10 program. The Consortium has two joint academic departments, Astronomy and Dance. The Dance department is one of the largest in the nation. The Astronomy department is internationally renowned. The Pioneer Valley schools' proximity to Amherst adds to its rich extracurricular and social life.

Nicknamed "the singing college," Amherst has many a Capella and singing groups, some of them affiliated with the college music department, including the Concert Choir, the Madrigal Singers, the Women's Chorus, and the Glee Club, which is the oldest singing group on the campus. Some of the a Capella groups are the Zumbyes, the Bluestockings, Route 9, the Sabrinas, the DQ, and Terras Irradient (the co-ed Christian Acapella group). Amherst's symphony orchestra with more than 70 members and no hired professional musicians is the only one of its size among national liberal art's colleges. A variety of other instrumental groups also rehearse and perform regularly and include: Javanese gamelan, chamber music, South Indian, and jazz. The Amherst College Ames Music Center has 25 listening and practice rooms (thirteen of which are equipped with pianos), an electronic and recording music studio, separate rehearsal space for instrumental and vocal groups, classrooms, a library, and a 500-seat recital hall that serves during the year as a performance venue for students and visiting artists.

Amherst's athletic program is the oldest in the nation. The school's sports teams are known as the Lord Jeffs; women's teams are sometimes referred to as "Lady Jeffs," though the official title covers all teams. (The women's volleyball team calls itself the Firedogs, the men's Ultimate team calls themselves Army of Darkness, the women's Ultimate team is called Sparkle Motion, and the men's and women's water polo teams are called the Yo-Ho Penguins.)

Amherst is also one of the "Little Three," along with Williams and Wesleyan. This rivalry, over one hundred years old, can be considered the oldest athletic conference in the nation. A Little Three champion is informally recognized by most teams based on the head-to-head records of the three schools, but three-way competitions are held in some of the sports.

Oh, Lord Jeffery Amherst was a soldier of the king
And he came from across the sea,
To the Frenchmen and the Indians he didn't do a thing
In the wilds of this wild country,
In the wilds of this wild country.
And for his royal majesty he fought with all his might,
For he was a soldier loyal and true,
And he conquered all the enemies that came within his sight
And he looked around for more when he was through.


Oh, Amherst, brave Amherst
'Twas a name known to fame in days of yore,
May it ever be glorious
'Til the sun shall climb the heavens no more.


Oh, Lord Jeffery Amherst was the man who gave his name
To our College upon the Hill
And the story of his loyalty and bravery and fame
Abides here among us still
Abides here among us still
You may talk about your Johnnies and your Elis and the rest
For they are names that time will never dim
But give us our only Jeffery, he's the noblest and the best
'Til the end we will stand fast for him.

Retrieved from https://www.newworldencyclopedia.org/p/index.php?title=Amherst_College&oldid=1052829
Categories:
Hidden category:
This page was last edited on 17 May 2021, at 15:30.
Content is available under Creative Commons Attribution/Share-Alike License; additional terms may apply. See Terms of Use for details.