The National Collegiate Athletic Association (NCAA, often pronounced "N-C-Double-A") is a voluntary association of about 1,200 institutions, conferences, organizations and individuals that organize the athletic programs of many colleges and universities in the United States and potentially Canadian universities beginning in 2008.[2]

Its headquarters are located in Indianapolis, Indiana, and is the largest collegiate athletic organization in the world. Because of the great popularity of college sports among spectators in the United States, it is far more prominent than most national college sports bodies in other countries.

The NCAA has grown from a small governing body to a large business enterprise. From TV rights to just its men's basketball tournament, it averages better than half a billion dollars a year in revenue, which does not include payouts from the 28 football bowls, which exceed $184 million and go to the conferences.[3]

Because of its dominating influence over all college athletics it has garnered its share of criticism for exploiting student-athletes for financial gain and for the apparent hypocrisy of allowing coaches to be paid millions of dollars while punishing the students for accepting any kind of financial gifts from alumni and fans.

The National Collegiate Athletic Association's purpose "is to govern competition in a fair, safe, equitable and sportsmanlike manner, and to integrate intercollegiate athletics into higher education so that the educational experience of the student-athlete is paramount."

It's core values are expressed as a belief in and commitment to: 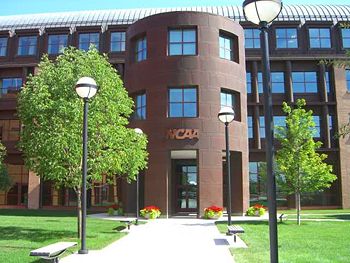 During an era when sports, particularly football, were becoming more physical and less controlled, the NCAA's predecessor, the Intercollegiate Athletic Association of the United States (IAAUS), emerged and was established on December 28, 1905, and made legal on March 31, 1906.

The purpose of the IAAUS was to set rules for amateur sports in the United States. When then-president Theodore Roosevelt's own son, Ted, broke his collar bone playing football at Harvard University, Roosevelt became aware of the growing number of serious injuries and deaths occurring in collegiate football. The 1905 college football season alone produced 18 deaths and 149 serious injuries.[5]

In response, several colleges and universities banned the violent game of football while the loosely formed football rules committee made few changes to the game. As a result, Roosevelt brought the presidents of the three major Ivy League universities, Harvard, Yale, and Princeton to several meetings at the White House in October, 1905, to discuss steps to make college athletics safer.[6]

When the death toll of student-athletes continued to rise the NCAA was formed by the IAAUS in 1910 as a rule making body to promote the safety of the athlete. Eventually the NCAA expanded and in 1921, held the first NCAA championships (Track and Field Championships). More rules committees were formed for numerous sports and the diverse organization of today ensued.

The NCAA was headquartered in the Kansas City metropolitan area from 1951 until 1999 when it moved from its last Kansas City area location at Overland Park, Kansas to a four-story, 140,000-square-foot (13,000 m²) facility on the west edge of downtown Indianapolis, Indiana. Adjacent to the headquarters is the 35,000-square-foot (3,300 m²) NCAA Hall of Champions.[7]

During its days in Kansas City, Municipal Auditorium hosted nine Final Four basketball tournaments—the most of any venue.

The NCAA's legislative structure is broken down into cabinets and committees, consisting of various representatives of its member schools. These can be broken down further into sub-committees. Legislation is then passed on to the Management Council, which oversees all the cabinets and committees, and also includes representatives from the schools, such as athletic directors and faculty advisers. Management Council legislation goes on to the Board of Directors, which consists of school presidents, for final approval.

The NCAA staff itself provides support, acting as guides, liaison, research and public and media relations.

The NCAA holds, or has held in the past, championship tournaments in the following sports:

Presently, UCLA, Stanford, and Southern California have the most NCAA championships; UCLA holds the most, winning a combined 103 team championships in men's and women's sports.[9]

The NCAA currently awards 87 national championships yearly; 44 women's, 40 men's, and three coed championships where men and women compete together (Fencing, Rifle, and Skiing). For every NCAA sanctioned sport other than Division I FBS football, the NCAA awards wooden trophies with gold, silver, and bronze plating for the first, second, and third place teams respectively; similar to the Olympics. In the case of the NCAA basketball tournaments, both semifinalists who did not make the championship game receive bronze plated trophies for third place (prior to 1982 the teams played a "consolation" game to determine third place). Similar trophies are awarded to both semifinalists in the NCAA football tournaments (which are conducted in Division I FCS and both lower divisions), which have never had a third-place game. Winning teams maintain permanent possession of these trophies unless it is later found that they were won via serious rules violations.

Starting with the 2001 season, and later in 2008, the trophies were given an extensive face lift. Starting in the 2007 basketball season, teams that make the Final Four in the Division I tournament receive bronze plated "regional championship" trophies upon winning their Regional Championship. The teams that make the National Championship game receive an additional trophy that is gold plated for the winner and silver plated for the runner-up. Starting in the mid-1990s, the National Champions in men's and women's basketball receive a very elaborate trophy sponsored by Siemens with a black marble base and crystal "neck" with a removable crystal basketball following the presentation of the standard NCAA Championship trophy. 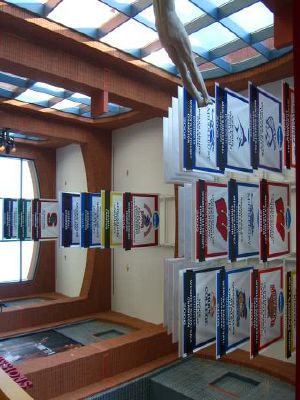 Conferences with automatic entry to the Bowl Championship Series are denoted with an asterisk (*).

The NCAA presents a number of different individual awards,[10] including:

The NCAA has current media rights contracts with CBS Sports, CBS College Sports Network, ESPN, and ESPN Plus for coverage of its 88 championships. According to the official NCAA website,[11] ESPN and its associated networks have rights to 21 championships and CBS to 67. The following are the most prominent championships and rightsholders:

Video games based on popular NCAA sports such as football and basketball are licensed by Electronic Arts.

Most NCAA events are also available online either through its own site (as in March Madness on Demand) or from ESPN360.com.

On March 1, 2008, the NCAA launched its revamped website with the address NCAA.com, changed from NCAASports.com. The site offers streamlined navigation and a quick reference to many popular links at the bottom of each page.

Until the 1980s, the association did not offer women's athletics. Instead an organization named the Association for Intercollegiate Athletics for Women governed women's collegiate sports in the United States. By 1982 however, all divisions of the NCAA offered national championship events for women's athletics and most members of the AIAW joined the NCAA.

This was mostly a result of Title IX, a United States law enacted on June 23, 1972 that states: "No person in the United States shall, on the basis of sex, be excluded from participation in, be denied the benefits of, or be subjected to discrimination under any education program or activity receiving Federal financial assistance." Although the most prominent "public face" of Title IX is its impact on high school and collegiate athletics, the original statute made no reference to athletics.

Since the advent of Title IX, schools have been increasingly threatened with discrimination lawsuits. In 1992, the U.S. Supreme Court held in Franklin v Gwinnett County Public Schools that schools which failed to comply with Title IX could be sued for compensatory and punitive damages.

By the 1980s, televised college football was a significant source of income for the NCAA. Had the television contracts the NCAA had with ABC, CBS, and ESPN remained in effect through the 1984 season, they would have generated around US$73.6 million for the Association and its members. However, in September 1981, the Board of Regents of the University of Oklahoma and the University of Georgia Athletic Association filed suit against the NCAA in district court in Oklahoma.

The plaintiffs stated that the NCAA's football television plan constituted price fixing, output restraints, boycott, and monopolizing, all of which were illegal under the Sherman Act. The NCAA argued that its pro-competitive and non-commercial justifications for the plan—protection of live gate, maintenance of competitive balance among NCAA member institutions and creation of a more attractive "product" to compete with other forms of entertainment—-combined to make the plan reasonable. In September 1982, the district court found in favor of the plaintiffs, ruling that the plan violated antitrust laws. It enjoined the Association from enforcing the contract.

Member schools pledge to follow the rules promulgated by the NCAA. Creation of a mechanism to enforce the NCAA's legislation occurred in 1952, after careful consideration by the membership.

Allegations of rules violations are referred to the NCAA's investigative staff. A preliminary investigation is initiated to determine if an official inquiry is warranted and to categorize any resultant violations as secondary or major. If several violations are found, the NCAA may determine that the school as a whole has exhibited a "lack of institutional control." The institution involved is notified promptly and may appear in its own behalf before the NCAA Committee on Infractions.

Findings of the Committee on Infractions and the resultant sanctions in major cases are reported to the institution. Sanctions will generally include having the institution placed on "probation" for a period of time, in addition to other penalties. The institution may appeal the findings or sanctions to an appeals committee. After considering written reports and oral presentations by representatives of the Committee on Infractions and the institution, the committee acts on the appeal. Action may include accepting the infractions committee's findings and penalty, altering either, or making its own findings and imposing an appropriate penalty.

Institutions violating the probationary period may be subject to being banned from participating in the sport in question for up to two years, a penalty known as the "Death Penalty."

Beyond school-issued scholarships, the NCAA is funneling $750 million over 11 years into funds designed to directly benefit athletes. Needy athletes can use the fund to cover clothing, emergency travel and educational and medical expenses. The NCAA spends more than $10 million annually on catastrophic-injury insurance.

It also offers the Special Assistance Fund, established in 1991 to help student-athletes in financial need to cover basic or emergency expenses.

There is also the Student-Athlete Opportunity Fund, established in 2003 and more loosely restricted. It's available to all athletes, regardless of financial need and whether they have exhausted eligibility or no longer compete for medical reasons. It can be used for such personal and educational expenses as travel home, computers and other school supplies, clothing, medical expenses for spouses and dependents, summer school, degree-completion programs and professional development.[13]