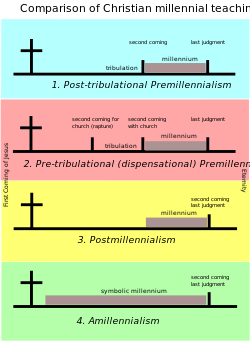 Amillennialism (Greek: a- "not" + Latin: mille "thousand" + annum "year") is a view in Christian eschatology named for its denial of a future thousand-year, physical reign of Jesus Christ on earth, as espoused in the premillennial and some postmillennial views of the Book of Revelation. By contrast, the amillennial view holds that the number of years in Revelation 20 is a symbolic number, not a literal description; that the millennium has already begun and is identical with the church age; and that while Christ's reign is spiritual in nature during the millennium, at the end of the church age Christ will return for the final judgment and the eternal order. Some postmillennialists and nearly all premillennialists hold that the word "millennium" should be taken to refer to a literal thousand-year period.

Although the term "amillennialism" was coined in the 1930s, this eschatological position already existed even in the first three centuries of the Christian era, during which premillennalism was popular. Augustine (354-430) systematized amillennialism, and it became the standard view not only of the Catholic Church but also the Greek Orthodox Church. It is also adhered to by "mainline" Protestant denominations such as the Lutheran, Reformed, and Anglican churches.

The term "amillennialism" is not well compounded, as it uses the Greek prefix a- ("not") for a Latin word. It remains unclear who coined the term. But historians generally agree that the term has been widely current since sometime in the 1930s.[1][2] Before the appearance of this term, it was apparently called "anti-millennialism" or "non-millennialism" in the 1910s and 1920s.[3][4]

Many proponents dislike the name amillennialism because it unfairly suggests that they negate the biblical reference to a millennium in Revelation 20:1-6, not believing in any millennium. Given the disdain amillennialists have for the term, it is possible that it was coined by their premillennialist opponents. Although it is true that amillennialists do not believe in a literal 1000-year kingdom on earth followed by the return of Christ, they actually believe in some kind of millennium, as will be explained below. So, they prefer alternate terms such as "nunc-millennialism" (that is, now-millennialism) or "realized millennialism." But, the acceptance and wide-spread usage of these latter names has been limited.[5]

A comparison with other types of millennialism

Amillennialism, in spite of its prefix a- ("not"), does not mean that it does not believe in a millennial kingdom at all. It only denies the existence of a literal 1000-year kingdom on earth. The millennium is a metaphor for the age of the church, and the kingdom is spiritual as Christ's reign at the right hand of God in heaven. For amillennialists, therefore, the millennial kingdom only means the church as it exists on earth, somehow pointing to the kingdom of God in heaven. This kingdom of God in heaven does not involve a direct, personal reign of Christ on earth. Rather, this kingdom in heaven is manifested only in the hearts of believers (Luke 17:20-21) as they receive the blessings of salvation (Col. 1:13-14) in the church. The age of the church, symbolized by the millennium, began with Christ's first coming and will continue until his return, and the church as a reflection of God's kingdom in heaven is considered to be far from perfect and still characterized by tribulation and suffering. For the "binding" of Satan described in Revelation has only prevented Satan from "deceiving the nations" (Rev. 20:2-3), not totally pushing him back. The forces of Satan remain just as active as always up until the return of Christ, and therefore good and evil will remain mixed in strength throughout history and even in the church, according to the amillennial understanding of the parable of the wheat and weeds (Matt. 13:24-30, 36-43).

Did you know?
Amillennialism is a view in Christian eschatology that denies a literal thousand-year, physical reign of Jesus Christ on earth

When the millennium given in Rev. 20:1-6 is interpreted by amillennialism as a metaphor for the whole age of the church, it is just like the "thousand hills" in Psalm 50:10, the hills on which God owns the cattle, are considered to refer to all hills, and the "thousand generations" in 1 Chronicles 16:15, the generations for which God will be faithful, are taken to mean all generations.

Amillennialism was popularized by Augustine in the fifth century and has dominated Christian eschatology for many centuries. Many mainline churches today continue to endorse amillennialism.

Although the term amillennialism, coined sometime in the 1930s, is a new term, its view is never new. The Dutch Reformed amillennialist L. Berkhof correctly observes that this view is "as old as Christianity."[6] It is true that premillennialism in its posttribulational form, known as "chiliasm" (from Greek chilioi, meaning "thousands"), flourished in the first three centuries of the Christian era, during which the Christians generally expected the imminent return of Christ in face of persecutions in the Roman Empire. But, amillennialism also existed side by side. Thus, Justin Martyr (c.100-165), who himself was a premillennialist, referred to the existence of differing views:

I admitted to you formerly, that I and many others are of this opinion [i.e., premillennialism], and [believe] that such will take place, as you assuredly are aware; but, on the other hand, I signified to you that many who belong to the pure and pious faith, and are true Christians, think otherwise.[7]

Pseudo-Barnabas (first century), an Apostolic Father who wrote the Epistle of Barnabas, is considered to have been an amillennialist. In the second century, the Alogi (those who rejected all of John's writings) were amillennialists. So was Caius in the first quarter of the third century, as was mentioned by Eusebius of Caesarea (c.275-339) in his Church History.[8] With the influence of Neo-Platonism and the development of the allegorical interpretation of the Bible, Clement of Alexandria (c.150-215) and Origen (c.185-c.254) denied premillennialism and presented amillennialism. Likewise, Dionysius of Alexandria, pope of Alexandria from 248-265, argued that Revelation was not written by John and could not be interpreted literally; he was amillennial.[9]

Amillennialism gained ground after Christianity was legalized in the Roman Empire. It was systematized by Augustine (354-430), and this systematization carried amillennialism over as the dominant eschatology of the Medieval period. Augustine was originally a premillennialist, but he retracted that view, claiming the doctrine was carnal.[10] The Council of Ephesus in 431 condemned premillennialism as superstition. During the Medieval period, the Catholic Church suppressed radical premillennial groups such as the Franciscan Spirituals in the thirteenth and fourteenth centuries and the Taborites in the fifteenth century.

Augustine argued that Christ's reign was spiritual and not literal and earthly, and that the church was currently living in the millennium, but interestingly he held to a literal 1,000-year millennium that could end in perhaps 650 C.E. (based on chronological calculations from the Septuagint)[11] or, at the latest, 1000 C.E. Christ, however, did not return in any of these years. So, amillennialists afterwards decided that the millennium cover any extended period of time till the return of Christ.

Amillennialism was the dominant view also of the Protestant Reformers. They disliked premillennialism perhaps because they did not like the activities of certain Anabaptist groups who were premillennialists. The Lutheran Church formally rejected chiliasm (premillennialism0 in the the Augsburg Confession of 1530, condemning those "who now scatter Jewish opinions that, before the resurrection of the dead, the godly shall occupy the kingdom of the world, the wicked being everywhere suppressed."[12] Likewise, the Swiss Reformer Heinrich Bullinger wrote up the Second Helvetic Confession of 1566, which reads: "We also reject the Jewish dream of a millennium, or golden age on earth, before the last judgment."[13] John Calvin (1509-1564) wrote in Institutes that chiliasm (premillennialism) is a "fiction" which is "too puerile to need or to deserve refutation." He interpreted the thousand-year period of Revelation 20 non-literally, applying it to "the various troubles which await the Church militant in this world."[14]

Amillennial bibliology by its use of the spiritualizing method has departed from the proper objective interpretation of the Scriptures according to the ordinary grammatical sense of the terms, to a subjective method in which the meaning is to some extent at the mercy of the interpreter. Its subjective character has undermined amillennial theology as a whole. To the extent the spiritualizing method is used, to that very extent their theology loses all uniformity and self-consistency.[16]

Many thoughtful theologians suggest that the differences of the three main types of millennialism should not divide believers as theological views are only tentative basically.[17] If amillennialism agrees with postmillennialism on the millennium followed by the return of Christ, from there they can perhaps start to communicate to each other to assess how much pessimism or optimism they should have. Also, if amillennialism and premillennialism share almost the same degree of pessimism during the millennium, from there they can communicate to each other to assess how symbolic or literal the biblical interpretation should be to reevaluate the temporal relationship between the millennium and the return of Christ.

Retrieved from https://www.newworldencyclopedia.org/p/index.php?title=Amillennialism&oldid=1052831
Categories:
Hidden category:
This page was last edited on 17 May 2021, at 15:31.
Content is available under Creative Commons Attribution/Share-Alike License; additional terms may apply. See Terms of Use for details.