Through modern filtering techniques the wet process acid can be cleaned up significantly but still isn't as pure as thermal phosphoric acid; as it may contain other acidic species such as hydrofluoric acid.

Because the triprotic dissociation of orthophosphoric acid, the fact that its conjugate bases (the phosphates mentioned above) cover a wide pH range, and because phosphoric acid/phosphate solutions are generally non-toxic, mixtures of these types of phosphates are often used as buffering agents or to make buffer solutions, where the desired pH depends on the proportions of the phosphates in the mixtures. Similarly, the non-toxic, anion salts of triprotic organic citric acid are also often used to make buffers. Phosphates are found pervasively in biology, especially in the compounds derived from phosphorylated sugars, such as DNA and RNA and adenosine triphosphate (ATP). There is a separate article on phosphate as an anion or its salts.

Upon heating orthophosphoric acid, condensation of the phosphoric units can be induced by driving off the water formed from condensation. When one molecule of water has been removed for each two molecules of phosphoric acid, the result is pyrophosphoric acid (H4P2O7). When an average of one molecule of water per phosphoric unit has been driven off, the resulting substance is a glassy solid having an empirical formula of HPO3 and is called metaphosphoric acid.[1] Metaphosphoric acid is a singly anhydrous version of orthophosphoic acid and is sometimes used as a water- or moisture-absorbing reagent. Further dehydrating is very difficult and can only be accomplished by means of an extremely strong desiccant (and not by heating alone). It produces phosphoric anhydride which has an empirical formula P2O5, although an actual molecule has a chemical formula of P4O10. Phosphoric anhydride is a solid which is very strongly moisture-absorbing and is used as a desiccant.

Phosphoric acid may be used by direct application to rusted iron, steel tools or surfaces to convert iron(III) oxide (rust) to a water soluble phosphate compound. It is usually available as a greenish liquid, suitable for dipping (acid bath), but is more generally used as a component in a gel, commonly called Naval jelly. As a thick gel, it may be applied to sloping, vertical, or even overhead surfaces. Care must be taken to avoid acid burns of the skin and especially the eyes, but the residue is easily diluted with water. When sufficiently diluted it can even be nutritious to plant life, containing the essential nutrients phosphorus and iron. It is sometimes sold under other names, such as "rust remover" or "rust killer." It should not be directly introduced into surface water such as creeks or into drains, however. After treatment, the reddish-brown iron oxide will be converted to a black iron phosphate compound coating that may be scrubbed off. Multiple applications of phosphoric acid may be required to remove all rust. The resultant black compound can provide further corrosion resistance (such protection is somewhat provided by the superficially similar Parkerizing and blued electrochemical conversion coating processes.) After application and removal of rust using phosphoric acid compounds, the metal should be oiled (if to be used bare, as in a tool) or appropriately painted, most durably by using a multiple coat process of primer, intermediate, and finish coats.

It is also used to acidify foods and beverages such as various colas, but not without controversy as to its health effects. It provides a tangy taste, and being a mass-produced chemical, is available cheaply and in large quantities. The low cost and bulk availability is unlike more expensive natural seasonings that give comparable flavors, such as ginger for tangyness, or citric acid for sourness, obtainable from lemons and limes. (However most citric acid in the food industry is not extracted from citrus fruit, but fermented by Aspergillus niger mold from scrap molasses, waste starch hydrolysates and phosphoric acid.) It is labeled as E number E338.

Phosphoric acid is used in dentistry and orthodontics as an etching solution, to clean and roughen the surfaces of teeth where dental appliances or fillings will be placed. Phosphoric acid is also an ingredient in over the counter anti-nausea medications which also contain high levels of sugar (glucose and fructose). It should not be used by diabetics without consultation with a doctor. Phosphoric acid is also used as a catalyst in the synthesis of aspirin because it provides a larger number of hydrogen ions with less contamination when compared to hydrochloric acid and sulfuric acid.[2]

Phosphoric acid, used in many soft drinks (primarily cola), has been linked to lower bone density in epidemiological studies. For example a study[5] using dual-energy X-ray absorptiometry rather than a questionnaire about breakage, provides reasonable evidence to support the theory that drinking cola results in lower bone density. This study was published in the American Journal of Clinical Nutrition. A total of 1672 women and 1148 men were studied between 1996 and 2001. Dietary information was collected using a food frequency questionnaire that had specific questions about the number of servings of cola and other carbonated beverages and that also made a differentiation between regular, caffeine-free, and diet drinks. The paper finds statistically significant evidence to show that women who consume cola daily have lower bone density. The study also suggests that further research is needed to confirm the findings.

On the other hand, a study funded by Pepsi suggests that low intake of phosphorus leads to lower bone density. The study does not examine the effect of phosphoric acid, which binds with magnesium and calcium in the digestive tract to form salts that are not absorbed, but rather, it studies general phosphorus intake.[6]

However, a controlled, clinical study by Heaney and Rafferty using calcium-balance methods found no impact of carbonated soft drinks containing phosphoric acid on calcium excretion. [7] The study compared the impact of water, milk and various soft drinks (two with caffeine and two without; two with phosphoric acid and two with citric acid)on the calcium balance of 20- to 40-year-old women who customarily consumed ~3 or more cups (680 ml) of a carbonated soft drink per day. They found that, relative to water, only milk and the two caffeine-containing soft drinks increased urinary calcium, and that the calcium loss associated with the caffeinated soft drink consumption was about equal to that previously found for caffeine alone. Phosphoric acid without caffeine had no impact on urine calcium, nor did it augment the urinary calcium loss related to caffeine. Because studies have shown that the effect of caffeine is compensated for by reduced calcium losses later in the day [8], Heaney and Rafferty concluded that the net effect of carbonated beverages – including those with caffeine and phosphoric acid—is negligible and that the skeletal effects of carbonated soft drink consumption are likely due primarily to milk displacement.

Other chemicals such as caffeine (also a significant component of popular common cola drinks) were also suspected as possible contributors to low bone density, due to the known effect of caffeine on calciuria. One other study, comprised of 30 women over the course of a week suggests that phosphoric acid in colas has no such effect, and postulates that caffeine has only a temporary effect which is later reversed. The authors of this study conclude that the skeletal effects of carbonated beverage consumption are likely due primarily to milk displacement.[9] (Another possible confounding factor may be an association between high soft drink consumption and sedentary lifestyle.)

Polyphosphoric acids and other related compounds 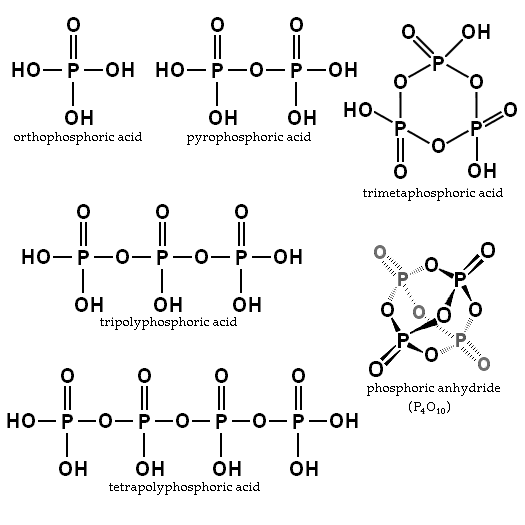 Note that each extra phosphoric unit adds 1 extra H (hydrogen) atom, 1 extra P (phosphorus) atom, and 3 extra O (oxygen) atoms. The "backbone" chain of these types of molecules consists of alternating P and O atoms covalently bonded together. A general formula for such poly-acid compounds is HO(PO2OH)xH, where x = number of phosphoric units in the molecule. The four oxygen atoms bonded to each phosphorus atom are in a tetrahedral configuration with the phosphorus in the center of the tetrahedron and the oxygens in each of the four corners.

Retrieved from https://www.newworldencyclopedia.org/p/index.php?title=Phosphoric_acid&oldid=1088987
Categories:
Hidden category:
This page was last edited on 24 November 2022, at 04:24.
Content is available under Creative Commons Attribution/Share-Alike License; additional terms may apply. See Terms of Use for details.