Buffer solutions are solutions that resist changes in pH (by resisting changes in hydronium ion and hydroxide ion concentrations) upon addition of small amounts of acid or base, or upon dilution. They usually consist of a weak acid and its conjugate base, or, less commonly, a weak base and its conjugate acid.

Buffer solutions are used in industry for chemical manufacturing and fermentation processes, and to set the proper conditions for dyeing fabrics. In research laboratories, buffers are used for chemical analyses, syntheses, and calibration of pH meters. In living organisms, these solutions maintain the correct pH for many enzymes to work. Blood plasma contains a buffer (of carbonic acid and bicarbonate) to maintain a pH of approximately 7.4.

The main component of a buffer solution, such as a weak acid or weak base, may be used as a buffering agent. The function of a buffering agent is to drive an acidic or alkaline solution to a certain pH and maintain it at that pH. As pH managers, they are important in many applications, including agriculture, food processing, medicine, and photography.

This article discusses buffer solutions prepared with water, but not other solvents. Also, these solutions are presented in terms of the Brønsted-Lowry notion of acids and bases, not the Lewis acid-base theory.

The ability of a buffer solution to resist changes in pH is the result of the equilibrium between a weak acid (HA) and its conjugate base (A−):

Any alkali added to the solution is consumed by the hydronium ions. These ions are mostly regenerated as the equilibrium moves to the right and some of the acid dissociates into hydronium ions and the conjugate base. If a strong acid is added, the conjugate base is protonated, and the pH is almost entirely restored. This is an example of Le Chatelier's principle and the common ion effect. 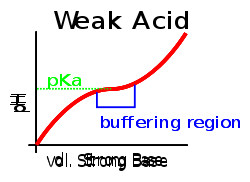 Titration of a weak acid with a strong base; the flat region at pKa is the buffering region. 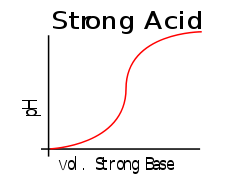 Titration of a strong acid with a strong base; note the sharp rise in pH this can not buffer.

The equilibrium reaction noted above has the following acid dissociation constant:

Simple manipulation with logarithms gives what is called the Henderson-Hasselbalch equation, which describe pH in terms of pKa:

Maximum buffering capacity is obtained when pH = pKa, and the buffer range is usually considered to be for pH = pKa ± 1.

The acid dissociation constant for acetic acid-sodium acetate is given by the equation:

and the pH of the buffer as is equal to the pKa.

To determine the effect of addition of a strong acid such as HCl, the following mathematics would provide the new pH. Since HCl is a strong acid, it is completely ionized in solution. This increases the concentration of H+ in solution, which then neutralizes the acetate by the following equation.

The consumed hydrogen ions change the effective number of moles of acetic acid and acetate ions:

After accounting for volume change to determine concentrations, the new pH could be calculated from the Henderson-Hasselbalch equation. Any neutralization will result in a small change in pH, since it is on a logarithmic scale..

Given their resistance to changes in pH, buffer solutions are very useful for chemical manufacturing and essential for many biochemical processes. The ideal buffer for a particular pH has a pKa equal to the pH desired, since a solution of this buffer would contain equal amounts of acid and base and be in the middle of the range of buffering capacity.

Buffer solutions are necessary to keep the correct pH for enzymes in many organisms to work. Many enzymes work only under very precise conditions; if the pH strays too far out of the margin, the enzymes slow or stop working and can denature, thus permanently disabling its catalytic activity. A buffer of carbonic acid (H2CO3) and bicarbonate (HCO3−) is present in blood plasma, to maintain a pH between 7.35 and 7.45.

Industrially, buffer solutions are used in fermentation processes and in setting the appropriate conditions for dyeing fabrics. They are also used in chemical analyses and syntheses, and for the calibration of pH meters.

A buffering agent adjusts the pH of an acidic or alkaline solution and stabilizes it at that pH. Buffering agents have variable properties: some are acidic, others are basic; some are more soluble than others. They are useful for a variety of applications, including agriculture, food processing, medicine, and photography.

Buffering agents and buffer solutions are similar in that they both regulate the pH of a solution and resist changes in pH. They function based on the same chemical principles. They may, however, be distinguished by the following differences:

In general, preparing a buffer solution requires either:

Make up 0.1M citric acid and 0.2M Disodium hydrogen phosphate solutions then mix as follows to make a 100 ml solution:

Retrieved from https://www.newworldencyclopedia.org/p/index.php?title=Buffer_solution&oldid=1065074
Categories:
Hidden category:
This page was last edited on 17 February 2022, at 19:18.
Content is available under Creative Commons Attribution/Share-Alike License; additional terms may apply. See Terms of Use for details.