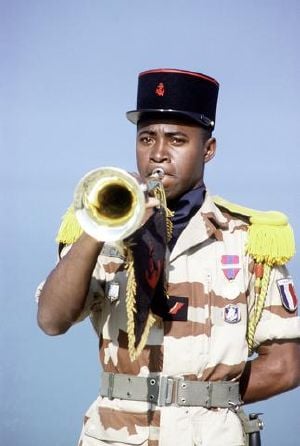 The bugle is one of the simplest brass instruments; it is essentially a small natural horn with no valves. All pitch control is done by varying the player's embouchure (the adjustment of a player's mouth to the mouthpiece), since the bugle has no other mechanism for controlling pitch. Consequently, the bugle is limited to notes within the harmonic series and cannot play normal scales.

Historically the bugle was signaling instrument, as well as an official characteristic of a hunt. The nineteenth century brought the convenience of keys and/or valves on some bugles, which created a resemblance to the trumpet and cornet and, thus, allowed for diatonic pitch sets (scales).

Not only is the bugle a simple instrument, but as a signal device it is also an instrument which serves the overall well-being of the society. Some of the best known melodies today are bugle calls, such as "Reveille" and "Taps."

History of the bugle

A shofar, ancient Hebrew precursor to the modern bugle 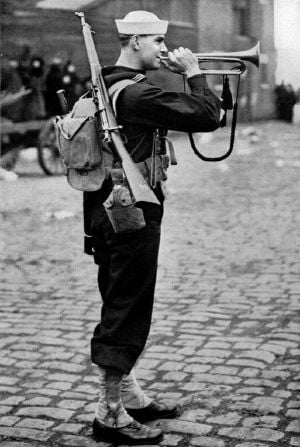 The bugle developed from early musical or communication instruments called "horns," so named because they were made of animal horns. In biblical times, the shofar, for example, was used by the Israelite priests as a call to battle, as in the famous story of the Battle of Jericho. Later, these horns were used in the liturgical music tradition at the Temple of Jerusalem.

The word "bugle" comes from the Latin word buculus (young bull) via the French word, bugleret. The first bugles developed as hunting horns. They were shaped in a coil—typically a double coil, but also a single or triple coil—similar to the modern French horn, and were used to communicate during hunts and as announcing instruments for coaches (somewhat akin to today's automobile horn). European predecessors and relatives of the developing bugle included the post horn, the Pless horn (sometimes called the "Prince Pless horn"), and the bugle horn.

Bugle as a signal device

The first verifiable formal use of a brass horn as a military signal device was the Halbmondblaser—literally, "half moon blower"—used in Hanover in 1758. It was U-shaped (hence its name) and comfortably carried by a shoulder strap attached at the mouthpiece and bell. It first spread to England in 1764, where it was gradually accepted widely in foot regiments. Cavalry did not use a proper bugle, as a rule, but rather a trumpet. This might be mistaken for a bugle today, as it could lack keys or valves, but it had a more gradual taper and a smaller bell, producing a sound more easily audible at close range but with less carrying power over distance. Today, bugle calls are often performed on trumpets.

Development of the bugle

The bugle is used mainly in the military and in drum and bugle corps, where the bugle has evolved away from its military origins, growing valves. In American drum and bugle corps, G is considered the traditional key in which bugles are pitched. Civilian drum corps were founded using equipment sold off by the military in the early 1900s, and the last official change made to the military bugle, before its role as a signaling device was rendered obsolete by the radio, was to standardize the instrument in the key of G. Bugles in other parts of the world typically were pitched in B flat or E flat.

The cornet is sometimes erroneously considered to be the "valved version" of the bugle, although it was derived from the French cornet de poste (post horn).

Variants on the bugle

Nineteenth century variants based on the standard bugle included keyed bugles and valved bugles. Keyed bugles were invented in England in the early nineteenth century, with a patent for one design, the Royal Kent bugle, taken out by Joseph Halliday in 1811. This bugle was highly popular and in wide use until c 1850, as an example used in works by Richard Willis, later bandmaster of the United States Military Academy Band at West Point. This variant of the bugle fell out of use with the invention of the valved cornet.

Since the instrument has no valves or keys in the manner of a trumpet, only the notes within a particular overtone series can be utilized by the performer's use of embrochure on the mouthpiece. The intervalic structure of the overtones series is a pitch set of intervals consisting of the octave, perfect fifth, perfect fourth, major third, minor third, minor third. On the the fundamental pitch of G3, a perfect fourth below middle C (C4), the notes in the series (known as partials) would be G3-G4-D4-G5-B5-D5-F5. These tones would thus comprise a melody or bugle call on the fundamental note of a G3.

A bugle call is a short tune, originating as a military signal announcing scheduled and certain non-scheduled events on a military installation, battlefield, or ship. A defining feature of a bugle call is that it consists only of notes from a single overtone series. This is in fact a requirement if it is to be playable on a bugle or equivalently on a trumpet without moving the valves. If a bandsman plays calls on a trumpet, for example, one particular key may be favored or even prescribed, such as: all calls to be played with the first valve down.

Some examples of bugle calls:

Many European classical composers often utilized bugle-type motifs in there symphonic music. Among the most famous of these in the classical repertory can be heard in Mozart's Posthorn Serenade, Haydn's Military Symphony (No. 100), Beethoven's Leonore Overture No. 3 and the Consecration of the House Overture, Tchaikovsky's Capriccio Italien, Richard Strauss' Festmusik der Stadt Wein, and Mahler's Third Symphony. Trumpet calls are often found in operas by composers such as Wagner and Verdi. 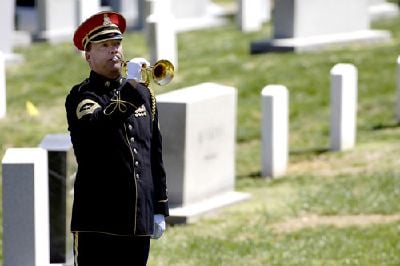 A bugler plays Taps during the funeral of Caspar W. Weinberger in Arlington National Cemetery

The bugle gained its importance because it was easy to play. Of all the military bugle calls, the most easily recognized musical segment is "Taps." This emotional song or military call came from the French military history to signal for day's end, or "Lights Out."

In 1862, when the Union General Daniel Adams Butterfield wished to honor the loss of more than 600 of his men, he called the bugler to him to create a call that would commemorate this event. The bugler, Oliver Norton relates this story:

(He) asked me to sound them on my bugle. I did this several times, playing the music as written. He changed it somewhat, lengthening some notes and shortening others, but retaining the melody as he first gave it to me. After getting it to his satisfaction, he directed me to sound that call for Taps thereafter in place of the regulation call. The music was beautiful on that still summer night and was heard far beyond the limits of our Brigade.

Words written to the tune of taps conjure nostalgic feelings for many, from military personnel to summer campers:

Day is done, gone the sun,
from the lakes, from the hills, from the sky,
all is well, safely, rest,
God is nigh.