Arlington National Cemetery is a United States National Cemetery located in Arlington, Virginia, near The Pentagon, and directly across the Potomac River from Washington, D.C. It was established during the American Civil War on the grounds of the antebellum plantation of George Washington Parke Custis, the adopted son of the nation's first president. The Arlington Mansion and 200 acres of ground immediately surrounding it were designated a military cemetery June 15, 1864, by the Lincoln Administration's Secretary of War Edwin M. Stanton.

Arlington remains an active military cemetery, averaging 5,400 funerals each year. More than 400,000 people have been laid to rest in an area covering 624 acres (2.53 km²). Veterans and military casualties from each of the nation's wars are interred in the cemetery, dating from the American Revolution. Pre-Civil War soldiers were re-interred at Arlington after 1900.

Arlington National Cemetery is administered by the Department of the Army. Arlington House, which is situated along the prominent ridges overlooking Washington, is operated by the National Park Service and serves as a memorial to Robert E. Lee. Arlington House was the pre-Civil War home of Lee and his wife, Mary Anna Custis Lee.

Nearly four million people visit Arlington National Cemetery annually. For some, it is a place to say a last farewell during funeral services for a friend or relative; for others, it is an opportunity to remember and honor the nation's war heroes; while for many the cemetery represents a chance to walk among headstones that chronicle American history. 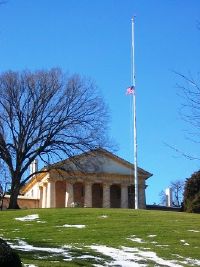 Arlington House. The flag is flown at half-staff from a half hour before the first funeral until a half hour after the last funeral each day. 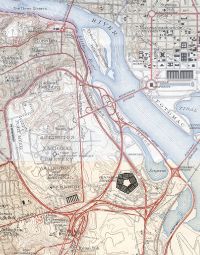 Hundreds of volunteers gather at Arlington to place more than five thousand donated Christmas wreaths on head stones in the cemetery. The annual wreath laying event began in 1991 as the fulfillment of Worcester Wreath Company owner Morrill Worcester's boyhood dream of honoring those laid to rest in the National Cemetery.

Arlington House is a nineteenth century mansion standing amid the more than 250,000 military gravesites that stretch out around it. When construction began on the mansion it was intended as a living memorial to George Washington, first President of the United State. It was built by Washington's adopted grandson, George Washington Parke Custis. Custis hired George Hadfield to design his estate. Hadfield was a British architect who had come to Washington in 1785 to help design and begin construction the U.S. Capitol. The Greek revival structure which Hadfield designed took 16 years to complete. The north wing was the first structure completed in 1802, the south wing in 1804. In 1818, the central section was completed, which connected the two wings. The exterior portico contains eight columns, each five feet in diameter at the base.

George Washington Parke Custis and his wife, Mary Lee Fitzhugh, lived in Arlington House for the rest of their lives and were buried together on the property after their deaths in 1857 and 1853, respectively. Their only child, Mary Anna Randolph Custis, married her childhood friend and distant cousin, Robert E. Lee, a graduate of the United States Military Academy at West Point. Lee and his wife lived at Arlington House until 1861.

Before the Civil War, Lee was a United States Army officer. When Fort Sumter was forced to surrender, President Abraham Lincoln offered Lee the command of the Federal army. Lee deferred the offer, waiting to see how Virginia would decide.

Virginia ratified an alliance with the Confederacy and seceded from the Union. When Virginia announced its secession, Lee resigned his commission and took command of the armed forces of the state of Virginia, and later became commander of the Army of Northern Virginia.[1] He quickly established himself as an able commander, defeating a series of Union generals, until his final defeat and surrender at Appomattox Court House.

Following the ratification of Virginia's secession, federal troops crossed the Potomac and, under Brig. Gen. Irvin McDowell, took up positions around Arlington House. Following the occupation, military installations were erected at several locations around the 1,100 acre estate, including Fort Whipple (now Fort Myer) and Fort McPherson (now Section 11 of the cemetery).

The property was confiscated by the federal government when property taxes levied against the Arlington estate were not paid in person by Mrs. Lee. The property was offered for public sale January 11, 1864, and was purchased by a tax commissioner for "government use, for war, military, charitable and educational purposes."

Arlington National Cemetery was established by Brig. Gen. Montgomery C. Meigs, who commanded the garrison at Arlington House, appropriated the grounds June 15, 1864, for use as a military cemetery. His intention was to render the house uninhabitable should the Lee family ever attempt to return. A stone and masonry burial vault in the rose garden, 20 feet wide and 10 feet deep, and containing the remains of 1800 Bull Run casualties, was among the first monuments to Union dead erected under Meigs' orders. Meigs himself was later buried within 100 yards of Arlington House with his wife, father and son; the final statement to his original order.

Lee deeply regretted the loss of his home at Arlington and continued to feel responsible for the estate. He earnestly hoped that the slaves who were left behind would be educated and freed, according to the provisions of Custis' will. The federal government dedicated a model community for freed slaves, Freedman's Village, near the current Memorial Amphitheater, on December 4, 1863. More than 1100 freed slaves were given land by the government, where they farmed and lived during and after the Civil War.

Neither Robert E. Lee, nor his wife, ever returned to Arlington House, nor did they ever attempt to publicly recover control of it. They were buried at Washington University (later renamed Washington and Lee University) where Lee had served as president. After Gen. Lee's death in 1870 his oldest son, Custis Lee, claimed that the land had been illegally confiscated and that, according to his grandfather's will, he was the legal owner. In December 1882, the U.S. Supreme Court, in a 5-4 decision, returned the property to Custis Lee, stating that it had been confiscated without due process.

On March 3, 1883, Congress purchased the property from Lee for $150,000. It became a military reservation, and Freedman's Village, but not the graves, was removed.

Features of the cemetery

The façade of the Arlington Memorial Amphitheater.

The Arlington Memorial Amphitheater, near the center of the Cemetery, is the home of the Tomb of the Unknowns. This site has also hosted the state funerals of many famous Americans, such as General of the Armies John J. "Black Jack" Pershing, General of the Air Force Henry H. "Hap" Arnold, the Unknown Soldiers, and five victims of the September 11 attacks, as well as annual Memorial Day and Veterans Day ceremonies. Every American President of the twentieth and twenty-first centuries has presided over holiday gatherings at this site.

Judge Ivory Kimball worked during several sessions of Congress as the department head of the Grand Army of the Republic in the District to get a bill through Congress to build the Amphitheatre. The bill finally went through during President Theodore Roosevelt's administration, when Congress authorized its construction March 4, 1913. Judge Kimball participated in the ground-breaking ceremony, March 1, 1915, but did not live to see his dream completed. President Woodrow Wilson placed its cornerstone October 15, 1915.

A colonnade of arched openings with attached Doric columns on the piers completely encloses the amphitheater. The architect was Thomas Hastings of the New York-based firm of Carrère and Hastings. The structure is mostly built of Imperial Danby marble from Vermont. The Memorial Display room, between the amphitheater and the Tomb of the Unknowns, uses Botticino stone, imported from Italy.

Before the Arlington Memorial Amphitheater was completed in 1921, important ceremonies were held at what is now known as the "Old Amphitheater." This structure sits where Robert E. Lee once had his gardens. The amphitheater was built in 1868 under the direction of General John A. Logan. Gen. James Garfield was the featured speaker at the Decoration Day dedication ceremony, May 30, 1868. The amphitheater has an encircling colonnade with a latticed roof that once supported a web of vines. The amphitheater has a marble dais, known as "the rostrum," which is inscribed with the U.S. national motto found on the Great Seal of the United States, E pluribus unum ("Out of many, one"). The amphitheater seats 1,500 people and has hosted speakers such as William Jennings Bryan.[2]

Tomb of the Unknowns 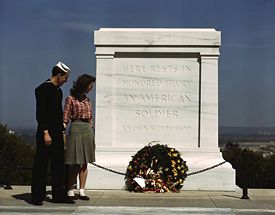 Sailor and woman at the Tomb of the Unknowns, May 1943

The Tomb of the Unknowns is a monument dedicated to American servicemen who have died without their remains being identified. The "Unknown Soldier" of the First World War is a recipient of the Medal of Honor, the Victoria Cross, and several other foreign nations' highest service awards. The U.S. Unknown Soldiers who were interred afterward are also recipients of the Medal of Honor, presented by the U.S. presidents who presided over their funerals.[3][4][5]

One of the more popular sites at the Cemetery, the tomb is made from Yule marble quarried in Colorado. It consists of seven pieces, with a total weight of 79 short tons (72 metric tons). The tomb was completed and opened to the public April 9, 1932, at a cost of $48,000.

The Tomb of the Unknowns is perpetually guarded by the U.S. Army. The 3rd U.S. Infantry Regiment ("The Old Guard") began guarding the Tomb April 6, 1948. 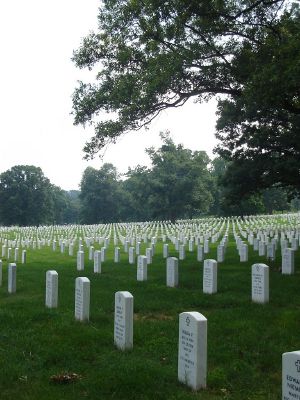 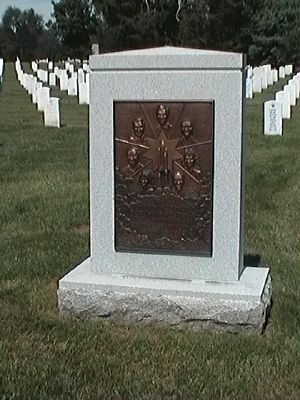 Cenotaph memorial honoring the crew of the Space Shuttle Challenger. 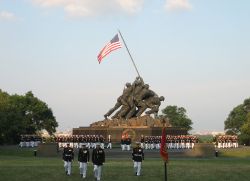 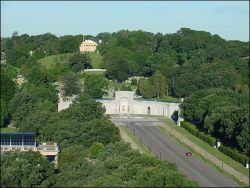 The Memorial Drive leads from the Lincoln Memorial, across the Potomac River, to the entrance to Arlington National Cemetery, with the portico of Arlington House visible at top. 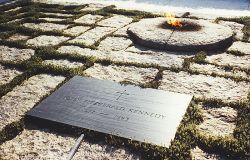 Eternal flame and marker at the grave of John F. Kennedy, 35th president of the United States.

The Women in Military Service for America (WIMSA) Memorial is the nation's first major national memorial honoring women who served in the armed forces during all eras and in all services.

Two sites frequently visited are not on the cemetery grounds, but adjacent to it. They are the Marine Corps War Memorial (commonly known as the "Iwo Jima Memorial") and the Netherlands Carillon.

There are two memorials to those killed in separate acts of terrorist violence:

Retrieved from https://www.newworldencyclopedia.org/p/index.php?title=Arlington_National_Cemetery&oldid=1059845
Categories:
Hidden category:
This page was last edited on 6 November 2021, at 12:16.
Content is available under Creative Commons Attribution/Share-Alike License; additional terms may apply. See Terms of Use for details.