Edwin McMasters Stanton (December 19, 1814 – December 24, 1869), was an American lawyer, politician, United States Attorney General in 1860-61 and Secretary of War through most of the American Civil War and Reconstruction era. Less notable, is the debate of whether Stanton served a short term as an Associate Justice on the United States Supreme Court. Although initially opposed to President Abraham Lincoln he accepted office under him "for the good of the country" and greatly admired his leadership. Stanton was a striong supporter of the Emancipation Declaration and of the rights of freed men and women, which he did much to defend. He was also a staunch supporter of the Union, and worked during and after the Civil War to ensure its survival, regarding the South's secession as illegal and unconstitutional. His management of the War Department during the conflict made a material contribution to the North's victory, which brought about an end to slavery and preserved the territorial integrity of the United States.

Stanton was born in Steubenville, Ohio, the eldest of the four children of David and Lucy (Norman) Stanton. His father was a physician of Quaker stock. After his father died in 1827, Stanton found employment in a book store for five years thereafter. Stanton would next begin his political life as a lawyer in Ohio and an antislavery Democrat. After leaving from Kenyon College in 1833 to get a job to support his family, he was admitted to the Ohio bar in 1836. He would wed Mary A. Lamson that same year and go on to have two children with her. In 1837 he entered into a partnership with Judge Benjamin Tappan, a longtime friend who would influence his views on slavery and turn him firmly against the institution and its spread. Stanton would campaign for Tappan successfully in 1838 to help him secure a seat in the United States Senate. In 1840 he would support Martin Van Buren for president and in 1844 he backed James K. Polk for the same office. In 1844 he would lose his wife and spiral into depression, though his law practice would grow in the coming years. Stanton had built a house in the small town of Cadiz, Ohio, and practiced law there until 1847, when he moved to Pittsburgh, Pennsylvania, parted ways with Tappan, and formed a partnership with Charles Shaler. He was an apt lawyer and his business thrived.[1]

In 1856, Stanton married Ellen Hutchinson (with whom he would go on to produce four more children) and moved to Washington, D.C., where he had a large practice before the Supreme Court. In 1859, Stanton was the defense attorney in the sensational trial of Daniel E. Sickles, a politician and later a Union general, who was tried on a charge of murdering his wife's lover, Philip Barton Key II (son of Francis Scott Key), but was acquitted after Stanton invoked the first use of the insanity defense in U.S. history.[1]

In 1860 he was appointed as Attorney General by President James Buchanan. He strongly opposed secession, and is credited by historians for changing Buchanan's position away from tolerating secession to denouncing it as unconstitutional and illegal.

Stanton was politically opposed to Republican Abraham Lincoln in 1860. In fact, he had supported Southern Democrat John C. Breckinridge for president, believing that only his election would prevent the fracturing of the union. After Lincoln was elected president, Stanton agreed to work as a legal adviser to the inefficient Secretary of War, Simon Cameron, whom he replaced on January 15, 1862. He accepted the position only to "help save the country." 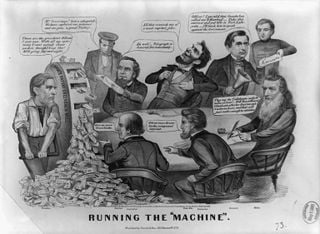 He was very effective in administering the huge War Department, but devoted considerable amounts of his energy to the persecution of Union officers whom he suspected of having traitorous sympathies for the South. On August 8, 1862, Stanton issued an order to "arrest and imprison any person or persons who may be engaged, by act, speech or writing, in discouraging volunteer enlistments, or in any way giving aid and comfort to the enemy, or in any other disloyal practice against the United States." He was friends with Union commander George B. McClellan and had the utmost faith in the man until he proved inept on the battlefield, at which point Stanton called for his withdrawal and was eventually granted this by President Lincoln.[1] 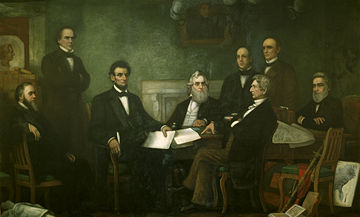 The president recognized Stanton's ability, but whenever necessary Lincoln managed to "plow around him." Stanton once tried to fire the Chief of the War Department Telegraph Office, Thomas Eckert. Lincoln prevented this by defending Eckert and told Stanton he was doing a good job. This led to Eckert keeping his job. Yet, when pressure was exerted to remove the unpopular secretary from office, Lincoln replied, "If you will find another secretary of war like him, I will gladly appoint him." Stanton became a Republican, staunchly pushing for action that would benefit the slave and free black population, and apparently changed his opinion of Lincoln. In 1864 he helped advocate Republican victory in the election. Stanton had a good relationship with commander Ulysses S. Grant, but he did not see eye to eye with William T. Sherman (who he suspected of treating freedmen unfairly) and the two would remain foes for life. Stanton was dismayed at Lincoln's assassination and would temporarily assume command immediately prior to the event. At Lincoln's death Stanton remarked, "Now he belongs to the ages," and lamented, "There lies the most perfect ruler of men the world has ever seen."[2] He vigorously pursued the apprehension and prosecution of the conspirators involved in Lincoln's assassination. These proceedings were not handled by the civil courts, but by a military tribunal, and therefore under Stanton's tutelage. Stanton has subsequently been accused of witness tampering, most notably of Louis J. Weichmann, and of other activities that skewed the outcome of the trials.[3]

Stanton continued to hold the position of secretary of war under President Andrew Johnson until 1868. Initially, the two agreed on Johnson's lenient policy until Stanton heard rumors that the freedmen were being mistreated. His relations with the president thereafter were not good, and Johnson attempted to remove Stanton from the Cabinet and replace him with General Lorenzo Thomas. Stanton, however, barricaded himself in his office, and the radicals in Congress, claiming that Johnson's actions violated the Tenure of Office Act, initiated impeachment proceedings against him. Johnson however escaped impeachment by a single vote and Stanton resigned on May 26 to be replaced by General John M. Schofield.[3]

The moment on the Supreme Court

After this, Stanton resigned and returned to the practice of law. He would successfully campaign for Grant's election to president and the next year he was appointed by President Grant to the Supreme Court, but he died four days after he was confirmed by the Senate, and taking the oath of office on his deathbed, set the record for shortest tenure on the Court. He died in Washington, D.C., and is buried there in Oak Hill Cemetery.[3]

"The acceptance of the appointment and commission by the appointee, as evidenced by the taking of the prescribed oaths, is here implied; otherwise the individual is not carried on this list of the Members of the Court. Examples: ...Edwin M. Stanton who died before he could take the necessary steps toward becoming a Member of the Court."[4] 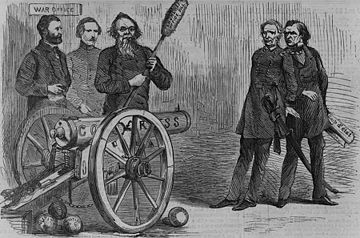 The Situation
A Harper's Weekly cartoon gives a humorous breakdown of "the situation." Stanton aims a cannon labeled "Congress" on the side at President Andrew Johnson and Lorenzo Thomas to show how he was using congress to defeat the president and his unsuccessful replacement. He also holds a rammer marked "Office Bill" and cannon balls on the floor are marked "Justice." Ulysses S. Grant and an unidentified man stand to Stanton's left.

Stanton was a staunch defender of the rights of freedmen following the Civil War and had pushed for the Emancipation Proclamation and the employment of former slaves in the Union Army during the conflict. He was adept in office and proved cordial to those sympathetic to his interests. He detested individuals who treated the freedmen unfairly and worked hard to ensure that such actions were prosecuted when possible. He was dedicated to the union and to ensuring its survival throughout his lifetime.[3]

One Dollar Treasury Notes, also called Coin Notes, of the Series' 1890 and 1891 feature portraits of Stanton on the obverse. Stanton also appears on the fourth issue of Fractional Currency, in the amount of 50 cents. Stanton Park, four blocks from the U.S. Capitol in Washington, D.C., is named for him, as is Stanton College Preparatory School in Jacksonville, Florida. A steam engine, built in 1862, was named the "E. M. Stanton" in honor of the new Secretary of War.

Retrieved from https://www.newworldencyclopedia.org/p/index.php?title=Edwin_M._Stanton&oldid=1096096
Categories:
Hidden category:
This page was last edited on 17 January 2023, at 02:46.
Content is available under Creative Commons Attribution/Share-Alike License; additional terms may apply. See Terms of Use for details.