Edwin Powell Hubble (November 20, 1889 – September 28, 1953) was one of the foremost astronomers in American history. His observations showed the existence of galaxies far beyond the Milky Way, and he found that these galaxies are moving away from one another. These observations lent support to the Big Bang theory of the origin of the universe. In addition, he formulated a system for classifying galaxies.

Born the son of John P. Hubble, an insurance executive in Marshfield, Missouri and Virginia Lee James Hubble, a descendant of American colonist Miles Standish, Edwin was the third of seven children. Hubble's family moved to Wheaton, Illinois in 1898. There he excelled in both academics and athletics, winning seven first places and a third place in a single high school track meet in 1906. That year, he also set a state record for high jump in Illinois.

Hubble graduated at the age of 16 and was accepted at the University of Chicago winning an academic scholarship. He continued to pursue athletics as an amateur boxer and he studied mathematics, physics, chemistry and astronomy at Chicago. His academic work was outstanding and in his Junior year he was awarded a scholarship in Physics. During his senior year he worked as a laboratory assistant to physicist Robert A. Millikan.

His studies at the University of Chicago concentrated on mathematics and astronomy, which led to a BS degree in 1910. Hubble also became a member of the Kappa Sigma Fraternity (later on in 1948 he was named Kappa Sigma "Man of the Year.") He spent the next three years as one of Oxford's first Rhodes Scholars, where he originally studied jurisprudence, before switching his major to Spanish and receiving the MA degree, after which he returned to the United States. Some of his British mannerisms and dress stayed with him all his life, occasionally irritating his more American colleagues.

Returning to the United States he worked as a high school teacher and a basketball coach at New Albany High School in New Albany, Indiana (near Louisville), and was a member of the Kentucky bar, although he reportedly never actually practiced law in Kentucky.[1] He served in World War I and quickly advanced to the rank of major. He returned to astronomy at the Yerkes Observatory of the University of Chicago, where he earned a PhD in 1917 with a dissertation entitled "Photographic Investigations of Faint Nebulae."

In 1919, Hubble was offered a staff position by George Ellery Hale, the founder and director of Carnegie Institution's Mount Wilson Observatory near Pasadena, California, where he remained until his death. He also served in the US Army at the Aberdeen Proving Ground during World War II. For his work there he received the Legion of Merit. Shortly before his death, Palomar's 200-inch Hale Telescope was completed; Hubble was the first to use it.

He died of a cerebral thrombosis on September 28, 1953, in San Marino, California. His wife, Grace, did not have a funeral for him and never revealed what was done with his body—it was apparently Hubble's wish to have no funeral service and be buried in an unmarked grave, or that he wanted to be cremated. As of now, the whereabouts of his remains are unknown.

The universe goes beyond the Milky Way galaxy

Hubble's arrival at Mount Wilson in 1919 coincided roughly with the completion of the 100-inch Hooker Telescope, then the world's largest telescope. At this time, the prevailing view of the cosmos was that the universe consisted entirely of the Milky Way galaxy. Using the Hooker Telescope, Hubble identified Cepheid variables (a kind of star) in several objects, including the Andromeda Galaxy, that, at the time were known as "nebulae" and had been assumed to lie within the Milky Way. His observations in 1923–1924 conclusively proved that these objects were much more distant than previously thought and were hence galaxies themselves, rather than constituents of the Milky Way. Announced on January 1, 1925, this discovery fundamentally changed the view of the universe.

Hubble also devised the most commonly used system for classifying galaxies, grouping them according to their appearance in photographic images. He arranged the different groups of galaxies in what became known as the Hubble sequence. 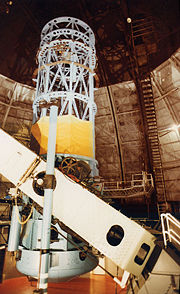 The 100 inch Hooker telescope at Mount Wilson Observatory that Hubble used to measure galaxy redshifts and a value for the rate of expansion of the universe.

Hubble was generally incorrectly credited with discovering the redshift of galaxies. This had actually been observed by Vesto Slipher in the 1910s, but the world was largely unaware of it.[2] These measurements and their significance were understood before 1918 by James Edward Keeler (Lick & Allegheny), Vesto Melvin Slipher (Lowell), and Professor William Wallace Campbell (Lick) at other observatories.

Combining his own measurements of galaxy distances with Vesto Slipher's measurements of the redshifts associated with the galaxies, Hubble and Milton L. Humason discovered a rough proportionality of the objects' distances with their redshifts. Though there was considerable scatter (now known to be due to peculiar velocities), Hubble and Humason were able to plot a trend line from the 46 galaxies they studied and obtained a value for the Hubble-Humason constant of 500 km/s/Mpc, which is much higher than the currently accepted value due to errors in their distance calibrations.[3]

In 1929, Hubble and Humason formulated the empirical Redshift Distance Law of galaxies, nowadays termed simply Hubble's law, which, if the redshift is interpreted as a measure of recession speed, is consistent with the solutions of Einstein’s equations of general relativity for a homogeneous, isotropic expanding space. Although concepts underlying an expanding universe were well understood earlier, this statement by Hubble and Humason led to wider scale acceptance for this view. The law states that the greater the distance between any two galaxies, the greater their relative speed of separation.

This discovery was the first observational support for the Big Bang theory that had been proposed by Alexander Friedmann in 1922. The observed velocities of distant galaxies, taken together with the cosmological principle appeared to show that the Universe was expanding in a manner consistent with the Friedmann-Lemaître model of general relativity. In 1931, Hubble wrote a letter to the Dutch cosmologist Willem De Sitter expressing his opinion on the theoretical interpretation of the redshift-distance relation:[4]

"... we use the term 'apparent velocities' in order to emphasize the empirical feature of the correlation. The interpretation, we feel, should be left to you and the very few others who are competent to discuss the matter with authority."

Today, the 'apparent velocities' in question are considered to be artifacts of a coordinate transformation that occurs in an expanding space. Light traveling through stretching space will experience a Hubble-type redshift, a mechanism different from the Doppler effect.

In the 1930s, Hubble was involved in determining the distribution of galaxies and spatial curvature. These data seemed to indicate that the universe was flat and homogeneous, but there was a deviation from flatness at large redshifts. According to Allan Sandage,

"Hubble believed that his count data gave a more reasonable result concerning spatial curvature if the redshift correction was made assuming no recession. To the very end of his writings he maintained this position, favouring (or at the very least keeping open) the model where no true expansion exists, and therefore that the redshift "represents a hitherto unrecognized principle of nature."[5]

There were methodological problems with Hubble's survey technique that showed a deviation from flatness at large redshifts. In particular, the technique did not account for changes in luminosity of galaxies due to galaxy evolution.

Earlier, in 1917, Albert Einstein had found that his newly developed theory of general relativity indicated that the universe must be either expanding or contracting. Unable to believe what his own equations were telling him, Einstein introduced a cosmological constant (a "fudge factor") to the equations to avoid this "problem." When Einstein heard of Hubble's discovery, he said that changing his equations was "the biggest blunder of [his] life".[6]

Other discoveries and writings

Hubble discovered the asteroid 1373 Cincinnati on August 30, 1935. He also wrote The Observational Approach to Cosmology and The Realm of the Nebulae around this time.

Hubble spent much of the latter part of his career attempting to have astronomy considered an area of physics, instead of being its own science. He did this largely so that astronomers, including himself, could be recognized by the Nobel Prize Committee for their valuable contributions to astrophysics. This campaign was unsuccessful for a long time, but the Nobel Prize Committee eventually decided that astronomical work would be eligible for the physics prize. Unfortunately for Hubble, this occurred in 1953 some months after his death. The Nobel Prize is never awarded posthumously.

Edwin Hubble's contributions to astronomy led to a revolutionary view of the cosmos. He has, for that reason, been compared to Sir Isaac Newton and Galileo. Hubble verified and established the existence of other galaxies far beyond the Milky Way. This led him to conclude that the size of our universe was much greater than previously imagined. Secondly he demonstrated that distant galaxies are speeding away from a central point and found a way to express this mathematically. In simple terms, "Hubble's Law" states that the farther a galaxy is away from us, the faster it is moving away from us. This led to the concept of an expanding universe, which supports the Big Bang theory of the creation of the universe.