During World War II, the height of his career, Miller joined the war effort by enlisting in the US Army and forming what became known as the American Band of the Allied Expeditionary Force to boost troop morale. While traveling to entertain US troops in France, Miller's plane disappeared in bad weather. His body was never found.

Although sometimes criticized by jazz purists for his commercialism and even for the carefully rehearsed perfection of his band's performances, Miller's recordings are still familiar refrains, even to generations born decades after he disappeared. Many of his records are still in circulation, and he received the Grammy Lifetime Achievement Award in 2003.

Miller was born in Clarinda, Iowa. In 1915, at the age of 11, his family moved to Grant City, Missouri. While completing elementary school, he was given his first trombone which led to his participation in the town band. In 1918, the Miller family moved again, this time to Fort Morgan, Colorado where Glenn attended high school. During his senior year, he became interested in a new musical style called "dance band music." He and several classmates decided to start their own dance band. By the time Miller graduated from high school in 1921, he had decided to become a professional musician. 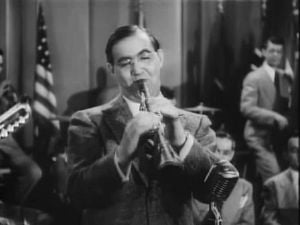 Benny Goodman was one of Miller's bandmates in New York City.

In 1923, Miller entered the University of Colorado. However, he spent most of his time away from school, attending auditions and playing any "gigs" he could get. He eventually dropped out of school and decided to concentrate on making a career as a professional musician. He later studied with Joseph Schillinger, who is credited with helping Miller create the "Miller sound," and under whose tutelage Miller composed what became his signature theme, "Moonlight Serenade."

In 1926, Miller toured with several groups and landed a position in Ben Pollack's band in Los Angeles writing several musical arrangements for the Pollack ensemble. In 1928, when the band arrived in New York City, he sent for and married his college sweetheart, Helen Burger. He was a member of Red Nichols’s orchestra in 1930, and played in the pit bands of two Broadway shows, Strike Up the Band and Girl Crazy. His bandmates included Benny Goodman and Gene Krupa.

In the mid-1930s, Miller also worked as a trombonist and arranger in The Dorsey Brothers orchestra. In 1935, he assembled an American orchestra for British bandleader Ray Noble, developing the arrangement style using lead clarinet over four saxophones that eventually became the signature of his own big band. Miller formed his own first band in 1937, although it failed to distinguish itself from the many others of the era and eventually broke up.

Miller realized that he needed to develop a unique sound and decided to emphasize the arranging style he had developed earlier in his days with Ray Noble's orchestra, in which the clarinet and tenor saxophone play the lead melody together, with three other saxophones harmonizing within a single octave. With this sound combination, the Miller band found nationwide success. Musicians included Tex Beneke, Al Klink, Chummy MacGregor, Billy May, Johnny Best, Maurice Purtill, Wilbur Schwartz, Clyde Hurley, Ernie Caceres, Ray Anthony, Hal McIntyre, and Bobby Hackett were all members of the band. Ray Eberle, Marion Hutton, Skip Nelson, Paula Kelly, Dorothy Claire, and The Modernaires were the band's seven singers.

In September 1938, the Miller band began making recordings for the RCA Victor Bluebird Records subsidiary. In the spring of 1939, the band played notable dates at the Meadowbrook Ballroom in Cedar Grove, New Jersey and the Glen Island Casino in New Rochelle, New York, and began a marked rise in popularity. TIME magazine soon remarked: "Of the 12 to 24 discs in each of today's 300,000 U.S. jukeboxes, from two to six are usually Glenn Miller's." Miller's recording of "Tuxedo Junction" sold a record-breaking 115,000 copies in its first week, and the Miller band closed the year in concert in triumph at Carnegie Hall on October 6, with Paul Whiteman, Benny Goodman, and Fred Waring sharing the bill.

Although Miller had massive popularity, he was often criticized for being too commercial. Jazz critics opined that the band's endless rehearsals and "letter-perfect playing" diminished excitement and that Miller's brand of swing shifted popular music away from the "hot" jazz bands of Benny Goodman and Count Basie towards novelty instrumentals and vocal numbers. Miller intentionally emphasized orchestrated arrangements over improvisation, but he did leave some room for his musicians to play ad lib. 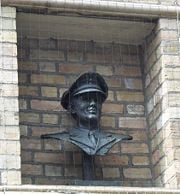 Bust of Glenn Miller outside the Corn Exchange in Bedford, where he played in World War 2.

In 1942, at the peak of his civilian career, Miller decided to join the war effort. At 38 years old, he was too old for the draft and first volunteered for the Navy only to be told that they did not need his services. Miller then wrote to the Army’s Brigadier General Charles Young and persuaded the Army to accept him so he could, in his own words, "put a little more spring into the feet of our marching men and a little more joy into their hearts and to be placed in charge of a modernized army band." After being accepted in the Army, Miller's civilian band played its last concert in Passaic, New Jersey on September 27, 1942.

Miller initially formed a large marching band that was to be the core of a network of service orchestras. However, Miller's striking innovations and his adaptations of Sousa marches for the Army Air Force Band were controversial, prompting TIME magazine to claim that he had rankled traditionalists in the field of Army music and had desecrated the march king.[1] The soldiers themselves, however, had a positive reaction to the new music and the Army gave tacit approval to the changes.

The new orchestra was first based at Yale University; from mid-1943 to mid-1944 it made hundreds of live appearances and "I Sustain the Wings" radio broadcasts for CBS and NBC. Miller felt it was important that the band be as close as possible to the fighting troops. In mid-1944 he had the group transferred to London, where it was renamed the "American Band of the Allied Expeditionary Force." While in the United Kingdom, the band gave more than 800 performances to an estimated one million Allied servicemen. After one of the band's performances, General "Jimmy" Doolittle told a then-Captain Miller, "Next to a letter from home, Captain Miller, your organization is the greatest morale builder in the ETO (European Theater of Operations)."

By February 1944, the band consisted of 30 musicians and boasted several members of his civilian orchestra, including chief arranger Jerry Gray, alongside stars from other bands such as: Ray McKinley, Peanuts Hucko, and Mel Powell. Johnny Desmond and The Crew Chiefs were normally the singers, and recordings were made with guest stars such as Bing Crosby, Irene Manning, and Dinah Shore. The Dinah Shore sessions include her version of Stardust. 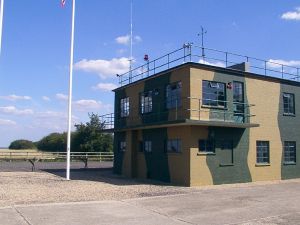 On December 15, 1944, Miller, now a major, flew from the United Kingdom to Paris to play for the soldiers who had recently liberated Paris. His plane departed from RAF Twinwood Farm, in Clapham, Bedfordshire, but disappeared over the English Channel and was never found. Miller's disappearance remains a mystery; neither his remains nor the wreckage of his plane, a single-engined Noorduyn Norseman UC-64, were ever recovered from the water. In 1985, British diver Clive Ward discovered a Noorduyn Norseman off the coast of Northern France, but his findings were unverifiable and the disappearance still remains a mystery.

Since the disappearance of Miller over 60 years ago, a number of theories have surfaced about what happened to the bandleader. One theory is that Miller's plane was accidentally struck by RAF bombers over The English Channel after an abortive air raid on Germany. The bombers, which were short on fuel, dumped four thousand pounds of bombs in a supposedly safe drop zone to lighten the load. The logbooks of Royal Air Force pilot Fred Shaw record that a small mono engined plane was seen spiraling out of control, and crashed into the water.[2]

Another story is given by the testimony of Fred W. Atkinson, Jr. on April 10, 1999 when he was 75 years old, where he reported on the crash of a plane from his unit and that fellow soldiers found the plane and the bodies of the pilots and reported, "Our crew also said that the other body definitely was that of Glenn Miller. They said there were identification papers and dogtags that were on his body."[3] 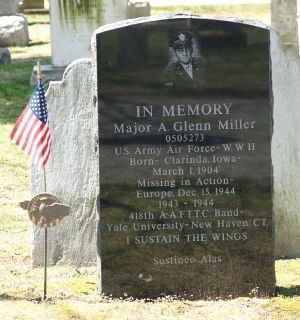 Glenn Miller was in many ways a true patriot and musical inspiration. By utilizing his talent for the sake of his fellow servicemen and women in a time of great national tribulation, he demonstrated a willingness to provide joy and comfort via his musical gifts. Also notable was his inclusion of African-American musicians in his musical circle thereby assisting in the process of using music as a vehicle for racial integration and social betterment.

Miller's music is familiar to many born long after his death, especially from its use in a number of movies. James Stewart starred as Miller in the popular The Glenn Miller Story (1953), which featured many songs from the Glenn Miller songbook, although it also took liberties with his life story.

The "International Glenn Miller Festival of Swing, Jazz & Jive" is held annually every August at Twinwood Airfield in the UK, the last place Glenn Miller was seen alive.

In the 1950s and after, RCA distributed recordings of many of Miller's earlier Chesterfield programs on albums and compact discs. A sizable representation of the recording output by the band is almost always in circulation. Miller remains one of the most famous and recognizable names of the big band era of 1935 to 1945. In 2003, he posthumously received the Grammy Lifetime Achievement Award.