Glen Travis Campbell April 22, 1936 – August 8, 2017) was a Grammy and Dove Award winning American country pop singer, guitarist, and occasional actor. He is best known for a series of hits in the 1960s and 1970s, as well as for hosting a television variety show called The Glen Campbell Goodtime Hour on CBS television. He was also nominated twice for a Golden Globe award.

Campbell, one of 12 children born just outside the tiny community of Delight in Pike County, Arkansas, started playing guitar as a youth without learning to read music.

By the time he was 18, he was touring the South as part of a group called the Western Wranglers. In 1958, he moved to Los Angeles to become a session musician. He was part of the 1959 line-up of the Champs, famous for their hit instrumental "Tequila."

Campbell soon found himself in great demand as a session musician. In the early 1960s he was part of the studio musicians' clique known as "The Wrecking Crew." Together with Hal Blaine on drums, Carol Kaye on bass guitar, guitarists like James Burton and Barney Kessel, keyboard artists such as Leon Russell and Dr. John, and arranger Jack Nitzsche, Campbell formed part of this elite group of studio musicians that defined many pop and rock recordings of the era. They were also heard on many Phil Spector's "Wall of Sound" recordings.

Campbell's guitar work can be heard on some of the biggest-selling records of the era by such artists as Bobby Darin, Ricky Nelson, The Kingston Trio, Merle Haggard, Elvis Presley, Frank Sinatra, Dean Martin, The Troggs, The Velvet Underground, The Association, Jan & Dean, and The Mamas & the Papas. Classic recordings featuring his guitar playing include: "Strangers in the Night" by Frank Sinatra, "You've Lost That Lovin' Feelin'" by The Righteous Brothers, and "I'm a Believer" by The Monkees.

Campbell was also a touring member of The Beach Boys, filling in for an ailing Brian Wilson in 1964 and 1965. He played guitar on the group's Pet Sounds album, among other recordings. On tour, he played bass and sang high harmony.

As a solo artist, Campbell had moderate success regionally with his first single "Turn Around, Look at Me." "Too Late to Worry; Too Blue to Cry" and "Kentucky Means Paradise" were similarly popular within a small section of the country audience.

In 1962, Campbell signed with Capitol Records and released two instrumental albums and a number of vocal albums during his first five years with the label. However, in 1966, he was teamed with producer Al DeLory, and together they collaborated on 1967's Dylanesque "Gentle On My Mind," written by John Hartford. The song became a major hit on both the pop and country charts and won Campbell the 1968 Grammy Award for Best (Male) Country & Western Solo Vocal Performance. 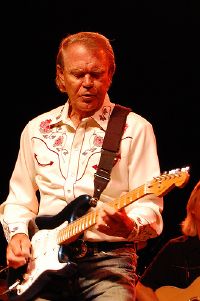 Campbell's session-work connections enabled him to act as the host to major names in the music business, including The Beatles (on film), The Monkees, Neil Diamond, Linda Ronstadt, Johnny Cash, Merle Haggard, Willie Nelson, Waylon Jennings, and Roger Miller. He helped launch the careers of Anne Murray, Mel Tillis, and Jerry Reed, who were regulars on his Goodtime Hour program. In 1973, Banjo player Carl Jackson joined Campbell's band for 12 years and went on to win two Grammy awards.

In addition to Campbell releasing a long series of singles, Campbell also appeared in the movies True Grit (1969) with John Wayne and Kim Darby and Norwood (1970) with Kim Darby and Joe Namath.

After the cancellation of his CBS series in 1972, Campbell remained a regular on network television. He acted in made-for-TV movies and hosted a number of television specials, including the 1976 Down Home, Down Under with Olivia Newton-John. Campbell co-hosted the American Music Awards from 1976–1978 and headlined the 1979 NBC special, "Glen Campbell: Back To Basics" with stars Seals and Crofts and Brenda Lee. He was a guest on many network talk and variety shows including Donny & Marie, The Tonight Show with Johnny Carson, Cher, The Redd Foxx Comedy Hour, Merv Griffin, The Midnight Special with Wolfman Jack, DINAH!, Evening at Pops with Arthur Fiedler, and The Mike Douglas Show.

In the mid-1970s, Campbell had more big hits with "Rhinestone Cowboy," "Southern Nights" (both U.S. number one hits), "Sunflower," and "Country Boy (You Got Your Feet in L.A.).

"Rhinestone Cowboy" was Campbell's largest-selling single, with over two million copies sold in a matter of months. It was later the inspiration for the 1984 Dolly Parton/Sylvester Stallone movie Rhinestone. "Rhinestone Cowboy" continues to be used in movie soundtracks and TV shows, including "Desperate Housewives" in 2006. Movies to feature the song include Daddy Day Care and High School High.

After his number one crossover chart successes in the mid to late 1970s, Campbell's career cooled off. He left Capitol Records in 1981 after a reported dispute over the song "Highwayman," written by Jimmy Webb, that the label refused to release as a single. The song would become a number one country hit in 1985 when it was performed by The Highwaymen, a quartet of country legends: Willie Nelson, Kris Kristofferson, Waylon Jennings, and Johnny Cash.

Although he would never reach the top 40-pop charts after 1978, Campbell continued to reach the country top 10 throughout the 1980s with songs such as "Faithless Love," "A Lady Like You," "Still Within The Sound of My Voice," and "The Hand That Rocks The Cradle" (a duet with Steve Wariner). Campbell made a cameo appearance in the 1980 Clint Eastwood movie Any Which Way You Can, for which he recorded the title song.

In the 1990s, Campbell's pace of recording slowed considerably, but did not stop. More than 40 of his albums reached the charts.

In 1992, he voiced the character of Chanticleer in the animated film, Rock-A-Doodle. In 1994, his autobiography, Rhinestone Cowboy, was published. 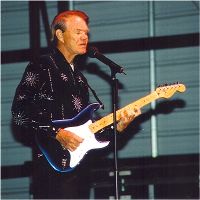 In 2005, Campbell was inducted into the Country Music Hall of Fame. In May and June, 2007, he performed with Andy Williams at the Moon River Theater in Branson, Missouri. In February 2008, he performed with the Sydney Symphony Orchestra at The Sydney Opera House in his "Farewell to Australia" tour.

It was announced in April 2008 that Campbell was returning to his signature label, Capitol, to release a new album, Meet Glen Campbell. Released in August of the same year, the album involves several different musical directions, covering tracks from artists such as Travis, U2, Tom Petty and the Heartbreakers, Jackson Browne, and the Foo Fighters.

In March 2010, a then-farewell album titled Ghost on the Canvas was announced which served as a companion to Meet Glen Campbell (2008).[1]

In January 2013, Campbell recorded his final song, "I'm Not Gonna Miss You", during what would be his last recording sessions. The song, which is featured in the 2014 documentary, Glen Campbell: I'll Be Me, was released on September 30, 2014, with the documentary following on October 24.[2] On January 15, 2015 Campbell and fellow songwriter Julian Raymond were nominated for Best Original Song at the 87th Academy Awards.

Campbell was married four times and fathered of eight children: five sons and three daughters, ranging in year of birth from 1956 to 1986. In his mid 40s he met 21-year-old Tanya Tucker. They shared a year long volatile, cocaine-enriched affair. His tumultuous relationship with the country star provided grist for the gossip mills in the early 1980s, with tales of extravagant spending and public brawls.

He married Kimberly Woolen in 1982. Woolen was a Radio City Music Hall Rockette when she and Glen met on a blind date in 1981. They had three children together.

After previously admitting to drug and alcohol abuse, Campbell had professed his sobriety to fans at concerts and in his autobiography for almost a decade when he was arrested for drunk driving on November 2003. He was sentenced to ten days in jail and community service.

Campbell was an avid golfer and hosted his namesake the Glen Campbell Los Angeles Open Golf Tournament at the Riveria Country Club from 1971-83. It was a major event on the PGA circuit. Glen was ranked in the top 15 celebrity golfers list by Golf Digest magazine in 2005.

Campbell's eldest daughter, Debby, toured across the globe with her father from 1987 and performs many of the duets made famous by Campbell with Bobbie Gentry and Anne Murray.

In June 2011, Campbell announced he had been diagnosed with Alzheimer's disease six months earlier. According to his family, symptoms of the disease had been occurring for years, becoming increasingly evident as time progressed. He performed "Rhinestone Cowboy" as a goodbye at the 2012 Grammy Awards ceremony held on February 12, 2012, his final televised on-stage performance.

Campbell went on a final "Goodbye Tour" with three of his children joining him in his backup band. His final show was on November 30, 2012, in Napa, California. After the end of the tour, Campbell entered the studio in Nashville to record what would be his final album, Adiós, which would not be revealed until five years later. According to his wife, Kim Campbell, he wanted to preserve "what magic was left", in what would be his final recordings.[3]

Campbell died of Alzheimer's disease in Nashville, Tennessee, on August 8, 2017 at the age of 81, six years after his diagnosis.

Campbell was one of the forerunners of country-crossover, whereby traditional country artists began being accepted by a broader audience. Campbell made history by winning a Grammy in both country and pop categories in 1967, with his "Gentle On My Mind" gaining country honors and "By The Time I Get To Phoenix" winning in the pop category.

He is also credited with giving country star Alan Jackson his first big break. Campbell met Jackson's wife (then a flight attendant with Delta Air Lines) at the Atlanta Airport and gave her his business card. Jackson went to work for Campbell's music publishing business in the early 1990s and later had many of his hit songs published by Campbell's company, Seventh Son Music. Campbell also served as an inspiration to Keith Urban, who cites Campbell as a strong influence on his performing career.

During his 50 years in show business, Campbell released more than 70 albums. He sold 45 million records and racked up 12 RIAA Gold albums, four Platinum albums, and one Double-Platinum album. Of his 75 trips up the charts, 27 landed in the Top 10. Campbell was hand-picked by actor John Wayne to play alongside him in the 1969 film True Grit, which gave Campbell a Golden Globe nomination for Most Promising Newcomer, and gave Wayne his only Academy Award.

On August 30, 2016, during the 10th Annual ACM Honors, Keith Urban, Blake Shelton and others performed a medley of Glen Campbell's songs in tribute to him. His wife Kim Campbell accepted the Career Achievement Award on his behalf.[4]