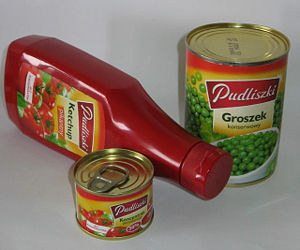 Examples of some processed foods.

Food processing is the set of methods and techniques used to transform raw ingredients into food or food into other forms for consumption by humans or animals either in the home or by the food processing industry. Food processing typically takes clean, harvested crops or slaughtered and butchered animal products and uses these to produce attractive, marketable, and often long-life food products. Similar processes are used to produce animal feed. Extreme examples of food processing include the expert removal of toxic portions of the fugu fish or preparing space food for consumption under zero gravity.

The benefits of food processing include the preservation, distribution, and marketing of food, protection from pathogenic microbes and toxic substances, year-round availability of many food items, and ease of preparation by the consumer. On the other hand, food processing can lower the nutritional value of foods, and processed foods may include additives (such as colorings, flavorings, and preservatives) that may have adverse health effects.

Food processing dates back to prehistoric ages, with crude processing methods that included slaughtering, fermenting, sun drying, preserving with salt, and various means of cooking (such as roasting, smoking, steaming, and oven baking). Salt-preservation was especially common for foods that constituted the diets of warriors and sailors, up until the introduction of canning methods. Evidence for the existence of these methods exists in the writings of the ancient Greek, Chaldean, Egyptian, and Roman civilizations, as well as archaeological evidence from Europe, North and South America, and Asia. These tried and tested processing techniques remained essentially the same until the advent of the Industrial Revolution. Examples of ready-meals also exist from the period before the Industrial Revolution, such as the Cornish pasty and Haggis.

Modern food processing technology was largely developed in the nineteenth and twentieth centuries, to serve military needs. In 1809, Nicolas Appert invented a vacuum bottling technique that would supply food for French troops, and this contributed to the development of tinning and then canning by Peter Durand in 1810. Although initially expensive and somewhat hazardous due to the lead used in cans, canned goods later became a staple around the world. Pasteurization, discovered by Louis Pasteur in 1862, was a significant advance in ensuring the microbiological safety of food.

In the twentieth century, World War II, the space race, and the rising consumer society in developed countries (including the United States) contributed to the growth of food processing with such advances as spray drying, juice concentrates, freeze drying, and the introduction of artificial sweeteners, coloring agents, and preservatives such as sodium benzoate. In the late twentieth century, products such as dried instant soups, reconstituted fruits and juices, and self-cooking meals (such as "Meal, Ready-to-Eat," or MRE, field rations) were developed.

In Western Europe and North America, the second half of the twentieth century witnessed a rise in the pursuit of convenience, as food processors marketed their products especially to middle-class working wives and mothers. Frozen foods (often credited to Clarence Birdseye) found their success in the sales of juice concentrates and "TV dinners."[1] Processors utilized the perceived value of time to appeal to the postwar population, and this same appeal contributes to the success of convenience foods today.

Beer fermenting at a brewery.

When designing processes for the food industry, the following performance parameters may be taken into account:

More and more people live in the cities far away from where food is grown and produced. In many families, the adults are work from home and therefore there is little time for the preparation of food based on fresh ingredients. The food industry offers products that fulfill many different needs: from peeled potatoes that simply need to be boiled at home to fully prepared ready meals that can be heated up in the microwave oven in a few minutes.

Benefits of food processing include toxin removal, preservation, easing marketing and distribution tasks, and increasing food consistency. In addition, it increases seasonal availability of many foods, enables transportation of delicate perishable foods across long distances, and makes many kinds of foods safe to eat by de-activating spoilage and pathogenic micro-organisms. Modern supermarkets would not be feasible without modern food processing techniques, long voyages would not be possible, and military campaigns would be significantly more difficult and costly to execute.

Modern food processing also improves the quality of life for allergy sufferers, diabetics, and other people who cannot consume some common food elements. Food processing can also add extra nutrients such as vitamins.

Processed foods are often less susceptible to early spoilage than fresh foods, and are better suited for long distance transportation from the source to the consumer. Fresh materials, such as fresh produce and raw meats, are more likely to harbor pathogenic microorganisms (for example, Salmonella) capable of causing serious illnesses.

In general, fresh food that has not been processed other than by washing and simple kitchen preparation, may be expected to contain a higher proportion of naturally occurring vitamins, fiber and minerals than the equivalent product processed by the food industry. Vitamin C, for example, is destroyed by heat and therefore canned fruits have a lower content of vitamin C than fresh ones.

Food processing can lower the nutritional value of foods. Processed foods tend to include food additives, such as flavorings and texture enhancing agents, which may have little or no nutritive value, and some may be unhealthy. Some preservatives added or created during processing, such as nitrites or sulfites, may cause adverse health effects.

Processed foods often have a higher ratio of calories to other essential nutrients than unprocessed foods, a phenomenon referred to as "empty calories." Most junk foods are processed, and fit this category.

High quality and hygiene standards must be maintained to ensure consumer safety, and failure to maintain adequate standards can have serious health consequences.

The rigorous application of industry and government endorsed standards to minimize possible risk and hazards. In the U.S., the standard adopted is HACCP.

Food processing industries and practices include the following: