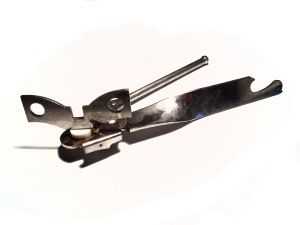 A simple butterfly can opener.

A tin can, also called a tin (especially in British English) or a can, is an air-tight container that is made of metal and used for the distribution or storage of goods. Most "tin cans" are not made solely of tin but of tin-plated steel. Opening a can requires cutting or tearing of the metal.

Cans are made to hold diverse types of contents, but the overwhelming majority are used to distribute food quickly and preserve it safely for prolonged periods. The canning of food allows people to obtain certain foods even when they are out of season or from faraway places, and to keep a stock of processed and prepared foods. In addition, canned foods can be conveniently distributed to those who are struggling with hunger and poverty.

Most cans have identical and parallel round tops and bottoms with vertical cylindrical sides. However, some contents may justify a can that has a somewhat conical overall shape. In other cases, for small volumes and certain shapes of the contents, the top and bottom may be rounded-corner rectangles or ovals.

In a three-piece construction, the can has both a top and a bottom rim. For a two-piece construction, one piece is a flat top and the other a cup-shaped piece that combines the cylindrical wall and the round base; the transition between the wall and base is usually somewhat gradual. Such cans have a single rim at the top.

In the mid-twentieth century, a few milk products were packaged in nearly rimless cans, reflecting different construction. In this case, one flat surface had a hole (for filling the nearly complete can) that was sealed after filling with a quickly solidifying drop of molten solder. However, that practice raised concerns that the milk could contain unsafe levels of lead leached from the solder plug.

Despite common use of the term tin can, most cans currently in use are not made primarily or wholly of tin. That term reflects the near-exclusive use in cans, until the last half of the twentieth century, of tin-plated steel, which combined the physical strength and relatively low price of steel with the resistance to corrosion of tin.

Use of aluminum in cans began in the 1960s. Aluminum is less costly than tin-plated steel but offers the same resistance to corrosion in addition to greater malleability, resulting in ease of manufacture. This gave rise to the two-piece can, where all but the top of the can is simply stamped out of a single piece of aluminum, rather than laboriously constructed from two pieces of steel. Often the top is tin-plated steel and the rest of the can is aluminum.

A can usually has a printed paper or plastic label glued to the outside of the curved surface, indicating its contents. Alternatively, a label may be painted directly onto the metal.

Food (such as nuts) that does not require complete sealing and some non-food products (such as engine oil) may be sold in can-like containers, where a cardboard tube fills the role of the wall, with a metal top and bottom.

In the United States, cook books will sometimes reference cans by size. These sizes are currently published by the Can Manufacturers Institute and may be expressed in three-digit numbers, as measured in whole and sixteenths of an inch for the container's nominal outside dimensions: a 307 x 512 would thus measure 3 and 7/16" in diameter by 5 and 3/4" (12/16") in height. Notice that this is not in millimeters. Older can numbers are often expressed as single digits, their contents being calculated for room-temperature water as approximately eleven ounces (#1 "picnic" can), twenty ounces (#2), thirty-two ounces (#3) fifty-eight ounces (#5) and one-hundred-ten ounces (#10 "coffee" can).[1]

The can's rim or rims (which later serve a function in opening the can) are crucial for joining the wall to a top or bottom surface. An extremely tight fit between the pieces must be accomplished to prevent leakage; the process of accomplishing this radically deforms small areas of the parts. The tubular wall and the flat piece (that will form the top or bottom of the can) have to be bent in precise ways. Eventually, a "dry" joint is formed that is so tight that welding or solder is not needed to strengthen it. 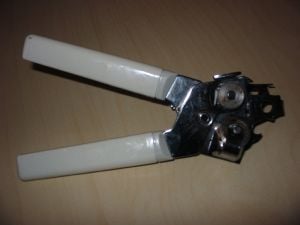 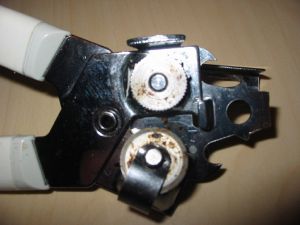 Detail on a can opener.

The first tin cans were heavy-weight containers that required ingenuity to open, using knives, chisels or even rocks. Not until cans started using thinner metal about 50 years later were any dedicated can openers developed.

Although cans of liquids such as soups and beverages may need just a small opening to remove the contents, cans with solid or semisolid contents may need removal of one side (top or bottom) to access the contents. For this purpose, many convenient can openers have been devised and marketed.

Some cans, such as those used for sardines, have a lid which is specially scored so that the metal can be broken apart by the leverage of winding it around a slotted church key.

The advent of pull tabs in beverage cans has also spread to the canning of various food products, such as pet food or nuts, allowing the convenience of opening without need for any tools or implements.

Aluminum cans have always been one of the most popular and cost-effective waste products to be recycled, due to the high energy costs of extracting aluminum from ore. Recycling old aluminum cans into new ones takes only two to four percent of the energy that would be required to make them from ore. Each aluminum can represents energy equal to half that can's volume of gasoline, enough to light a 100 watt bulb for almost four hours or power a television for three hours. In 2003, 54 billion aluminum cans were recycled. This resulted in a savings of the equivalent of 15 million barrels of crude oil, equal to United States gasoline consumption for one day.[5]

Discarded tin cans are commonly used in crafts and a number of simple toys can be made from them. Tin can telephones are common craft projects. Discarded tin can lids tend to be sharp, so care should be exercised when handling or disposing of them.

A new style of can opener[6] has recently emerged that cuts the rim neatly in half in the plane of the flat end, leaving half of the rim attached to the can and the other half attached to the flat end. No sharp edges are produced on the lid. The driving teeth are much finer than those of the classical can opener and reside at the bottom of a V-shaped groove which surrounds the rim on three sides at the point of action.

To prepare tin cans for collection, it is recommended that their tops and bottoms be removed and the cans flattened (to the extent possible). The curbside collector is able to load more flattened cans into the truck per pickup. Because costs of shipping the cans to detinning plants also are determined by truckload, loads of compacted, flattened cans are more economical to ship.

Retrieved from https://www.newworldencyclopedia.org/p/index.php?title=Tin_can&oldid=1085470
Categories:
Hidden category:
This page was last edited on 4 November 2022, at 03:55.
Content is available under Creative Commons Attribution/Share-Alike License; additional terms may apply. See Terms of Use for details.