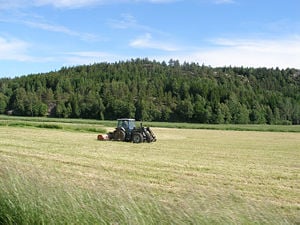 Farming with a tractor in Sweden.

The food industry is the complex network of farmers and diverse businesses that together supply much of the food consumed by the world population. Although there is no formal definition for the term, the food industry covers all aspects of food production and sale. It includes such areas as the raising of crops and livestock, manufacture of farm equipment and agrochemicals, food processing, packaging and labeling, storage, distribution, regulatory frameworks, financing, marketing, retailing, catering, research and development, and education.[1] The Economic Research Service of the U.S. Department of Agriculture (USDA)[2] uses the term food system to describe this entire enterprise.

Only subsistence farmers, those who survive on what they grow, can be considered outside the scope of the modern food industry.

The food industry covers a wide range of areas, including those listed below.

In the U.S., consumers spend approximately US$1 trillion annually for food, [3] or nearly 10 percent of the Gross Domestic Product (GDP). Over 16.5 million people are employed in the food industry. The worldwide sales of processed foods were estimated to be approximately US$3.2 trillion in 2004.

Agriculture is the process of producing food, feed, fiber and other desired products by the cultivation of certain plants and the raising of domesticated animals (livestock). The practice of agriculture is also known as "farming." In addition, scientists, engineers, inventors, and others devoted to improving farming methods and implements are also said to be engaged in agriculture. More people in the world are involved in agriculture as their primary economic activity than in any other, yet it only accounts for four percent of the world's GDP.

Food processing is the methods and techniques used to transform raw ingredients into food for human consumption. Food processing takes clean, harvested or slaughtered and butchered components and uses them to produce marketable food products.

A vast global transportation network is required by the food industry in order to connect its numerous parts. These include suppliers, manufacturers, warehousing, retailers and the end consumers. There are also those companies that, during the food processing process, add vitamins, minerals, and other necessary requirements usually lost during preparation.

With populations around the world concentrating in urban areas,[4] food buying is increasingly removed from all aspects food production. This is a relatively recent development, taking place mainly over the last 50 years. The supermarket is a defining retail element of the food industry, where tens of thousands of products are gathered in one location, in continuous, year-round supply.

Food preparation is another area where change in recent decades has been dramatic. Today, two food industry sectors are in apparent competition for the retail food dollar. The grocery industry sell fresh and largely raw products for consumers to use as ingredients in home cooking. The food service industry offers prepared food, either as finished products, or as partially prepared components for final "assembly."

Sophisticated technologies define modern food production. They include many areas. Agricultural machinery, originally led by the tractor, has practically eliminated human labor in many areas of production. Biotechnology is driving much change, in areas as diverse as agrichemicals, plant breeding, and food processing. Many other areas of technology are also involved, to the point where it is hard to find an area that does not have a direct impact on the food industry. Computer technology is also a central force, with computer networks and specialized software providing the support infrastructure to allow global movement of the myriad components involved.

As consumers grow increasingly removed from food production, the role of product creation, advertising, publicity become the primary vehicles for information about food. With processed food as the dominant category, marketers have almost infinite possibilities in product creation.

Regulation corresponds to the legal terms and restrictions imposed by government authority. Examples of regulation in the food industry include attempts to control such aspects as: standards of production, storage, and distribution; prices; wages; pollution effects; and qualifications and guarantees of employment.

Until the last 100 years, agriculture was labor intensive. Farming was a common occupation. Food production flowed from millions of farms. Farmers, largely trained from generation to generation, carried on the family business. That situation has changed dramatically. In North America, over 50 percent of the population were farm families only a few decades ago; now, that figure is around 1-2 percent, and some 80 percent of the population lives in cities. The food industry as a complex whole requires an incredibly wide range of skills. Several hundred occupation types exist within the food industry.

Research in agricultural and food processing technologies happens in great part in university research environments. Projects are often funded by companies from the food industry. There is therefore a direct relationship between the academic and commercial sectors, as far as scientific research.

Various areas of the food industry have come under criticism. For example, the excessive use of fertilizers and pesticides adversely affect the environment and human health. Likewise, a number of food additives in processed foods may be harmful to health.

The Food World is the biggest directory for food, beverage and agriculture industries, worldwide.

DuPont and Monsanto are the leading producers of pesticide, seeds, and other farming products.

Bunge is a global soybean exporter and is also involved in food processing, grain trading, and fertilizer.

Dole Food Company is the world's largest fruit company. Chiquita Brands International, another U.S. based fruit company, is the leading distributor of bananas in the United States. Sunkist Growers, Incorporated is a U.S. based grower’s cooperative.

Sysco Corporation, mainly catering to North America and Canada, is one of the world's largest food distributors.

Retrieved from https://www.newworldencyclopedia.org/p/index.php?title=Food_industry&oldid=1096766
Categories:
Hidden category:
This page was last edited on 21 January 2023, at 15:44.
Content is available under Creative Commons Attribution/Share-Alike License; additional terms may apply. See Terms of Use for details.