In biochemistry, fermentation is an enzyme-catalyzed, energy-generating process in which organic compounds act as both donors and acceptors of electrons. Fermentation can occur in the absence of oxygen, and the term is sometimes defined as the pathway in cells by which fuel molecules are broken down anaerobically.

Sugars are the common substrate of fermentation, and typical examples of fermentation products are ethanol, lactic acid, and hydrogen. However, more exotic compounds can be produced, such as butyric acid and acetone.

Glycolysis is an important type of fermentation that is common to muscle cells, yeast, some bacteria, and plants. In glycolysis, the six-carbon sugar glucose (Glc) is oxidized to two molecules of pyruvic acid (Pyr), yielding a small net gain of chemical energy (ATP) to power cellular function. In the absence of oxygen, there are two main pathways for the pyruvate end-product:

In an industrial context, the term fermentation is used more broadly to refer to the bulk growth of microorganisms on a growth medium. There are many microbiological processes that occur in the presence of air (aerobically) while yielding incomplete oxidation products. Examples include the formation of acetic acid (vinegar) from alcohol by vinegar bacteria, and of citric acid from sugar by certain molds (such as Aspergillus niger). These microbial processes have gained industrial importance, and are often referred to as fermentations, although they do not conform to Louis Pasteur's concept of fermentation as a decomposition in the absence of air.

People have devised innumerable ways to utilize fermentation to produce food and drinks, creating such products as beer, wine, cheese, yogurt, sauerkraut, miso, soy sauce, kimchi, and so forth.

The reactions of fermentation vary according to the fuel molecule and end-product involved. In the chemical equation below, the sugar is glucose (C6H12O6), and the end-product is ethanol (2C2H5OH):

The equation can be written verbally as follows:

In its strictest sense, fermentation is the anaerobic metabolic breakdown of a nutrient molecule, such as glucose, without net oxidation. Fermentation does not release all the available energy in a molecule; it merely allows glycolysis (a process that yields two ATP per glucose) to continue by replenishing reduced coenzymes.

Fermentation products contain chemical energy (i.e., they are not fully oxidized), but they are considered waste products since they cannot be metabolized further without the use of oxygen (or other more highly-oxidized electron acceptors). A consequence is that the production of ATP by fermentation is less efficient than oxidative phosphorylation, where pyruvate is fully oxidized to carbon dioxide. Fermentation produces two ATP molecules per molecule of glucose compared to approximately 36 ATP yielded by aerobic respiration.

Although human metabolism is primarily aerobic, in the partial or complete absence of oxygen (for example, in overworked muscles that are starved of oxygen or in infarcted heart muscle cells), pyruvate can be converted to the waste product lactate, donating its hydrogen to pyruvate. This reaction, which is an example of a fermentation, is a solution to maintaining the metabolic flux through glycolysis in the absence of oxygen or when oxygen levels are low. While fermentation is helpful during short, intense periods of exertion, it is not sustained over extended periods in complex aerobic organisms. In humans, for example, lactic acid fermentation provides energy for a period ranging from 30 seconds to 2 minutes.

The final step of fermentation, the conversion of pyruvate to an end-product, does not produce energy. However, it is critical for an anaerobic cell since it regenerates nicotinamide adenine dinucleotide (NAD+), which is required to sustain the flow through the glycolytic pathway in anaerobic conditions.

There are several types of fermentations in which pyruvate and NADH are anaerobically metabolized to yield any of a variety of products, with an organic molecule acting as the final hydrogen acceptor. For example, the bacteria involved in making yogurt simply reduce pyruvate to lactic acid. In organisms such as brewers' yeast, a carboxyl group is first removed from pyruvate to form acetaldehyde and carbon dioxide; the acetaldehyde is then reduced to yield ethanol and NAD+. Anaerobic bacteria are capable of using a wide variety of compounds other than oxygen as terminal electron acceptors.

Vinegar (acetic acid) is the direct result of bacterial metabolism. (Bacteria need oxygen to convert the ethanol to acetic acid.) In milk, the acid coagulates the casein, producing curds. In pickling, the acid preserves the food from pathogenic and putrefactive bacteria. 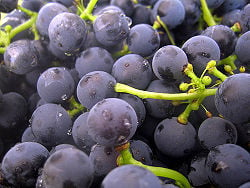 Grapes covered in yeast growth observable as a white film, also known as the blush.

Fermentation in food production typically refers to the conversion of sugar to alcohol using yeast under anaerobic conditions. A more general definition of fermentation is the chemical conversion of carbohydrates into alcohols or acids. Fermentation is used to produce wine, beer, and vinegar. It is also employed in food preservation to create lactic acid in sour foods, such as pickled cucumbers, kimchi, and yogurt. Bacteria, often in combination with yeasts and molds, are used in the preparation of fermented foods such as cheese, pickles, soy sauce, sauerkraut, vinegar, wine, and yogurt.

Food can be preserved by fermentation, since fermentation can make conditions unsuitable for undesirable microorganisms. For example, in pickling, the acid produced by the dominant bacteria inhibit the growth of other microorganisms.

Relation to advances in biochemistry

Although the biochemistry of fermentation was fully elaborated only in the twentieth century, alcoholic fermentation has been practiced since antiquity. By 1500 B.C.E., the production of beer from germinating cereals (malt) and the preparation of wines from crushed grapes were established practices in a large part of the Middle East. The scientific discipline of biochemistry, particularly the study of enzymes, has emerged in part from an earlier interest in food and beverage production. One of the earliest laboratories established for the study of biochemistry was the Carlsberg Laboratory founded in Copenhagen in 1875 and financed by the brewing family of Jacob Christian Jacobsen. The species of yeast used to make pale lager (Saccharomyces carlsbergensis) was isolated at the Laboratory and named after it. The concept of pH was also developed there, and its members made significant contributions to the study of protein chemistry. 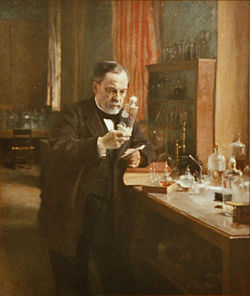 Louis Pasteur in his laboratory. Painting by Albert Edelfelt (1885).

French chemist Louis Pasteur was the first zymologist (an early term for a scientist who studies fermentation) when in 1857 he connected yeast to the process of fermentation. Pasteur demonstrated that fermentation is caused by the growth of microorganisms, and that the growth of microorganisms in nutrient broths is not due to spontaneous generation (a theory which held that complex, living organisms can be generated from decaying organic substances).

In the nineteenth century, Pasteur used the term fermentation in a narrow sense to describe the changes brought about by yeasts and other microorganisms growing in the absence of air (anaerobically); he also recognized that ethyl alcohol and carbon dioxide are not the only products of fermentation. Pasteur originally defined fermentation as respiration without air. After performing careful research, he concluded, "I am of the opinion that alcoholic fermentation never occurs without simultaneous organization, development and multiplication of cells....If asked, in what consists the chemical act whereby the sugar is decomposed...I am completely ignorant of it."

The German Eduard Buchner, winner of the 1907 Nobel Prize in chemistry, later determined that fermentation was actually caused by a yeast secretion that he termed zymase. The experiment for which Buchner won the Nobel Prize consisted of producing a cell-free extract of yeast cells and showing that this "press juice" could ferment sugar. This finding dealt yet another blow to vitalism by demonstrating for the first time that fermentation could occur outside living cells.

In the 1920s, scientists discovered that, in the absence of air, extracts of muscle catalyze the formation of lactate from glucose; in addition, they learned that the same intermediate compounds formed in the fermentation of grain are produced by muscle. This discovery revealed an underlying unity in biochemistry: fermentation reactions are not peculiar to the action of yeast but also occur in many other instances of glucose utilization. The elucidation of the glycolytic pathway in the early decades of the twentieth century involved the pioneering efforts of Gustav Embden, Otto Meyerhof, Carl Neuberg, Jacob Parnas, Otto Warburg, and Gerty and Carl Cori.

Retrieved from https://www.newworldencyclopedia.org/p/index.php?title=Fermentation&oldid=679596
Categories:
Hidden category:
This page was last edited on 2 April 2008, at 06:53.
Content is available under Creative Commons Attribution/Share-Alike License; additional terms may apply. See Terms of Use for details.