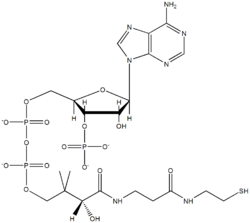 Coenzyme is any of a diverse group of small organic, non-protein, freely diffusing molecules that are loosely associated with and essential for the activity of enzymes, serving as carrier molecules that transfer chemical groups. Coenzymes are sometimes referred to as cosubstrates. These molecules are substrates for enzymes and do not form a permanent part of the enzymes' structures.

The term coenzymes is sometimes defined in such a way as to include prosthetic groups (Alberts et al. 1989; Bender and Bender 2005; McGraw-Hill 2005). However, prosthetic groups are non-protein components that are bound tightly (covalently linked) to enzymes—such as iron-sulfur centers, flavin, or haem groups. The International Union of Pure and Applied Chemistry (IUPAC) draws a distinction between coenzymes and prosthetic groups. IUPAC defines a coenzyme as a low-molecular-weight, non-protein organic compound that is loosely attached, participating in enzymatic reactions as a dissociable acceptor of chemical groups or electrons; a prosthetic group is defined as a tightly bound, nonpolypeptide unit in a protein (IUPAC 1997a, 1997b). Both coenzymes and prosthetic groups are types of the broader group of cofactors, which are any non-protein molecules (usually organic molecules or metal ions) that are required by an enzyme for its activity (IUPAC 1997c). This article will restrict coenzyme to the definition used by IUPAC.

In metabolism, coenzymes are involved in both group-transfer reactions, for example coenzyme A and ATP, and redox reactions, such as coenzyme Q10 and NAD+. Coenzymes are consumed and recycled continuously in metabolism, with one set of enzymes adding a chemical group to the coenzyme and another set removing it. For example, enzymes such as ATP synthase continuously phosphorylate adenosine diphosphate (ADP), converting it into ATP, while enzymes such as kinases dephosphorylate the ATP and convert it back to ADP.

Coenzymes molecules are often vitamins or are made from vitamins. Many coenzymes contain the nucleotide adenosine as part of their structures, such as ATP, coenzyme A, and NAD+.

Coenzymes are vastly important in life. Some, such as ATP and NADH, form a core part of metablolism and reflect the unity in nature, being present in all known forms of life.

Metabolism involves a vast array of chemical reactions, but most fall under a few basic types of reactions that involve the transfer of functional groups (Mitchell 1979). This common chemistry allows cells to use a small set of metabolic intermediates to carry chemical groups between different reactions (Wimmer and Rose 1978). These group-transfer intermediates are the coenzymes.

Each class of group-transfer reaction is carried out by a particular coenzyme, which is the substrate for a set of enzymes that produce it, and a set of enzymes that consume it. An example of this are the dehydrogenases that use nicotinamide adenine dinucleotide (NADH) as a cofactor. Here, hundreds of separate types of enzymes remove electrons from their substrates and reduce NAD+ to NADH. This reduced coenzyme is then a substrate for any of the reductases in the cell that need to reduce their substrates (Pollak et al. 2007).

Coenzymes are therefore continuously recycled as part of metabolism. As an example, the total quantity of ATP in the human body is about 0.1 mole. This ATP is constantly being broken down into ADP, and then converted back into ATP. Thus, at any given time, the total amount of ATP + ADP remains fairly constant. The energy used by human cells requires the hydrolysis of 100 to 150 moles of ATP daily, which is around 50 to 75 kilograms. Typically, a human will use up their body weight of ATP over the course of the day (Di Carlo and Collins 2001). This means that each ATP molecule is recycled 1000 to 1500 times daily.

Acting as coenzymes in organisms is the major role of vitamins, although vitamins do have other functions in the body (Bolander 2006). Coenzymes are also commonly made from nucleotides, such as adenosine triphosphate, the biochemical carrier of phosphate groups, or coenzyme A, the coenzyme that carries acyl groups. Most coenzymes are found in a huge variety of species, and some are universal to all forms of life. An exception to this wide distribution is a group of unique coenzymes that evolved in methanogens, which are restricted to this group of archaea (Rouvière and Wolfe 1988).

The first coenzyme to be discovered was NAD+, which was identified by Arthur Harden and William Youndin and reported on in 1906 (Harden and Young 1906). They noticed that adding boiled and filtered yeast extract greatly accelerated alcoholic fermentation in unboiled yeast extracts. They called the unidentified factor responsible for this effect a coferment. Through a long and difficult purification from yeast extracts, this heat-stable factor was identified as a nucleotide sugar phosphate by Hans von Euler-Chelpin (1930). Other coenzymes were identified throughout the early twentieth century, with ATP being isolated in 1929, by Karl Lohmann (1929), and coenzyme A being discovered in 1945, by Fritz Albert Lipmann (1945).

The functions of coenzymes were at first mysterious, but in 1936, Otto Heinrich Warburg identified the function of NAD+ in hydride transfer (Warburg and Christian (1936). This discovery was followed in the early 1940s by the work of Herman Kalckar, who established the link between the oxidation of sugars and the generation of ATP (Kalckar 1974). This confirmed the central role of ATP in energy transfer that had been proposed by Fritz Albert Lipmann in 1941 (Lipmann (1941). Later, in 1949, Morris Friedkin and Albert L. Lehninger proved that the coenzyme NAD+ linked metabolic pathways, such as the citric acid cycle and the synthesis of ATP (Friedkin and Lehninger 1949).

Coenzymes, such as ATP and NADH, are present in all known forms of life and form a core part of metabolism. Such universal conservation indicates that these molecules evolved very early in the development of living things (Chen et al. 2007). At least some of the current set of coenzymes may therefore have been present in the last universal ancestor, which lived about 4 billion years ago (Koch 1998; Ouzounis and Kyrpides 1996).

Coenzymes may have been present even earlier in the history of life on Earth (White 1976). Interestingly, the nucleotide adenosine is present in coenzymes that catalyse many basic metabolic reactions such as methyl, acyl, and phosphoryl group transfer, as well as redox reactions. This ubiquitous chemical scaffold has therefore been proposed to be a remnant of the RNA world, with early ribozymes evolving to bind a restricted set of nucleotides and related compounds (Saran et al. 2003; Jadhav and Yarus 2002). Adenosine-based coenzymes are thought to have acted as interchangeable adaptors that allowed enzymes and ribozymes to bind new coenzymes through small modifications in existing adenosine-binding domains, which had originally evolved to bind a different cofactor (Denessiouk et al. 2001). This process of adapting a pre-evolved structure for a novel use is referred to as exaptation.