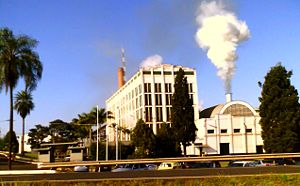 The Santa Elisa sugarcane processing plant is one of the largest and oldest in Brazil. Molasses is a byproduct of the processing of sugarcane. Photo by Renato M.E. Sabbatini

Molasses is generally defined as a thick, dark syrup that is the final liquid residue obtained in the preparation of sucrose (commercial sugar) by the repeated process of evaporation, crystallization, and the centrifugation of juices from either sugarcane or sugar beets. The refining process leaves a thick liquid that still contains a significant percentage of sucrose, glucose, and fructose (perhaps 20-30 percent sucrose and 15-25 percent glucose and fructose). This definition has been extended in the livestock feed industry to include any liquid ingredient that contains an excess of 43 percent sugar (which may come from other plant sources, such as pressed wood pulp, sorghum gain, and various types of fruit, like pomegranates).

While commonly used in the past as a standard cooking sweetener, molasses largely has been replaced by refined sugar. Despite this change, molasses remains an important ingredient in foods such as gingerbread and in the production of the alcoholic beverage rum. It is also a chelating agent, and as such has been used for rust removal and soil enrichment, in addition to its other uses as an additive in livestock feed, and the production of ethanol, industrial alcohol, and yeast.

On the other hand, molasses also was influential in the creation of the slave trade triangle between Africa, the Caribbean, and New England, where people were traded like commodities for molasses.

Molasses has been used since as early as 500 B.C.E. in what is now the nation of India. The term originally comes from the Portuguese word "melaço," which is in turn taken from the Latin mel, meaning honey.

Molasses has been used since as early as 500 B.C.E. in India (created from cane).

In the seventeenth century, it was used in order to trade for slaves being brought from Africa to the Caribbean. The molasses was then carried to New England in colonial America, where much of it was turned into rum, some of which was sent back to Africa.

Aside from being used in this trading triangle, molasses has also been significant in two other notable events of United States history. The Molasses Act of 1733 imposed a duty on rum, sugar, and molasses imported from non-British colonies into the North American colonies. This secured a practical monopoly of the North American sugar market for the British West Indies sugarcane growers, who were not competing successfully against the non-British colonies. Molasses also figured greatly in the Boston Molasses Flood, which occurred on January 15, 1919. On this date, a steel vat full of molasses (which had been used to create rum and industrial alcohol for ammunition during the war) burst, dumping about 2.3 million gallons of molasses into Boston, killing 21 people and resulting in more than $1 million in property damages, as well as months of clean-up work.

While molasses used to be the most popular sweetener in the United States, after World War I, refined sugar replaced it as a cheaper alternative.

As a syrup, molasses is a thick, viscous liquid, containing a large amount of dissolved sugars, but showing little tendency to deposit crystals. There are several types of molasses recognized.

Sulfured molasses is made from young green sugar cane and is treated with sulfur dioxide fumes, which act as a preservative during the sugar extraction process (although unsulfured varieties can be made from more mature raw materials, and the juice is clarified as it is processed). Generally, the sugar cane plant is harvested and stripped of its leaves. Its juice is then extracted from the canes, usually by diffusion or milling, and boiled until the water evaporates and the syrup remains. This substance is then put into a centrifuge in order to separate the raw sugar crystals from the syrup, and what is left is the molasses.

The results of this first boiling and removal of sugar crystals is called light molasses, which is often added to syrups, baked goods, marinades, and sauces, and has the highest sugar content (since comparatively little sugar has been extracted from the juice). Dark molasses (or robust, full flavored, or cooking molasses) comes from the second boiling and sugar extraction and is used to flavor sweets (such as shoofly pie and gingerbread) and baked beans and sauces, like barbecue sauce. Light and dark molasses can generally be used interchangeably.

The third boiling of the sugar syrup creates blackstrap molasses, which is very dark and thick, and is often found in health food stores, since it contains vitamins and minerals, such as calcium, magnesium, potassium, and iron. Blackstrap is also used in the manufacture of livestock feed.

Another type of molasses is made from sugar beets. Only the syrup left from the final boiling and extraction is called molasses, while the intermediate syrups are referred to as high green and low green (which are recycled within the crystallization plant). Beet molasses is about 50 percent sugar by dry weight (made up of sucrose, glucose, and fructose), with the non-sugar content including many salts, such as calcium, potassium, oxalate, and chloride. These are present because of concentration from the original plant material or chemicals used in the processing, making it unpalatable and mainly used as an additive to animal feed or as a fermentation feedstock (such as for yeast).

In some parts of the United States, sorghum molasses (or sorghum syrup) is also referred to as molasses. It comes from the juice of the stalk of the sorghum plant, which is a cereal grain that is grown specifically for molasses, rather than refined sugar.

Treacle is the term used primarily in Great Britain for the byproduct of sugar refining. There are two types of treacle, the first of which is dark treacle (which is generally interchangeable with the term molasses) and the second being light treacle (which has a lighter flavor, is also called golden syrup, and is used in the desert treacle tart).

In the Middle East, molasses is made from different plants, including grapes, pomegranates, mulberries, carob trees (the pulp in the pods of the tree is used for the molasses), and dates.

Other types of molasses primarily recognized in the livestock feed industry include citrus molasses (which is obtained from the manufacture of dried citrus pulp), hemicellulose extract (a byproduct of the creation of pressed wood, which contains pentose and hexose sugars), and starch molasses (the byproduct of the creation of dextrose from starch that comes from either corn or grain sorghums, where the starch has been treated by enzymes or acid).

Cane molasses is commonly used in baking, and there are a number of substitutes that can be used. One cup of molasses can be replaced by one cup of honey, or three-fourths of a cup of firmly packed brown sugar, or one cup of dark corn syrup, or one cup of pure maple syrup.

Molasses has several other uses besides in cooking, partially because molasses is a chelating agent (which means that it is a substance whose molecules can form several bonds to a single metal ion). As a result of this property, a rusty object placed in a solution of one part molasses to nine parts water will lose its rust after about two weeks (although the rusty object must be degreased, and this process is not safe for zinc die cast metal).

Molasses also has been used in garden soil in order to “unlock the potential of fertilizers.” It has also been shown to be a potential alternative to corn (maize) in the United States as an ethanol source, since it is cost competitive with corn. However, it is bulky and costly to transport, which makes it most feasible if it is to supply an ethanol facility that's located at a sugar processing plant.

Molasses can also be used in the production of industrial alcohol (denatured alcohol that is unfit for consumption), and can be fermented and distilled into the liquor rum. Molasses is also combined with tobacco (primarily in the Middle East and Asia) in order to create massel, which is used by many water pipe smokers.

Retrieved from https://www.newworldencyclopedia.org/p/index.php?title=Molasses&oldid=985255
Categories:
Hidden category:
This page was last edited on 12 November 2014, at 15:53.
Content is available under Creative Commons Attribution/Share-Alike License; additional terms may apply. See Terms of Use for details.