The structure of a nitrile group

A nitrile is any organic compound that has a -C≡N functional group. The -C≡N functional group is called a nitrile group. In the -CN group, the carbon and nitrogen atoms are linked to each other by what is called a "triple" covalent bond. To indicate the presence of a nitrile group in a molecule, chemists use the prefix cyano when naming the molecule.

Various nitriles serve important functions. For instance, benzonitrile is useful as a solvent and is a precursor for the synthesis of other materials. Another common nitrile, named acrylonitrile, can be converted to the polymer known as polyacrylonitrile, which makes up acrylic fibers. Acrylonitrile is also used in the synthesis of certain nylons and for the industrial manufacture of acrylamide and acrylic acid.

Hydrogen cyanide was first synthesized in 1782 by Carl Wilhelm Scheele, who was killed in an attempt to get the anhydrous compound.[1] Joseph Louis Gay-Lussac was the first to prepare the pure acid in 1811, and Friedrich Wöhler and Justus von Liebig were the first to prepare the nitriles benzoyl cyanide and benzonitrile in 1832. Théophile-Jules Pelouze synthesized propionitrile in 1834.

Nitriles can be prepared by any of the following methods of organic chemistry: 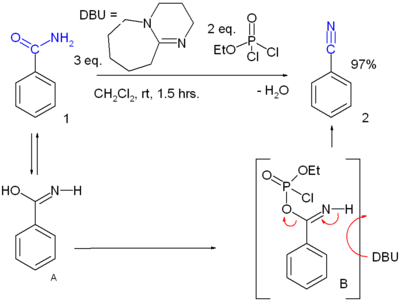 Two intermediates in this reaction are amide tautomer A and its phosphate adduct B.

In one study,[3] an aromatic or aliphatic aldehyde is reacted with hydroxylamine and anhydrous sodium sulfate in a dry media reaction for a very small amount of time under microwave irradiation through an intermediate aldoxime.

Nitrile groups in organic compounds can undergo various reactions when subject to certain reactants or conditions. A nitrile group can be hydrolyzed, reduced, or ejected from a molecule as a cyanide ion.

Uses of some nitriles