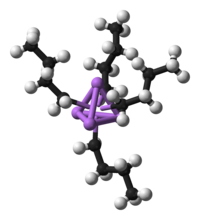 A model of a molecule of n-butyllithium, an organometallic compound.

Organometallic compounds have a variety of practical uses. For example, ferrocene and MMT (methylcyclopentadienyl manganese tricarbonyl) are added to gasoline as antiknock agents. The industrial manufacture of acetic acid from methanol and carbon monoxide (by the Monsanto process) involves the use of a rhodium-carbonyl complex. A titanium-based organometallic compound, called the Ziegler-Natta catalyst, is used in the production of polyethylene and other polymers. Also, the ruthenium-BINAP complex is used in the production of fine chemicals and pharmaceuticals.

Biological systems contain a variety of organometallic compounds. Examples include hemoglobin and myoglobin, each of which contains an iron center bonded to a porphyrin ring; and chlorophyll, with magnesium at the center of a chlorin ring.

In the absence of direct structural evidence for a carbon–metal bond, some compounds are not considered to be organometallic. Thus, the status of compounds in which the canonical anion has a delocalized structure in which the negative charge is shared with an atom more electronegative than carbon (as in enolates) may vary with the nature of the anionic moiety, the metal ion, and possibly the medium.

Depending mostly on the nature of the metallic ion and somewhat on the nature of the organic compound, the character of the bond may either be ionic or covalent. Organic compounds bonded to sodium or potassium are primarily ionic. Those bonded to lead, tin, or mercury, are considered as having covalent bonds, and those bonded to magnesium or lithium have bonds with intermediate properties.

Organometallic compounds with bonds that have characters in between ionic and covalent are very important in industry, as they are both relatively stable in solution and relatively ionic to undergo reactions. Two important classes are organolithium compounds and Grignard reagents. In certain organometallic compounds, such as ferrocene or dibenzenechromium, the pi orbitals of the organic moiety are believed to be involved in binding to the metal.

To understand chemical bonding and reactivity in organometallic compounds the isolobal principle should be used. NMR and infrared spectroscopy are common techniques used to determine structure and bonding in this field.

Organometallic compounds undergo several important reactions. They include the following:

Organometallic compounds find practical use in stoichiometric and catalytically active compounds. Tetraethyl lead previously was combined with gasoline as an antiknock agent. Due to the toxicity of lead, it is no longer used, and it has been replaced by other organometallic compounds such as ferrocene and methylcyclopentadienyl manganese tricarbonyl (MMT).

The Monsanto process utilizes a rhodium-carbonyl complex to manufacture acetic acid from methanol and carbon monoxide industrially. The Ziegler-Natta catalyst is a titanium-based organometallic compound used in the production of polyethylene and other polymers.

A wide variety of elements of the periodic table can form organometallic compounds. Examples are given below.

Retrieved from https://www.newworldencyclopedia.org/p/index.php?title=Organometallic_chemistry&oldid=1016871
Categories:
Hidden category:
This page was last edited on 3 January 2019, at 22:13.
Content is available under Creative Commons Attribution/Share-Alike License; additional terms may apply. See Terms of Use for details.