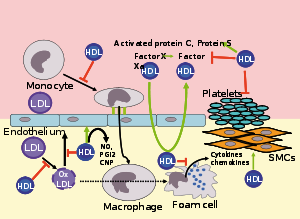 High-density lipoprotein (HDL) is a complex of lipids and proteins that is particularly high in the protein component and that binds with cholesterol and triglycerides and transports them in the circulatory system. The cholesterol bound to HDL also is referred to as good cholesterol because it is thought to have beneficial actions.

There are a number of lifestyle changes that people can make to raise the levels of this "good cholesterol." Among these are aerobic exercise, loss of weight, lowering intake of saturated fats and alcohol, and adding dietary fiber.

Cholesterol plays a central role in many biochemical processes. It is a major constituent in the cell membranes of animals and serves as a precursor of important hormones and other substances. Cholesterol is the principal sterol in all vertebrate cells (McGraw-Hill 2002).

Cholesterol, however, is insoluble in blood and is transported in the circulatory system bound to one of the varieties of lipoprotein. These lipoproteins are spherical particles that have an exterior composed mainly of water-soluble proteins. They bind to lipids like cholesterol and triglycerides and allow them to be transported within the water-based blood stream. High-density lipoproteins (HDLs) are the smallest of the lipoprotein particles. In healthy individuals, about thirty percent of blood cholesterol is carried by HDL (AHA 2008).

HDL are the densest of the lipoprotein particles because they contain the highest proportion of protein. Their most abundant apolipoproteins are apo A-I and apo A-II (BCM).

The liver synthesizes these lipoproteins as complexes of apolipoproteins and phospholipid, which resemble cholesterol-free flattened spherical lipoprotein particles. They are capable of picking up cholesterol, carried internally, from cells by interaction with the ATP Binding Cassette Transporter A1 (ABCA1). A plasma enzyme called lecithin-cholesterol acyltransferase (LCAT) converts the free cholesterol into cholesteryl ester (a more hydrophobic form of cholesterol), which is then sequestered into the core of the lipoprotein particle, eventually making the newly synthesized HDL spherical. They increase in size as they circulate through the bloodstream and incorporate more cholesterol and phospholipid molecules from cells and other lipoproteins, for example by the interaction with the ABCG1 transporter and the phospholipid transport protein (PLTP).

HDLs deliver their cholesterol mostly to the liver or steroidogenic organs such as adrenals, ovary, and testes by direct and indirect pathways. The direct HDL removal pathways involve HDL receptors such as scavenger receptor BI (SR-BI), which mediate the selective uptake of cholesterol from HDL. In humans, the probably most relevant pathway is the indirect one, which is mediated by cholesteryl ester transfer protein (CETP). This protein exchanges triglycerides of VLDL against cholesteryl esters of HDL. As the result, VLDL are processed to LDLs, which are removed from the circulation by the LDL receptor pathway. The triglycerides are not stable in HDL, but degraded by hepatic lipase so that only small HDL particles are left, which restart the uptake of cholesterol from cells.

The cholesterol delivered to the liver is excreted into the bile and hence intestine either directly or indirectly after conversion into bile acids. Delivery of HDL cholesterol to adrenals, ovaries, and testes are important for the synthesis of steroid hormones.

Several steps in the metabolism of HDL can contribute to the transport of cholesterol from lipid laden macrophages of atherosclerotic arteries, termed foam cells to the liver for secretion into the bile. This pathway has been termed reverse cholesterol transport and is considered as the classical protective function of HDL towards atherosclerosis.

However, HDL carries many lipid and protein species, many of which have very low concentrations but are biologically very active. For example, HDL and their protein and lipid constituents help to inhibit oxidation, inflammation, activation of the endothelium, coagulation, or platelet aggregation. All these properties may contribute to the ability of HDL to protect from atherosclerosis, and it is not yet known what is most important.

In the stress response, serum amyloid A, which is one of the acute phase proteins and an apolipoprotein, is under the stimulation of cytokines (IL-1, IL-6) and cortisol produced in the adrenal cortex and carried to the damaged tissue incorporated into HDL particles. At the inflammation site, it attracts and activates leukocytes. In chronic inflammations, its deposition in the tissues manifests itself as amyloidosis.

A link has been shown between level of HDL and onset of dementia. Those with high HDL were less likely to have dementia (Nagourney 2008). Low HDL-C in late-middle age has also been associated with memory loss (Singh-Manoux et al. 2008).

Even people with very low LDL levels are exposed to some increased risk if their HDL levels are not high enough (Barter et al. 2007).

The American Heart Association, NIH and NCEP provides a set of guidelines for male fasting HDL levels and risk for heart disease.

Subfractions (HDL-2C, HDL-3C) can be measured (Hirano et al. 2008) and have clinical significance.

Pharmacological therapy to increase the level of HDL cholesterol includes use of fibrates and niacin. Consumption of pharmacologic doses of niacin can increase HDL levels by 10–30 percent (Medscape 2004), and it is the most powerful agent currently available to increase HDL-cholesterol (Chapman et al. 2004; Roze et al. 2007). A randomized clinical trial demonstrated that such treatments can significantly reduce atherosclerosis progression and cardiovascular events (Drexel 2008). However, niacin products sold as "no-flush," in other words not having side effects such as "niacin flush," do not contain free nicotinic acid and are therefore ineffective at raising HDL, while products sold as "sustained release" may contain free nicotinic acid, but "some brands are hepatotoxic;" therefore the recommended form of niacin for raising HDL is the cheapest, immediate release preparation (Myers et al. 2003).

In contrast, while the use of statins is effective against high levels of LDL cholesterol, it has little or no effect in raising HDL cholesterol (Brewer 2005).

Certain changes in lifestyle can have a positive impact on raising HDL levels (Fogoros 2007):

Retrieved from https://www.newworldencyclopedia.org/p/index.php?title=High_density_lipoprotein&oldid=910847
Categories:
Hidden category:
This page was last edited on 24 January 2009, at 02:13.
Content is available under Creative Commons Attribution/Share-Alike License; additional terms may apply. See Terms of Use for details.