Herrad of Landsberg, also Herrad of Hohenburg (c. 1130 - July 25, 1195), was a twelfth century Alsatian nun and abbess of Hohenburg Abbey in the Vosges mountains of France. She is known as the author and artist of the pictorial encyclopedia Hortus Deliciarum (The Garden of Delights), a remarkable encyclopedic text used by abbesses, nuns, and lay women alike. It brought together both past scholarship and contemporary thought that rivaled the texts used by male monasteries. Many of her ideas have been found to have a modern appreciation.

Life in the abbey

The image of women during medieval times was limited. They were usually depicted either along the lines of the Virgin Mother of Christ or the temptress who seduces men away from God. Wealthy women could expect to be married off for their family's political gain, often dying in childbirth. Sometimes they were married off again if their aged husband died. There were few opportunities available to women for education and study because none were allowed into university.

The abbey became the safe environment where girls were able to receive education, whether as a lay student or toward the taking of vows. Many capable women chose to enter a convent in sacred service to God. There, women were often allowed to study and develop their intellect and artistic abilities in the cloistered environment of the abbey, away from the dangers of the "outside world."

An abbess was often an artist or writer herself, like Herrad of Landsberg and Hildegard of Bingen. Many were also patrons of the creativity of others. An abbess often made sure that the nuns and lay students were trained in the arts of needlework, manuscript illumination, letters, and music, as well as their devotional reading.

In the convent life of the eleventh and twelfth centuries, artists were trained by going through the alphabet, letter by letter. Most work was anonymous, as monastic life encouraged women to remain humble and simply offer their art to God. Despite the emphasis on self-denial, some nuns left little portraits of themselves in their work, or a certain mark to indicate their style. 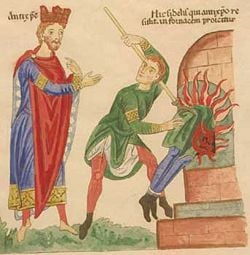 The anti-christ with attributes of a king

In 1147, Frederick Barbarossa appointed Relinda as abbess at the women's monastery of St. Odile at Hohenbourg, near Strausbourg in Alsace, a monastery founded possibly as early as the 600s. She was tasked to institute needed reforms, and Herrad was a nun there at that time. Barbarossa continued to support Relinda after he became emperor in 1155. Under her leadership, the monastery adopted the Augustinian Rule, and in time St. Odile became a rich and powerful monastery, a center of learning, and a school for the daughters of the area nobility.

Herrad of Landsberg was named abbess after Relinda's death in mid 1170. Little is known about Herrad's background or education. However, it is clear the her learning was broad, because she was able to produce an encyclopedic compilation of sources concerning all of salvation history, from creation to the end of the world.

Herrad provided the women under her care with the latest interpretations on the meaning of scripture, using both older theological scholars of the 1100s, such as Anselm and Bernard of Clairvaux, as well as her contemporaries, Peter Lombard and Peter Comestor. Their works formed part of the core curriculum of the new all-male schools, and drew from texts by classical and Arab writers as well. Herrad emphasized texts that reflected the newest thought on theology, biblical history, and canon law. Her book, Hortus Deliciarum (Garden of Delight), is a compendium of all the sciences studied at that time, including theology. 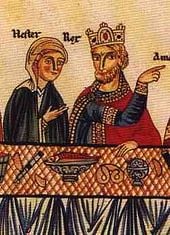 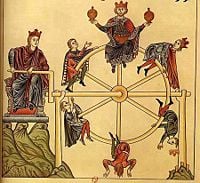 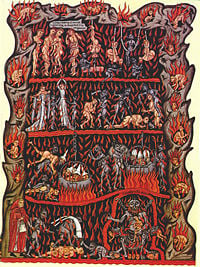 Hortus Deliciarum was begun as early as 1167, and finished in 1185, with some additions continuing until near Herrad's death in 1195. This devotional and encyclopedic teaching manual had both words and pictures to provide an advanced theological education for the learned nuns, and an aid to meditation for the less learned novices and lay students. The book also contained poetry and hymns, some of which were accompanied by musical notations, including early examples of polyphony.[1]

Hortus Deliciarum had 300 parchment leaves of folio size. In addition to the Latin texts it contained 344 illustrations, 130 of them brightly colored, full-page illuminations. Smaller illustrations adorned the pages with text. Drawings and tables were used as well. The book used both Latin and German to aid the younger readers.

Several copyists and artists worked on the book, but Herrad was without question the editor and director of Hortus Deliciarum. The work thus reflects her organization and her integration of text and illustration. Modern literary analysis indicates that probably only seven of the 67 poems were Herrad's. However, through these seven, her voice can be discerned throughout the entire collection.

In terms of its musical significance, Hortus Deliciarum is one of the first sources of polyphony originating from a nunnery. The manuscript contained at least 20 song texts, all of which were originally notated with music. Two songs survive with music intact: Primus parens hominum, a monophonic song, and a two part polyphonic work, Sol oritur occansus.[2]

While not highly original, Hortus Deliciarum shows a wide range of learning. Its chief claim to distinction lies in the illustrations which adorn the text. Many of these are symbolical representations of theological, philosophical, and literary themes. Some are historical, while others represent scenes from the actual experience of the artist. One is a collection of portraits of her sisters in religion. The technique of some of the illustrations has been very much admired and in almost every instance they show an artistic imagination which is rare in Herrad's contemporaries.

Herrad's poetry accompanies various excerpts from the writers of antiquity and pagan authors. It has the characteristic peculiar to the twelfth century: Faults of quantity, words, and constructions not sanctioned by classical usage, and peculiar turns of phrase which would hardly pass muster in a school of Latin poetry at the present time. However, the sentiment is sincere, the lines are musical and admirably adapted to the purpose for which they were intended; namely, the service of God by song. Herrad writes that she considers her community to be a congregation gathered together to serve God by singing the divine praises.

The following is an excerpt from her introduction to Hortus Deliciarum, sent to her religious superior. The bee to which she alludes was the classical symbol of the gathering and organizing of knowledge:

I make it known to your holiness, that, like a little bee inspired by God, I collected from the various flowers of sacred Scripture and philosophic writings this book, which is called the Hortus deliciarum, and I brought it together to the praise and honor of Christ and the church and for the sake of your love as if into a single sweet honeycomb. Therefore, in this very book, you ought diligently to seek pleasing food and to refresh your exhausted soul with its honeyed dewdrops…. And now as I pass dangerously through the various pathways of the sea, I ask that you may redeem me with your fruitful prayers from earthly passions and draw me upwards, together with you, into the affection of your beloved (p. 233).[3]

A song by Herrad

From Herrad's 23-stanza song, "Primus parens hominum" ("Man's first parent"), whose musical notation still exists, describes salvation history, from the creation of humanity and its fall, through the coming of Christ, to the final heavenly Jerusalem. 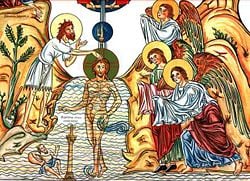 The baptism of Jesus

Man's first parent
As he gazed upon the heavenly light
Was created
Just like the company of angels,
He was to be the consort of angels
And to live forever.
The serpent deceived that wretched man
The apple that he tasted
Was the forbidden one,
And so that serpent conquered him
And immediately, expelled from paradise,
He left those heavenly courts….

God came seeking the sheep
That He had lost,
And he who had given the law
Put himself under it,
So that for those whom he created
He suffered a most horrible death.
Suffering in this way with us,
The omnipotent one
Gave free will,
To avoid hell,
If we scorn vices
And if we do good.
Nothing will harm our soul;
It will come into glory,
And so we ought to love God
And our neighbor.
These twin precepts
Lead to heaven. [stanzas 1-2, 16-19; pp. 245-49]

The fate of the manuscript

After having been preserved for centuries at the Hohenburg Abbey, the manuscript of Hortus Deliciarum passed into the municipal Library of Strasbourg about the time of the French Revolution. There the miniatures were copied in 1818 by Christian Moritz (or Maurice) Engelhardt; the text was copied and published by Straub and Keller, 1879-1899. Thus, although the original perished in the burning of the Library of Strasbourg during the siege of 1870 in the Franco-Prussian War, we can still form an accurate estimate of the artistic and literary value of Herrad's work. 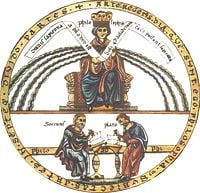 Detail of the seven liberal arts.

Herrad is seen as a pioneer of women. She possessed great artistic ability, thought, and leadership. During her time as abbess, women under her care were allowed to be educated to the best of their abilities. Not only did she leave a remarkable and beautiful historical document for future generations, but she also set a high standard of accomplishment to which other women, both secular and religious, could aspire.

The Hortus Deliciarum was a unique educational tool for women, bringing the old and new theological and scientific thought to the those within the monastery walls, allowing even the youngest novice and lay woman remarkably good education and guidance for meditation and monastic life.

Herrad's sermons can be seen as having contemporary relevance. In one, she deals the paradoxes of human life. She told the nuns to "despise the world, despise nothing; despise thyself, despise despising thyself." In her original manuscript, Herrad, sitting on a tiger skin, is seen as leading an army of "female vices" into battle against an army of "female virtues." This work both fascinated and disturbed medieval commentators.[4]

Herrad's life inspired Penelope Johnson, who highlighted Herrad's contemporary themes in her book, Equal in Monastic Profession: Religious Women in Medieval France. The book was researched from monastic documents from more than two dozen nunneries in northern France in the eleventh to the thirteenth centuries. Johnson opines that the stereotype of passive nuns living in seclusion under monastic rule is misleading. She states: "Collectively they were empowered by their communal privileges and status to think and act without many of the subordinate attitudes of secular women."

Retrieved from https://www.newworldencyclopedia.org/p/index.php?title=Herrad_of_Landsberg&oldid=1064867
Categories:
Hidden category:
This page was last edited on 12 February 2022, at 22:37.
Content is available under Creative Commons Attribution/Share-Alike License; additional terms may apply. See Terms of Use for details.