For other uses, see Paradox (disambiguation). 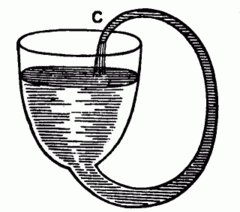 Robert Boyle's self-flowing flask fills itself in this diagram, but perpetual motion machines cannot exist (according to our present understanding of physics).

Sometimes either the statements in question do not really imply the contradiction and the puzzling result is not really a contradiction, or the premises themselves are not all really true, or cannot all be true together. The recognition of ambiguities, equivocations, and unstated assumptions underlying known paradoxes has sometimes led to significant advances in science, philosophy, and mathematics.

The word "paradox" is often used interchangeably and wrongly with "contradiction;" but where a contradiction by definition cannot be true, many paradoxes do allow for resolution, though many remain unresolved or only contentiously resolved, such as Curry's paradox. Still more casually, the term is sometimes used for situations that are merely surprising, albeit in a distinctly "logical" manner, such as the Birthday Paradox. This is also the usage in economics, where a paradox is an unintuitive outcome of economic theory.

The etymology of paradox can be traced back to at least Plato's Parmenides, where Zeno of Elea used the word "paradoxon" to describe some of his seminal philosophic ideas.

It is unknown if incarnations of paradox were used before Zeno of Elea. Later and more frequent usage of the word has been traced to the early Renaissance. Early forms of the word appeared in the late Latin paradoxum and the related Greek παράδοξος paradoxos, which means "contrary to expectation," or "incredible."

All that said, there are some genuine paradoxes, statements that, if true, are false, and if false, are true.

The first known paradoxes were given by the ancient Greek School of philosophy at Elea. Parmenides (c. 515-c.450 B.C.E.) had held that motion is an illusion and that existence is one indivisible whole. His student and follower Zeno (490-430 B.C.E.), regarded by Aristotle as being the founder of dialectic, produced a number of paradoxes that purport to demonstrate that space, time, and especially motion are inherently contradictory, and thus cannot exist; this result was in support of the positions of Parmenides. The Chinese philosopher Hui Shi independently put forward the same paradoxes at about the same time, and the Indian philosopher Nagarjuna took a similar approach somewhat later (Reese, p. 549).

The relativity of time and motion.

They will then reach this position: (Figure 2)

But to move from the situation depicted in Figure 1 to that of Figure 2, B's will have passed twice as many Cs as As. Hence, it would take the Bs twice as long to pass the individual As as the individual Cs. So it seems that double the time is equal to half the time. (Reese, p. 852)

Zeno's paradoxes have fascinated and tormented philosophers, philosophy students, and others to this day because it is seems, intuitively, that there is a mistake in each, but figuring out what the mistake is may be difficult or even impossible, at least for some time. Since each of them, except possibly the one on the relativity of time and motion, really does have a mistake in it, they are only apparent paradoxes and not true ones. But it was not until certain mathematical developments of the nineteenth century that a definitive solution to some of them was found.

The Megarian and Stoic philosophers discovered a number of paradoxes, called insolubilia. One such came from Epimenides, a Cretan, who declared that all Cretans are liars. This is usually known as the liar paradox. It can also be expressed, "The statement I am making to you right now is a lie."

Sometimes supernatural or science fiction themes are held to be impossible due to resultant paradoxial conditions. The theme of time travel has staged many popular paradoxes arising from the traveler interfering with the past. Suppose Jones, who was born in 1950, travels back in time to 1901 and kills his own grandfather. It follows that neither his father nor he himself will be born; but then he would not have existed to travel back in time and kill his own grandfather; but then his grandfather would not have died and Jones himself would have lived; etc. This is known as the Grandfather paradox.

Paradoxes that arise from apparently intelligible uses of language are often of interest to logicians and philosophers. "This sentence is false" is an example of the famous liar paradox: it is a sentence which cannot be consistently interpreted as true or false, because if it is false it must be true, and if it is true it must be false. Therefore, it can be concluded the sentence is both true and false.

Russell's paradox, also known as the Zermelo Paradox (after the German mathematician Ernst Zermelo, 1871-1953), shows that the notion of "the set of all those sets that do not contain themselves" leads to a contradiction. Solving this led to restrictions on the notion of membership in sets, and was instrumental in the development of modern logic and set theory.

Nelson Goodman's problem of the predicates Grue and Bleen and their definability in terms of the predicates Blue and Green with a temporal marker, and vice versa, seems to be a paradox. Goodman and others also presented the Paradoxes of Confirmation, such as showing that the claim "All crows are black" seems to be confirmed by discovering non-black non-crows.

P.F. Strawson produced a purported solution to the liar paradox through his usage of the performative view of truth. Since saying that a sentence is true is the performative act of agreeing with the sentence, it is like saying "ditto." But if there is no original sentence to say "ditto" to, the paradox, Strawson claimed, disappears (Reese, p. 550).

Common themes in paradoxes include direct and indirect self-reference, infinity, circular definitions, and confusion of levels of reasoning. Paradoxes which are not based on a hidden error generally happen at the fringes of context or language, and require extending the context or language to lose their paradox quality.

In moral philosophy, paradox plays a central role in ethics debates. For instance, it may be considered that an ethical admonition to "love thy neighbor" is not just in contrast with, but in contradiction to an armed neighbor actively trying to kill him: If he or she succeeds, he will not be able to love him or her. But to preemptively attack them or restrain them is not usually understood as loving. This might be termed an ethical dilemma. Another example is the conflict between an injunction not to steal and one to care for a family that the subject cannot afford to feed without stolen money.