Albacore (Thunnus alalunga) is one of the eight tuna species belonging to the Thunnus genus. It is the only tuna species that can be marketed as "white meat" in the United States.

This species may also be called albacore fish, albacore tuna, longfin, albies, pigfish, Pacific albacore, German bonito, longfin tuna, longfin tunny, or even just tuna. In some parts of the world, there are other species of tuna, such as the yellowfin tuna (Thunnus albacares) and the blackfin tuna (Thunnus atlantics) that are also called albacore.

Albacore play a vital role in the ecosystem as integral to food chains, consuming anchovies, crustacean zooplankton, and squid, among other prey sought for their individual purpose of survival and development, while serving as prey for larger tunas, sharks, rays, and billfish. They also provide value to human beings, not only commercially and as a popular food source, but also for sport fishing.

The albacore is a highly migratory species, but is most extensive geographically in the pre-adult ages between about two and five years of age, when the fish may conduct trans-oceanic migrations, such as between the eastern and western Pacific Ocean (Laurs and Dotson 1992). Spawning adults above about six years of age has much more limited movements (Laurs and Dotson 1992). Albacore typically achieve sexual maturity at a length of about 90 centimeters (Hwang and Wehrly 2004). They are polygynandrous and spawn as a group by releasing their eggs and sperm into the water (Collette and Nauen 1983).

The albacore is capable of raising its temperature higher than the surrounding water.

Albacore are preyed upon by sharks, rays, larger tunas, and billfishes (Colletee and Nauen 1983).

The U.S. canning industry began in 1903, with an experimental pack of seven hundred cases of albacore (Laurs and Dotson 1992). Almost instantaneously, there was a high demand for canned tuna.

Albacore, which is high in fat, remains one of the best known tunas for canning. It has the lightest flesh and is the only tuna that can be called "white," being white with a hint of pink (Herbst 2001). Two other popular tunas are the yellowfin tunas, which have a slightly stronger flavor than albacore and have pale pink flesh (labeled "light" not "white"), and bluefin tunas, the young of which have a lighter and less strongly flavored flesh than the adult bluefins, whose flesh is dark red (Herbst 2001).

The albacore fishery is economically significant. Methods of fishing include pole and line, long-line fishing, trolling, and some purse seining. Albacore brings a premium price in the can and on the docks (Laurs and Dotson 1992). Albacore is also sought after by sport fishers. 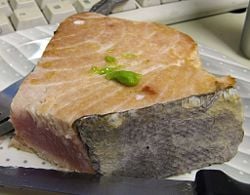 A chunk of semi-cooked albacore

Albacore accumulates higher levels of mercury than all or most other kinds of tuna, due to their high position in the food chain and the subsequent accumulation of heavy metals from their diet. Some groups have urged testing and recall of canned albacore with high mercury levels. In March 2004, the United States Food and Drug Administration (FDA) issued guidelines recommending pregnant women, nursing mothers, and children limit their intake of tuna and other types of predatory fish (USDHHS 2004). They noted, for example, that albacore ("white") tuna has more mercury than canned light tuna. Long-line captured albacore tend to be older fish and have accumulated more mercury than younger, troll-caught albacore.

The World Conservation Union (IUCN) has not re-assessed albacore since 1996, when it was determined to be "data deficient." This is due to lack of fishing for the fish past certain depths (Hwang and Wehrly 2005). Assessments of the stocks of the North and South Atlantic from the same period showed them to be vulnerable and critically endangered stocks respectively, due to significant population reductions measured through an index of abundance and considering "actual or potential levels of exploitation" (Hwang and Wehrly 2005). 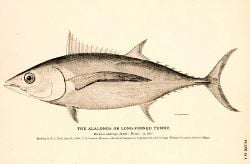 The Marine Stewardship Council advises that albacore from the south Atlantic and south Pacific are fished at sustainable levels, but recommends choosing line (hand-line or pole and line) or troll-caught fish. The Monterey Fish Market Seafood Sustainability Advisory list claims that fishery researchers generally agree that the North Pacific albacore population is a healthy stock at the current time. The list considers the North Pacific albacore fishery to be "eco-friendly," in that there is very little by-catch and no impact on fishery habitat. Also, unlike some other tuna species, albacore do not usually swim with dolphins—and for this reason there is not a dolphin-associated albacore fishery anywhere in the world (MFM 2001).

SeaChoice ranks Albacore as a "best choice" for consumers (SeaChoice 2007). However, it notes also some "moderate concerns" regarding the management effectiveness (in particular, no definitive survey of the albacore stock of the Indian Ocean fishery has taken place), and "moderate concern" over the fishing stock, especially regarding the North Atlantic albacore population, which the National Marine Fisheries Service (NMFS) considers overfished with overfishing still occurring. The southern Atlantic stock is not considered overfished.

In some parts of the world, other species may be called "albacore":