This article is about the electromagnetic phenomenon. 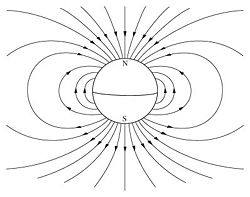 The Earth, with its magnetic field, is approximately a magnetic dipole. However, the "N" and "S" (north and south) poles are labeled geographically, which is the opposite of the convention for labeling the poles of a magnetic dipole moment. 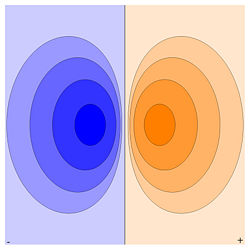 Contour plot of an electrical dipole, with equipotential surfaces indicated.

A magnetic dipole is an object or system in which opposite magnetic poles (north and south) are separated by a distance. A magnetic dipole is produced by a closed circuit of electric current.[1] A simple example of this is a single loop of wire with some constant current flowing through it.[2]

A permanent magnet, such as a bar magnet, owes its magnetism to the intrinsic magnetic dipole moment of the electron. The two ends of a bar magnet are referred to as poles (not to be confused with monopoles), and are labeled "north" and "south." The dipole moment of the bar magnet points from its magnetic south to its magnetic north pole. It should be noted that the "north" and "south" convention for magnetic dipoles is the opposite of that used to describe the Earth's geographic and magnetic poles, so that the Earth's geomagnetic north pole is the south pole of its dipole moment. (This should not be difficult to remember; it simply means that the north pole of a bar magnet is the one that points north if used as a compass.)

The only known mechanisms for the creation of magnetic dipoles are by current loops or quantum-mechanical spin since the existence of magnetic monopoles has never been experimentally demonstrated.

Real-time evolution of the electric field of an oscillating electric dipole. The dipole is located at (60,60) in the graph, oscillating at 1 rad/s (~.16Hz) in the vertical direction.

A physical dipole consists of two equal and opposite point charges: Literally, two poles. Its field at large distances (that is, distances large in comparison to the separation of the poles) depends almost entirely on the dipole moment as defined above. A point (electric) dipole is the limit obtained by letting the separation tend to 0 while keeping the dipole moment fixed. The field of a point dipole has a particularly simple form, and the order-1 term in the multipole expansion is precisely the point dipole field.

Although there are no known magnetic monopoles in nature, there are magnetic dipoles in the form of the quantum-mechanical spin associated with particles such as electrons (although the accurate description of such effects falls outside of classical electromagnetism). A theoretical magnetic point dipole has a magnetic field of the exact same form as the electric field of an electric point dipole. A very small current-carrying loop is approximately a magnetic point dipole; the magnetic dipole moment of such a loop is the product of the current flowing in the loop and the (vector) area of the loop.

Any configuration of charges or currents has a "dipole moment," which describes the dipole whose field is the best approximation, at large distances, to that of the given configuration. This is simply one term in the multipole expansion; when the charge ("monopole moment") is 0—as it always is for the magnetic case, since there are no magnetic monopoles—the dipole term is the dominant one at large distances: its field falls off in proportion to

for the next (quadrupole) term and higher powers of

for the monopole term.

Many molecules have such dipole moments due to non-uniform distributions of positive and negative charges on their various atoms. For example: 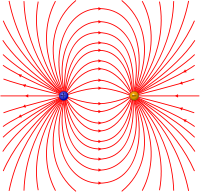 A molecule with a permanent dipole moment is called a polar molecule. A molecule is polarized when it carries an induced dipole. The physical chemist Peter J.W. Debye was the first scientist to study molecular dipoles extensively, and dipole moments are consequently measured in units named debye in his honor.

With respect to molecules there are three types of dipoles:

. This field may, for instance, originate from an ion or polar molecule in the vicinity of

or may be macroscopic (for example, a molecule between the plates of a charged capacitor). The size of the induced dipole is equal to the product of the strength of the external field and the dipole polarizability of

These values can be obtained from measurement of the dielectric constant. When the symmetry of a molecule cancels out a net dipole moment, the value is set at 0. The highest dipole moments are in the range of 10 to 11. From the dipole moment information can be deduced about the molecular geometry of the molecule. For example, the data illustrate that carbon dioxide is a linear molecule but ozone is not.

Field from a magnetic dipole

The far-field strength, B, of a dipole magnetic field is given by

The field itself is a vector quantity:

is the unit vector parallel to r;
m is the (vector) dipole moment;
μ0 is the permeability of free space;

is the three-dimensional delta function. (

The vector potential A of a magnetic dipole is

with the same definitions as above.

Field from an electric dipole

The electrostatic potential at position

due to an electric dipole at the origin is given by:

is a unit vector in the direction of

;
p is the (vector) dipole moment;
ε0 is the permittivity of free space.

where E is the electric field and

is the 3-dimensional delta function. (

= 0 except at r = (0,0,0), so this term is ignored in multipole expansion.) Notice that this is formally identical to the magnetic field of a point magnetic dipole; only a few names have changed.

Torque on a dipole

When placed in an electric or magnetic field, equal but opposite forces arise on each side of the dipole creating a torque τ:

for an electric dipole moment p (in coulomb-meters), or

for a magnetic dipole moment m (in ampere-square meters).

The resulting torque will tend to align the dipole with the applied field, which in the case of an electric dipole, yields a potential energy of

The energy of a magnetic dipole is similarly

Consider a collection of N particles with charges

. For instance, this collection may be a molecule consisting of electrons, all with charge -e, and nuclei with charge

is the atomic number of the i th nucleus. The physical quantity (observable) dipole has the quantum mechanical operator:

A non-degenerate (S-state) atom can have only a zero permanent dipole. This fact follows quantum mechanically from the inversion symmetry of atoms. All 3 components of the dipole operator are antisymmetric under inversion with respect to the nucleus,

is the dipole operator and

is the inversion operator. The permanent dipole moment of an atom in a non-degenerate state (see degenerate energy level) is given as the expectation (average) value of the dipole operator,

is an S-state, non-degenerate, wavefunction, which is symmetric or antisymmetric under inversion:

. Since the product of the wavefunction (in the ket) and its complex conjugate (in the bra) is always symmetric under inversion and its inverse,

it follows that the expectation value changes sign under inversion. We used here the fact that

, being a symmetry operator, is unitary:

and by definition the Hermitian adjoint

may be moved from bra to ket and then becomes

. Since the only quantity that is equal to minus itself is the zero, the expectation value vanishes,

In the case of open-shell atoms with degenerate energy levels, one could define a dipole moment by the aid of the first-order Stark effect. This only gives a non-vanishing dipole (by definition proportional to a non-vanishing first-order Stark shift) if some of the wavefunctions belonging to the degenerate energies have opposite parity; that is, have different behavior under inversion. This is a rare occurrence, but happens for the excited H-atom, where 2s and 2p states are "accidentally" degenerate (see this article for the origin of this degeneracy) and have opposite parity (2s is even and 2p is odd).

In addition to dipoles in electrostatics, it is also common to consider an electric or magnetic dipole that is oscillating in time.

In particular, a harmonically oscillating electric dipole is described by a dipole moment of the form

where ω is the angular frequency. In vacuum, this produces fields:

), the fields approach the limiting form of a radiating spherical wave:

which produces a total time-average radiated power P given by

This power is not distributed isotropically, but is rather concentrated around the directions lying perpendicular to the dipole moment. Usually such equations are described by spherical harmonics, but they look very different. A circular polarized dipole is described as a superposition of two linear dipoles.