Apatite is the name given to a group of phosphate minerals, usually referring to hydroxylapatite (or hydroxyapatite), fluoroapatite (or fluorapatite), and chloroapatite (or chlorapatite). They are named for the presence of hydroxide (OH-), fluoride (F-), and chloride (Cl-) ions, respectively, in the crystal lattice. These three forms of apatite are not readily distinguishable, as each specimen usually contains all three types of ions. Impure, massive apatite is called phosphorite.

Apatite is distributed widely in igneous, metamorphic, and sedimentary rocks, often in the form of cryptocrystalline fragments. It is usually green, but blue, yellow, purple, and brown varieties have also been found. The crystals range from transparent to translucent, with a vitreous to greasy luster.

This mineral is also a biological material. In particular, hydroxylapatite is the main constituent of tooth enamel, and a special form of apatite is found in bone. When toothpastes and water containing fluoride are used, the fluoride ions substitute for hydroxide ions in tooth enamel, making the enamel more resistant to attack by acids.

Apatite has a diverse range of uses. For example, in medicine, hydroxylapatite is used as a filler to replace amputated bone or as a coating to promote the growth of bone into prosthetic implants. Also, some dental implants are coated with hydroxylapatite, in the belief that it may promote integration into bone tissue. Researchers use hydroxylapatite for a chromatographic technique to purify proteins and other chemicals. Geologists have used a radiometric dating technique (known as fission track dating) with natural deposits of apatite to get a sense of historical changes in temperature in mountain-forming belts and sedimentary basins. In some cases, crystals of apatite have been cut and used as gems.

It should be noted that phosphate, arsenate, and vanadate minerals with similar crystalline structures (hexagonal or pseudohexagonal monoclinic crystals) are known as the Apatite Group. This group includes minerals such as apatite, mimetite, pyromorphite, and vanadinite.

The name apatite is derived from a Greek word that means "to deceive," because it appears similar to other minerals, particularly olivine, beryl, and peridot.

Biological: Apatite is one of few minerals that are produced and used by biological systems. Hydroxylapatite is the main component of tooth enamel. A relatively unique form of apatite—in which most OH groups are absent and containing many carbonate and acid phosphate substitutions—is a large component of bone material.

The overall chemical formula for apatite is generally given as Ca5(PO4)3(OH, F, Cl). The formulas for the three common species may be written as:

Apatite has a hardness of 5 on the Mohs scale, and its specific gravity is between 3.1 and 3.2. Its crystals belong to the hexagonal crystal system, and the crystal habit is typically hexagonal prism, terminating with a hexagonal pyramid or pinacoid shape. In addition, apatite may occur in acicular (needle-like), granular, reniform, and massive forms.

A sample of hydroxylapatite.

Hydroxylapatite is the hydroxyl endmember of the apatite group. The OH- ion can be replaced by fluoride, chloride or carbonate. As noted above, its formula may be written as Ca5(PO4)3(OH). The formula may also be written as Ca10(PO4)6(OH)2, to indicate that each crystal unit cell combines two molecules. 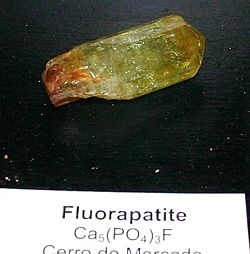 Fluoroapatite is a hard crystalline solid that may be classified as a calcium halophosphate. The pure mineral is colorless, but naturally occurring samples can have various colors, such as green, brown, blue, or violet. It is an important constituent of tooth enamel. It is often combined as a solid solution with hydroxylapatite in biological matrices.

Fluoroapatite can be synthesized in a two-step process. First, calcium phosphate is generated by combining calcium and phosphate salts at neutral pH. This material then reacts further with fluoride sources (such as sodium monofluorophosphate or calcium fluoride (CaF2)) to give the desired material. This reaction is an integral part of the global phosphorous cycle.[13] The reactions may be written as follows:

Fluoroapatite can also be used as a precursor for the production of phosphorus. The mineral can be reduced by carbon in the presence of quartz, ultimately generating white phosphorus (P4), as follows:

transparent green stones are known as asparagus stone,[17] and blue stones may be called moroxite.[18] If crystals of rutile have grown in the apatite crystal, the cut stone displays a cat's eye effect when viewed in the right lighting. Major sources[19] for gem-quality apatite are: Brazil, Burma, and Mexico. Additional sources include Canada, Czechoslovakia, Germany, India, Madagascar, Mozambique, Norway, South Africa, Spain, Sri Lanka, and the United States.