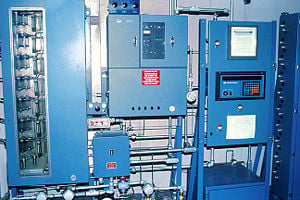 This gas chromatography system records the concentration of a chemical (acrylonitrile) in the air in different parts of a chemical laboratory.

Chromatography (from Greek χρώμα chroma, meaning "color") is the collective term for a family of laboratory techniques for the separation of mixtures. Basically, its a group of different methods used to separate or analyze mixtures. It involves passing a mixture through a stationary phase, which separates the analyte to be measured from other molecules in the mixture and allows it to be isolated.

The main use of chromatography is to purify a certain material from a mixture. It is so precise that it can be used either to separate proteins that only vary by one amino acid as well as to purify volatile or soluble material.

Different types of Chormatography and some uses are:

Chromatography means "to show with colors." It was the Russian botanist Mikhail Semyonovich Tsvet (1872-1919) who invented the first chromatography technique in 1900, during his research on chlorophyll. He used a liquid-adsorption column containing calcium carbonate to separate plant pigments. The method was described on December 30, 1901, at the 11th Congress of Naturalists and Doctors (XI съезд естествоиспытателей и врачей) in St. Petersburg. The first printed description was in 1903, in the Proceedings of the Warsaw Society of Naturalists, section of biology. He first used the term "chromatography" in print in 1906, in his two papers about chlorophyll in the German botanical journal, Berichte der Deutschen Botanischen Gesellschaft. In 1907, he demonstrated his chromatograph for the German Botanical Society. Interestingly, Mikhail's surname "Tsvet" means "color" in Russian, so some have suggested that he named the procedure chromatography (literally "color writing") to ensure that he, a commoner in Tsarist Russia, would be remembered for his work.

In 1952, Archer John Porter Martin and Richard Laurence Millington Synge were awarded the Nobel Prize in Chemistry for their invention of partition chromatography.[1] Since then, the technology has advanced rapidly. Researchers found that the principles underlying Tsvet's chromatography could be applied in many different ways, giving rise to the different varieties of chromatography described below. Simultaneously, advances continually improved the technical performance of chromatography, allowing the separation of increasingly similar molecules. 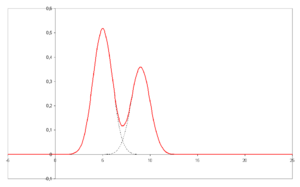 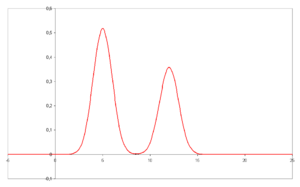 Plotted on the x-axis is the retention time and plotted on the y-axis a signal (for example obtained by UV spectroscopy) corresponding to the amount of analyte exiting the system.

Chromatography is a separation method that defines the differences in partitioning behavior between a mobile phase and a stationary phase to separate the components in a mixture. Components of a mixture may be interacting with the stationary phase based on charge, relative solubility or adsorption. There are two theories of chromatography, the plate and rate theories.

The retention of a compound often differs considerably between experiments and laboratories due to variations of the eluent, the stationary phase, temperature, and the setup. It is therefore important to compare the retention of the test compound to that of one or more standard compounds under absolutely identical conditions.

During the chromatographic process the analyte experiences zone broadening as a result of diffusion. Two analytes with different retention times yet with large broadening do not resolve and this is why in any chromatographic system broadening needs to be minimized. This is done by selecting the proper stationary and mobile phase, the eluent velocity, the track length and temperature. The Van Deemter's equation gives an ideal eluent velocity taking into account several physical parameters.

The plate theory of chromatography was developed by Archer John Porter Martin and Richard Laurence Millington Synge. They stated that each plate should be a broken into a specific length, and the solute spends a finite (limited) amount of time in each place. The size of the cell is there equilibriate between the two phases. The smaller the plate, the faster the equilibrium and the more plate in the column. This is further related to column efficiency.

The plate theory describes the chromatography system, the mobile and stationary phases, as being in equilibrium. The partition coefficient K is based on this equilibrium, and is defined by the following equation:

K is assumed to be independent of concentration, and can change if experimental conditions are changed, for example temperature is increased or decreased. As K increases, it takes longer for solutes to separate. For a column of fixed length and flow, the retention time

can be measured and used to calculate K.

Thin layer chromatography is used to separate components of chlorophyll

This old technique is used to analyze complex mixtures, such as ink, by separating the different chemicals it was made from. The method involves placing a small spot of sample solution onto a strip of chromatography paper. The paper is placed into a jar containing a shallow layer of solvent and sealed. As the solvent rises through the paper it meets the sample mixture which starts to travel up the paper with the solvent. Different compounds in the sample mixture travel different distances according to how strongly they interact with the paper. Mixtures of different characteristics (size and solubility) travel at different speeds. This allows the calculation of an Rf value and can be compared to standard compounds to aid in the identification of an unknown substance.

Thin layer chromatography (TLC) is a widely-employed laboratory technique and is similar to paper chromatography. However, instead of using a stationary phase of paper, it involves a stationary phase of a thin layer of adsorbent like silica gel, alumina, or cellulose on a flat, inert substrate. Compared to paper, it has the advantage of faster runs, better separations, and the choice between different adsorbents. Different compounds in the sample mixture travel different distances according to how strongly they interact with the adsorbent. This allows the calculation of an Rf value and can be compared to standard compounds to aid in the identification of an unknown substance.

Column chromatography encompasses a number of techniques based around utilizing a vertical glass column filled with some form of solid adsorbent, with the sample to be separated placed on top of this support. The top is then filled with a liquid, which flows down through the column. Similarly to other forms of chromatography, differences in rates of movement through the solid medium are translated to different exit times from the bottom of the column for the various elements of the original sample. If the solvent moves down by gravity, it is gravity column chromatography. If the solvent moves down by air pressure, it is known as flash chromatography.

In 1978, W.C. Still introduced a modified version of column chromatography called flash column chromatography (flash).[2] The technique is very similar to the traditional column chromatography, except that the solvent is driven through the column by applying positive pressure. This method is used solely in organic teaching labs because of its ease and environmentally friendly nature. This allowed most separations to be performed in less than 20 minutes, with improved separations compared to the old method. Modern flash chromatography systems are sold as pre-packed plastic cartridges, and the solvent is pumped through the cartridge. Systems may also be linked with detectors and fraction collectors providing automation. The introduction of gradient pumps resulted in quicker separations and less solvent usage.

FPLC involves using a pump and column which withstand high pressure so separations are quickly induced.

High performance liquid chromatography (HPLC) is a form of column chromatography used frequently in biochemistry and analytical chemistry. The analyte is forced through a column (stationary phase) by a liquid (mobile phase) at high pressure, which decreases the time the separated components remain on the stationary phase and thus the time they have to diffuse within the column.

Specific techniques which come under this broad heading are listed below. It should also be noted that the following techniques can also be considered fast protein liquid chromatography if no pressure is used to drive the mobile phase through the stationary phase. It is not dissimilar from Aqueous Normal Phase Chromatography.

Affinity chromatography is based on selective non-covalent interaction between an analyte and specific molecules. Its set to separate all molecules of a specificity from the whole-lot of molecules of a mixture. It is often used in biochemistry in the purification of proteins bound to tags. These fusion proteins are labeled with compounds such as His-tags, biotin, or antigens, which bind to the stationary phase specifically. After purification, some of these tags are usually removed and the pure protein is obtained.

Gas chromatography (GC) is based on a partition equilibrium of analyte between a solid stationary phase and a mobile gas. It involves a vaporised sample being injected onto the chromatography column head. The stationary phase is adhered to the inside of a small-diameter glass tube (a capillary column) or a solid matrix inside a larger metal tube (a packed column). It is widely used in analytical chemistry; though the high temperatures used in GC make it unsuitable for high molecular weight biopolymers, frequently encountered in biochemistry, it is well suited for use in the petrochemical, environmental monitoring, and industrial chemical fields. It is also used extensively in chemistry research.

Countercurrent chromatography (CCC) is a type of liquid-liquid chromatography, where both the stationary and liquid phases are liquids. It involves mixing a solution of liquids, allowing them to settle into layers, and then separating the layers. The liquid is passed through coil columns synchronized by coil planet centrifuge. The coiled force keeps the stationary phase against the continuous mobile phase.

Retrieved from https://www.newworldencyclopedia.org/p/index.php?title=Chromatography&oldid=1095487
Categories:
Hidden category:
This page was last edited on 14 January 2023, at 00:18.
Content is available under Creative Commons Attribution/Share-Alike License; additional terms may apply. See Terms of Use for details.