Silica gel is a granular, porous form of silica, produced synthetically from sodium silicate. Despite the name, silica gel is a solid. It readily adsorbs water, making it extremely useful as a desiccant (drying agent) that controls local humidity. It is most commonly encountered in everyday life as beads packed in a semi-permeable plastic. As a desiccant, it is used to prevent the spoilage of foods, to protect electronic components from moisture, and to dry the air in compressed air systems. Chemists use it in the technique known as chromatography, for the separation of various chemicals.

Given that silica gel strongly adsorbs moisture and may contain poisonous additives (such as color indicators, fungicides, or pesticides), packets of silica gel usually bear warnings for the user not to eat the contents but to throw the packets away. The food-grade desiccant, however, should not include any poisons that could cause long-term harm if consumed in the quantities normally included with the items of food.

Silica gel was patented by chemistry professor Walter A. Patrick at Johns Hopkins University, Baltimore, Maryland in 1919. Prior to that, it was used in World War I for the absorption of vapors and gases in gas mask canisters. The substance was known to exist as early as the 1640s as a scientific curiosity.[1]

In World War II, silica gel was indispensable in the war effort for keeping penicillin dry, protecting military equipment from moisture damage, as a fluid cracking catalyst for the production of high octane gasoline, and as a catalyst support for the manufacture of butadiene from ethanol, feedstock for the synthetic rubber program. 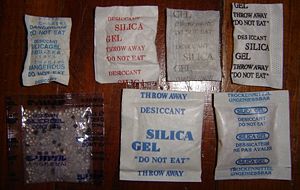 Some examples of silica gel sachets.

Silica gel's high surface area (around 800 m²/g) allows it to adsorb water readily, making it useful as a desiccant. Once saturated with water, the gel can be regenerated by heating to 150 °C (300 °F) for 1.5 hours per liter of gel. Some types of silica gel will "pop" when exposed to enough water.

In many items, from leather to pepperoni, moisture encourages the growth of mold and spoilage. Condensation may also damage other items like electronics and may speed the decomposition of chemicals, such as those in vitamin pills. By adding sachets of silica gel, these items can be preserved longer.

Silica gel may also be used to keep the relative humidity inside a high-frequency radio or satellite transmission system waveguide as low as possible. Excessive moisture buildup within a waveguide can cause arcing inside the waveguide itself, damaging the power amplifier feeding it. Also, beads of water that form and condense inside the waveguide change the characteristic impedance and frequency, impeding the signal. It is common for a small compressed air system (similar to a small home aquarium pump) to be employed to circulate the air inside the waveguide over a jar of silica gel.

Silica gel is also used to dry the air in industrial compressed air systems. Air from the compressor discharge flows through a bed of silica gel beads. The silica gel adsorbs moisture from the air, preventing damage to the system caused by condensation or moisture. A similar setup is used to dry the compressed air for brake systems on railway locomotives, where condensation and ice in the brake air pipes could lead to brake failure.

Silica gel is sometimes used as a preservation tool to control relative humidity in museum and library exhibitions and storage.

In some cases, chelating groups have been covalently bound to silica gel. These materials have the ability to remove metal ions selectively from aqueous media. Chelating groups can be covalently bound to polyamines, which in turn have been grafted onto a silica gel surface, producing a material of greater mechanical integrity. Silica gel may also be combined with alkali metals to form a reducing agent.

Silica gel is also used as cat litter, by itself or in combination with more traditional materials, such as clays including bentonite. It is trackless and virtually odorless, but expensive.

By itself, silica gel is nontoxic, nonflammable, and chemically unreactive. However, some of the beads may be doped with a moisture indicator, such as cobalt (II) chloride, which is toxic and may be carcinogenic. Cobalt (II) chloride is deep blue when dry (anhydrous) and pink when moist (hydrated). This is one reason most silica gel packets are labeled as dangerous or poisonous when eaten.

Crystalline silica dust can cause silicosis, but synthetic amorphous silica, which is what silica gel is, does not cause silicosis. A chemically similar substance with far greater porosity is aerogel.