Crappie (plural: Crappie or crappies) is the common name for either of two species of North American freshwater fish comprising the genus Pomoxis of the sunfish family (family Centrarchidae), the white crappie (Pomoxis annularis) and the black crappie (P. nigromaculatus). These also have many other common names, with the P. annularis known as the calico bass and P. nigromaculatus known variously as calico bass, grass bass, oswego bass, speckled bass, and strawberry bass.

These functions reflect the principle of bi-level functionality, whereby the Pomoxis species not only advance their own individual function (reproduction, survival), but also provide a larger function for the ecosystem and for humans.

Pomoxis is one of eight genera in Centrarchidae. Among other well-known members of the family are the bluegill (Lepomis macrochirus) and pumpkinseed (Lepomis gibbosus), as well as the basses (genus Micropterus, although members of other genera also include representatives with the common name of bass).

Both species of crappie as adults feed predominantly on smaller species, including the young of their own predators, which include the northern pike, muskellunge, bass, and walleye. They have diverse diets, however, including zooplankton, insects, and crustaceans (Frose and Ortañez 2008a, 2008b; Adams 2000).

By day, crappie tend to be less active and to concentrate around weed beds or submerged objects, such as logs and boulders; they feed especially at dawn and dusk, moving then into open water or approaching the shore (Adams 2000; Nature Serve 2008a, 2008b).

Because of their diverse diets, crappie may be caught in many ways, including casting light jigs, trolling with minnows or artificial lures, using small spinnerbaits, or using bobbers. Crappies are also popular with ice-fishers, as they are active in winter (Adams 2000; Nature Serve 2008a, 2008b; Bridges).

The genus name Pomoxis derives from the Greek πώμα (cover, plug, operculum) and οξύς (sharp). The common name (also spelled croppie or crappé), derives from the Canadian French crapet, which refers to many different fishes of the family Centrarchidae. Both "crappie" and "crappies" are acceptable as the plural, although in some cases the term crappies tends not to be used, by analogy with fishes, except to refer to types of crappie. 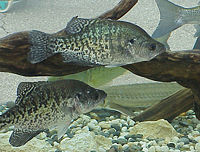 The white crappie (Pomoxis annularis Rafinesque, 1818) is native throughout the eastern half of Canada and the United States, and has been widely introduced in the west as well.

The dorsal fin of the white crappie has six spines. The maximum recorded length for a white crappie is 53.0 centimeters (21 inches), with a maximum weight of almost 2.35 kilograms (more than 5.18 pounds); it can live as long as ten years (Frose and Ortañez 2008a).

These species prefers slower-moving water, often turbid, whether a backwater of a small creek or a large lake.

When spawning, the white crappie deposits its eggs on plant surfaces (Frose and Ortañez 2008a) or in poorly-defined nests in shallow water (Nature Serve 2008a).

This very prolific fish may overpopulate small bodies of water under 40 hectares (100 acres) in area. 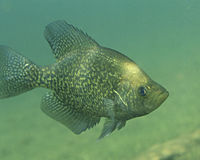 The black crappie (Pomoxis nigromaculatus Lesueur, 1829) is very similar to P. annularis in size, shape, and habits, except that it is darker, with a pattern of black spots. It is most accurately identified by the seven or eight spines on its dorsal fin. The oldest recorded age of a specimen is fifteen years, although seven years is a more typical life span for the species (Adams 2000; Frose and Ortañez 2008b).

The black crappie's range is uncertain, since it has been so widely transplanted, but it is presumed to be similar to the white crappie's; as of 2005, populations existed in all of the lower 48 states (Frose and Ortañez 2008b; TPWD 2008).

Like P. annularis, P. nigromaculatus is very prolific and can tend to overpopulate its environment, with negative consequences both for the crappie and for other fish species (Adams 2000).

Angling for crappie is popular throughout much of North America. Methods vary, but among the most popular is called "spider rigging," a method characterized by a fisherman in a boat with many long fishing rods pointing away from the angler at various angles like spokes from a wheel (Neporadny 2008). Anglers who employ the spider rigging method may choose from among many popular baits. Some of the most popular are plastic jigs with lead jig heads, crankbaits, or live minnows.

Many anglers also chum or dump live bait into the water to attract the fish hoping the fish will bite their bait. Crappie are also regularly targeted and caught during the spawning period by fly fishermen, and can be taken from frozen ponds and lakes in winter by ice fishing.

Retrieved from https://www.newworldencyclopedia.org/p/index.php?title=Crappie&oldid=1067003
Categories:
Hidden category:
This page was last edited on 7 April 2022, at 01:11.
Content is available under Creative Commons Attribution/Share-Alike License; additional terms may apply. See Terms of Use for details.