Sunfish is the common name for the freshwater, ray-finned fish comprising the North American family Centrarchidae of the Perciformes order (perch-like fish), characterized by a laterally compressed body and dorsal fins typically with five to 13 spines. This family includes such familiar species as the black basses, rock bass, largemouth bass, bluegill, and crappies.

Some other fish, both marine and freshwater, also have the common name sunfish. These include the marine family Molidae, which are sometimes known as "marine sunfishes," and such saltwater fish as the "ocean sunfish" (Mola mola), "oblong sunfish" (Ranzania laevis) and the "moonfish, "sunfish" or "opah" comprising the small family Lampridae of two species. Another group of freshwater fish sometimes known as sunfish that are not part of the Centrarchidae family includes the "pygmy sunfish," which comprise the genus Elassoma of family Elassomatidae. This article will be focused on the members of Centrarchidae.

In the United States, sunfish are a well-known fish. While some are valued as a food source, most sunfish are valued particularly for sports fishing, and have been introduced in many areas outside their original ranges. Popular game fish include Micropterus salmoides (largemouth bass), and M. dolomieu (smallmouth bass). The interesting colors, color patterns, and shapes of sunfish also add to the wonder of nature. As such, they provide more than nutritional value, but also touching upon the inner nature of people to seek beauty and the challenge of attracting and catching a game fish.

Sunfish (or centrarchids) are typically nest builders, where the male hollows out a small depression with his tail, the female lays the eggs, and then the male guards the eggs (Nelson 1994).

Sunfish are native only to North America and are only freshwater fish. Sizes of most are in the 20 to 30 centimeter (eight to twelve inch) range, but with the largemouth bass reported to reach almost one meter (just over three feet) in extreme cases. The world record largemouth bass was caught near Jacksonville, Georgia on June 2, 1932 by George Perry. It weighed 22 pounds four ounces and was caught from an oxbow lake off the Ocmulgee River called Montgomery Lake. This is one of the most sought-after records in the fishing world.

The type genus for the family is Centrarchus (consisting solely of the flier, C. macropterus). Nelson (1994) recognizes eight genera and 29 species in Centrarchidae.

The Centrarchidae as a group are known as the sunfishes, but there are species designated as basses, bluegills, pumpkinseed, and crappies, and so forth. 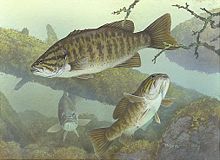 The members of the genus Micropterus typically are known as the basses (Nelson 1994), although five other genera also include representatives with the common name of bass (Agbayani 2006): Ambloplites (A. ariommus or shadow bass, A. cavifrons or roanoke bass, A. constellatus or ozark bass, and A. rupestris or rock bass); Centrarchus (C. macropterus or bass pawik); Lepomis (L. gibbosus or sun bass); Enneacanthus (E. chaetodon or bassek tarczowy, and E. gloriosus or bassek diamentowy), and Pomoxis (P. annularis or calico bass, and P. nigromaculatus, known variously as calico bass, grass bass, oswego bass, speckled bass, and strawberry bass, as well as black crappie).

The crappies commonly comprise the genus Pomoxis, while the genus Lepomis includes the bluegill (Lepomis macrochirus) and pumpkinseed (Lepomis gibbosus). Members of the Enneacanthus genus are commonly known as the banded or little sunfishes, including the well known species, E. obesus, the banded sunfish and E. chaetodon, the black-banded sunfish. 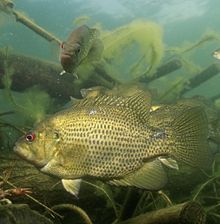