A colubrid is any of the numerous, diverse, largely nonvenomous snakes that comprise the reptile family Colubridae, characterized by highly flexible jaws, a body almost completely covered in scales, generally relatively wide ventral scales and a standard complement of enlarged scales on the head, the lack of any vestiges of the hind limbs, the absence of the coronoid bones of the lower jaws, and commonly the presence of Duvernoy's glands on either side of the head behind the eye. There are about 1700 species in 300 genera in Colubridae. Among well-known colubrids are king snakes, watersnakes, milk snakes, gartersnakes, racers, ratsnakes, ring-necked snakes, hog-nosed snakes, and the venomous boomslangs.

Colubridae is a very broad assemblage of snakes that includes about seventy percent of all snake species on earth and classically has been a place for various snakes that do not fit anywhere else. For such reasons, generalizations are difficult to apply. Colubrids include members that are aquatic, terrestrial, fossorial (living underground), and arboreal (spending large amounts of time in trees or bushes). Colubrid species are found in the wild worldwide with the exception of Antarctica, central and western Australia, and high latitudes of North America and Eurasia.

In addition to advancing their own individual functions (reproduction, survival), colubrids as a group provide important function for the ecosystem and for humans. (See bi-level functionality.) Ecologically, they help in the control of prey populations, such as mice, rats, lizards, frogs, and so forth. Likewise, they also serve as food for various animals, such as birds of prey, crocodiles, mammals, and so forth. For humans, many species, such as the cornsnakes and kingsnakes, are popular in the pet trade, and snakes also are used to make leather, such as the Asian ratsnakes. They also provide food for humans and for farm-raised crocodiles.

A number of colubrid species are classified as Critically Endangered, Endangered, Vulnerable, and Threatened. On the other hand, introduced snakes have cause problems for native fauna, such as the brown treesnake in Guam, which has decimated lizards and birds. 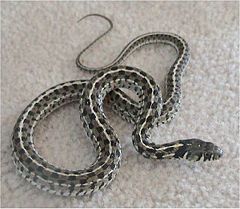 A colubrid's body is almost completely covered in scales. They have highly flexible jaws, allowing them to consume large prey items, and have no remnant of a pelvic girdle (Bauer 1998). The coronoid bones of the lower jaws also have been lost (Savitzky 2004).

Colubrids typically have fewer rows of dorsal scales and relatively wider ventral scales than the boas and pythons. They generally have a standard complement of enlarged scales on the head, including having nine scales on the top of the head.

However, such traits as the above, are not exclusive to the colubrids, but are found in members of other taxonomic groups, such as the Elapidae and Atractaspididae and some of the Viperidae, and are not found in all members of Colubridae (Savitzky 2004).

Most colubrids are distinguished by the presence of a unique organ, Duvernoy's glands, which are a pair of organs found behind the eye on either side of the head. They are not really modified salivary glands as sometimes described, having a different origin and tissue characteristics, but are associated with the rear teeth of the maxillary bones. Again, the Duvernoy's glands are not a universal feature of colubrids.

Homologous to the venom glands of vipers, elapids,and Atractaspis, the Duvernoy's glands secrete a complex mix of chemicals, which may act as a slow-acting venom or digestive aid, and is some species is delivered by enlarged and/or grooved rear pair of maxillary teeth (Savitzky 2004). The venom-injecting fangs of colubrids are termed opisthoglyphous, meaning that the small, grooved fangs are located in the back of the upper jaw, unlike those of vipers and elapids, which are located in the front. Even non-venomous colubrids often have fangs in this position, and use them to puncture egg-shells or similar food (Bauer 1998).

Unlike the vipers and elapids, the venom of colubrids generally has little or no impact on human beings (Savitzky 2004). Nonetheless, there are a few groups of colubrids, such as genus Boiga, that can produce medically significant bites, while the boomslang and the twigsnakes have caused human fatalities.

The name comes from the Latin coluber for "snake." 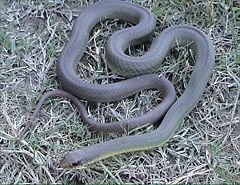 Colubrid species are found on every continent, except Antarctica (Bauer 1998). They also are not found in central and western Australia nor very high latitudes of Eurasia and North America, but otherwise have a worldwide distribution. Unlike most continents, in Australia colubrids are a minority of snake species, with the snake fauna dominated by the elapids (Savitzky 2004).

As a diverse assemblage of snakes, colubrids feed on a wide range of prey. Some are generalists, feeding on what they can capture and eat, and others specialize in certain prey. Coluber constrictor (racer) feeds on a wide variety, including mammals, lizards, baby turtles, insects, and frogs. Specialist snakes prefer a particular class of prey, such as frogs, fishes, or mammals (few specialize on insects) or limit themselves further to lizard eggs, skinks, and so forth. Members of the genus Stenorrhina primarily prey upon scorpions, tarantulas, and grasshoppers, while the rainbow snake (Farancia erytrogramma) feeds primarily on eels (Savitzky 2004).

About seventy percent of all snake species are placed in Colubridae (Savitzky 2004). The relationships among the colubrid genera are poorly understood and very controversial (Savitzky 2004). The colubrids are certainly not a natural group, as many are more closely related to other groups, such as elapids, than to each other. This family has classically been a dumping ground for snakes that do not fit anywhere else.

Colubrid fossils appear as early as the Lower Oligocene, about 35 million years ago, but most diversity came during the Miocene about 5 to 25 million years ago, as colubrids, elapids, and viperids began to dominate the landscape from the previously dominating boa-like species (Savitzky 2004).

Retrieved from https://www.newworldencyclopedia.org/p/index.php?title=Colubrid&oldid=1033902
Categories:
Hidden category:
This page was last edited on 17 March 2020, at 21:48.
Content is available under Creative Commons Attribution/Share-Alike License; additional terms may apply. See Terms of Use for details.