Pheasant is the common name for various long-tailed birds of the family Phasianidae (order Galliformes), a group that also includes the smaller partridges and even smaller quails. Pheasants are characterized by strong sexual dimorphism, with males of most species having highly colored plumage, long tails, and wattles (fleshy growth hanging from the neck or throat). The term pheasant also is used in certain locales for similar birds, such as the closely related ruffed grouse and some species of partridge.

The term pheasant refers to those birds mainly belonging to the Phasianinae subfamily, which includes 16 genera, with genus Phasianus sometimes referred to as the 'true pheasants." Five of the genera typically utilize common names other than "pheasant": Afropavo (Congo peafowl), Pavo (peafowl), Gallus (junglefowl), Lophophorus (monals), and Tragopan (tragopans). Some of these also use the term pheasant, such as Lophophorus impejanus, which is variously known as the Himalayan monal, the impeyan monal, and the impeyan pheasant. The best-known of the pheasants is the common pheasant (Phasianus colchicus), which is widespread throughout the world in introduced feral populations and in farm operations. Various other pheasant species are popular in aviaries, such as the golden pheasant (Chrysolophus pictus). Pheasants are originally Old World birds, native to Asia, but are now found in Europe and have been introduced to North America.

Pheasants provide numerous ecological, commercial, aesthetic, sport, and nutritional values. They are important to various food chains, consuming grains, berries, and other vegetation and being consumed by foxes and other animals. In many countries, pheasant species are hunted as game, and have been commercially raised for this purpose as well as food. Nutritionally, they are a rich source of iron, protein, niacin, and other nutrients. And aesthetically, the colorful plumage of male pheasants and the unique courtship behaviors add to the human wonder of nature.

Several species are threatened by hunting and other human activities such as illegal logging and habitat loss.

The pheasant family, Phasianidae, consists of the pheasants and their allies, including quail, partridges, junglefowl, and peafowl). These are terrestrial species, variable in size but generally plump, with broad relatively short wings. Many have a spur on their legs. Males of the larger species often are brightly colored. The typical diet consists of seeds with some insects and berries.

The pheasants generally are considered birds belonging to the following genera in Phasianidae: Argusianus, Catreus, Chrysolophus, Crossoptilon, Ithaginis, Lophura, Phasianus, Polyplectron, Syrmaticus, Pucrasia, and Rheinartia. The remaining five genera in the subfamily Phasianinae are Afropavo (Congo peafowl), Pavo (peafowl), Gallus (junglefowl), Lophophorus (monals), and Tragopan (tragopans) (ITIS 2005a). Collectively, these 16 genera comprise the Phasianinae subfamily, which sometimes is considered to be the pheasant subfamily, with all members considered pheasants (ITIS 2005a).

Pheasants are characterized by wattled heads and long tails. There is a lack of feathers on the feet and lower legs. Males are usually larger than the females, and have longer tails. The males also tend to have brightly colored plumage, while the females are inconspicuously, protectively colored. Males practice elaborate courtship displays and may fight to death for the right to mate. Males play no part in rearing the young. 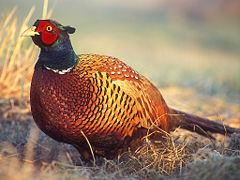 The common pheasant (Phasianus colchicus), otherwise known as the ring-necked pheasant or Chinese pheasant is a game bird in the pheasant family Phasianidae. They are native to Asia but have been widely introduced elsewhere, often as a game bird. The specific epithet, colchicus, refers to Colchis, a region in the Caucasus.

The adult pheasant is 50-90 centimeters (cm) in length with a long tail, often accounting for half the total length. The male (cock or rooster) has barred bright brown plumage and green, purple, and white markings, often including a white ring around the neck, and the head is green with distinctive red patches. This bird is also called the English Pheasant, or just Pheasant. The males are polygynous and are often accompanied by a harem of several females.

The nominate race P. c. colchicus lacks a white neck ring. This is, however, shown by the race ring-necked pheasant, P. c. torquatus, which after several failed attempts was successfully introduced to the United States in 1881. The sub-species epithet torquatus means "collared.

The female (hen) is much less showy, with a duller mottled brown plumage all over, similar to that of the partridge. The birds are found on wooded land and scrub. They feed on the ground on grain, leaves, and invertebrates, but roost in trees at night. They nest on the ground, producing a clutch of around ten eggs over a two-three week period in April to June. The incubation period is about 23-26 days. The chicks stay near the hen for several weeks after hatching but grow quickly, resembling adults by only 15 weeks of age.

While pheasants are able short-distance fliers, they prefer to run: but if startled they can suddenly burst upwards at great speed, with a distinctive "whirring" wing sound. Their flight speed is only 27 to 38 mph when cruising but when chased they can fly up to 60 mph.

They are bred to be hunted and are shot in great numbers in Europe. The doggerel "up flies a guinea, bang goes sixpence, and down comes half-a-crown" reflects that they are often shot for sport rather than as food. If eaten, the meat is somewhat tough and dry, so the carcasses were often hung for a time to "cure" in order to improve the meat by slight decomposition, as with most other game. Modern cookery generally uses moist roasting or farm-raised female birds.

The bird was brought to Britain around the tenth century but became locally extinct in the early seventeenth century; it was reintroduced in the 1830s and is now widespread. Repeated reintroduction has made the pheasant a very variable species in regard to size and plumage. 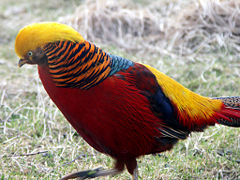 The golden pheasant or Chinese pheasant, (Chrysolophus pictus) is a game bird of the family Phasianidae. It is native to forests in mountainous areas of western China, but feral populations have been established in the United Kingdom and elsewhere.

The adult male is 90-105 cm in length, its tail accounting for two-thirds of the total length. It is unmistakable with its golden crest and rump and bright red body. The deep orange "cape" can be spread in display, appearing as an alternating black and orange fan that covers all of the face except its bright yellow eye, with a pinpoint black pupil.

Males have a golden-yellow crest with a hint of red at the tip. The face, throat, chin, and the sides of neck are rusty tan. The wattles and orbital skin are both yellow in color, and the ruff or cape is light orange. The upper back is green and the rest of the back and rump are golden-yellow in color. The tertiaries are blue, whereas the scapulars are dark red. Another characteristic of the male plumage is the central tail feathers, which are black spotted with cinnamon as well as the tip of the tail being a cinnamon buff. The upper tail coverts are the same color as the central tail feathers. Males also have a scarlet breast, and scarlet and light chestnut flanks and underparts.

The female (hen) is much less showy, with a duller mottled brown plumage, similar to that of the female common pheasant. She is darker and more slender than the hen of that species, with a proportionately longer tail (half her 60-80 cm length). The female's breast and sides are barred buff and blackish brown, and the abdomen is plain buff. She has a buff face and throat. Some abnormal females may later in their lifetime get some male plumage.

Both males and females have yellow legs and yellow bills.

Despite the male's showy appearance, these hardy birds are very difficult to see in their natural habitat, which is dense, dark young conifer forests with sparse undergrowth. Consequently, little is known of their behavior in the wild.

They feed on the ground on grain, leaves, and invertebrates, but roost in trees at night. While they can fly, they prefer to run: but if startled they can suddenly burst upwards at great speed, with a distinctive wing sound. Although they can fly in short bursts they are quite clumsy in flight and spend most of their time on the ground.

Golden pheasants lay 8-12 eggs at a time and will then incubate these for around 22-23 days. They tend to eat berries, grubs, seeds, and other types of vegetation.

The male has a metallic call in the breeding season.

The golden pheasant is commonly found in zoos and aviaries, but often as impure specimens that have the similar Lady Amherst's pheasant in their lineage. There are also different mutations of the golden pheasant, including red, yellow, and snowflake.

This list is ordered to show assumed relationships between species. Only the 11 main genera known as pheasants are included. The remaining five genera in Phasianinae—Afropavo (Congo peafowl), Pavo (peafowl), Gallus (junglefowl), Lophophorus (monals), and Tragopan—are not included in this particular taxonomy. 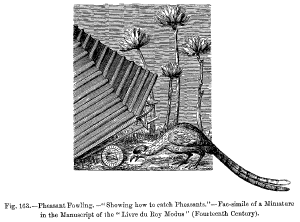 Pheasant Fowling.—"Showing how to catch Pheasants."—Fac-simile of a Miniature in the Manuscript of the "Livre du Roy Modus" (Fourteenth Century).