Grouse (plural: grouse or grouses) is the common term for any members of the about 20 species of plump, chickenlike, terrestrial birds comprising the family Tetraonidae of the order Galliformes. Grouse inhabit temperate and subarctic regions of the northern hemisphere. They are game birds, which are hunted for sport and food. The common names of prairie-chickens, ptarmigans, and capercaillies also are used for some species of grouse.

Grouse add important values for the ecosystem and for humans. Ecologically, they are integral to food chains, eating plants (leaves, berries, seeds) and other animals (insects, and even amphibians and reptiles), while being preyed upon by foxes and other animals. For humans, grouse not only add to the human enjoyment and fascination with nature, particularly with their elaborate courtship displays, but also are a prized game for hunting and for food.

Grouse tend to be plump birds that have a protective coloration of mottled brown, gray, and red feathers, which cover the nostrils and partially or entirely cover the legs, with feathers to the toes.

Most species of grouse are year-round residents, and do not migrate. Lagopus lagopus (ptarmigan or snow grouse) lives in arctic regions of the northern hemisphere, but migrates to the northwestern United States in the winter. These birds feed mainly on vegetables, but will also feed on insects, especially when feeding young.

In all but one species (the willow grouse), males are polygamous, and many species have elaborate courtship displays. The ruffed grouse (Bonasa umbellus) is known for drumming its wings loudly, often while on a fallen log, to attract females. Two species (Tympanuchus cupido or prairie-chicken, and Centrocercus urophasianus or sage grouse) are known for inflating neck air sacs to great size as part of the courtship ritual.

Most grouse are moderately sized birds, of less than 60 centimeters (cm) in length. The capercaillie (Tetrao urogallus), also known as the wood grouse or more specifically western capercaillie, is the largest grouse, reaching over 100 centimeters (cm) in length and four kg in weight. The capercaillie cock, which is much bigger than the hen, weighs 4.3 kg (9.5 lbs) on average and ranges up to 6.3 kg (14 lbs), and has a wingspan of about 1.2 meters (3.9 feet). The hen is much smaller, weighing about half as much as the cock. Her body from beak to tail is approximately 54-63 cm (21-25 inches) long, the wingspan is 70 cm (28 in) and she weighs about 2 kg (4.4 lbs). The greater sage-grouse, Centrocercus urophasianus, is the largest grouse in North America, ranging from 62 to 70 cm.

The ruffed grouse (Bonasa umbellus), is a medium-sized grouse occurring in forests across Canada and the Appalachian and northern United States, including Alaska. They are non-migratory. It is the best known species in North America.

Ruffed grouse have two distinct color phases, gray and red. In the gray phase, adults have a long square brownish tail with barring and a black subterminal band near the end. The head, neck and back are gray-brown; they have a light breast with barring. The ruffs are located on the sides of the neck. These birds also have a "crest" on top of their head, which sometimes lays flat. Both sexes are similarly marked and sized, making them difficult to tell apart, even in hand. The female often has a broken subterminal tail band, while males often have unbroken tail bands. Another fairly accurate method for sexing ruffed grouse involves inspection of the rump feathers. Feathers with a single white dot indicate a female, feathers with more than one white dot indicate that the bird is a male.

Ruffed grouse have never been successfully bred in captivity.

These birds forage on the ground or in trees. They are omnivores, eating buds, leaves, berries, seeds, and insects. According to Johnson (1995): "More than any other characteristic, it is the ruffed grouse's ability to thrive on a wide range of foods that has allowed it to adapt to such a wide and varied range of habitat on this continent. A complete menu of grouse fare might itself fill a book...One grouse crop yielded a live salamander in a salad of watercress. Another contained a small snake."

The male is often heard drumming on a fallen log in spring to attract females for mating. Females nest on the ground, typically laying six to eight eggs. Grouse spend most of their time on the ground, and when surprised, may explode into flight, beating their wings very loudly.

Ruffed grouse are hunted across their entire range. Population densities across the continent have declined severely in recent decades, primarily due to habitat loss. Many states in the United States have open grouse hunting seasons that run from October through January, but hunting is not considered to be a significant contributing factor in the population decline. Ruffed grouse are pursued by hunters both with and without the aid of dogs, and in most states are taken legally only with shotguns or through falconry. 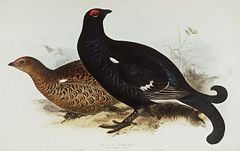 Black grouse can be found across Europe from Great Britain (but not Ireland) through Scandanavia and into Russia. In eastern Europe they can be found in Poland, Latvia, Estonia, Lithuania, and Poland. There is a population in the Alps, and isolated remnants in Germany, Denmark, France, and Holland.

As with many gamebirds, the male is larger than the female at 49-55 cm compared to her 40-45 cm length. The cock is very distinctive, with black plumage, apart from red wattles and a white wingbar, and a lyre-shaped tail, which appears forked in flight. His song is loud, bubbling, and somewhat dove-like. The female is grayish-brown and has a cackling call. She takes all responsibility for nesting and caring for the chicks, as is typical with gamebirds. The male and female are sometimes referred to by their folk names, blackcock and grayhen respectively.

Black grouse have a very distinctive and well recorded courtship ritual. At dawn in the spring, the males strut around in a traditional area and display while making a highly distinctive mating call. This process is called a Lek—the grouse are said to be leking. 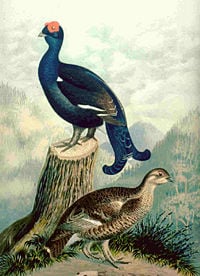 This species is declining in western Europe due to loss of habitat, disturbance, predation by foxes, crows, and so forth, with small populations gradually dying out. They have declined in the UK (especially England), having disappeared from many of their former haunts.

Retrieved from https://www.newworldencyclopedia.org/p/index.php?title=Grouse&oldid=1060912
Categories:
Hidden category:
This page was last edited on 28 November 2021, at 20:47.
Content is available under Creative Commons Attribution/Share-Alike License; additional terms may apply. See Terms of Use for details.