Archaeopteryx is a Jurassic fossil bird that shares both bird and reptile features; it is widely accepted as the earliest and most primitive known bird. Fossils show the presence of wings and feathers, as in birds, but also teeth (which modern birds do not have), claws on the wings, and a long, lizard-like tail, with tail vertebrate, such as with reptiles (Mayr 2001). The description of the first intact specimen in 1861 (two years after Charles Darwin published The Origin of Species), set off a firestorm of debate about evolution and the role of transitional fossils that endures to this day.

Over the years, ten specimens of Archaeopteryx have been found, all in a limestone deposit near Solnhofen, Germany. The fine-grained limestone, which preserves detailed casts of features not often fossilized, is used by artists and printers for lithographic plates, thus the species name Archaeopteryx lithographica. These fossils are attributed to the Upper (or Late) Jurassic period, about 145 million years ago.

As a fossil that fills a large gap between reptiles and birds, Archaeopteryx has been referred to as a missing link (Mayr 2001). At one point, it was also widely considered a direct ancestor of modern birds, but many current paleontologists view it now as a side branch. There are divergent theories on whether birds arose from archosaurian reptiles in the late Triassic, more than 200 million years ago, or from theropod dinosaurs in the more recent Cretaceous, about 80-110 million years ago. The two camps, understandably, view differently where Archaeopteryx fits in the scheme between reptiles, or dinosaurs, and modern birds.

Since its timely discovery in 1860 and description the next year, shortly after Darwin predicted such transitional fossils in The Origin of Species, Archaeopteryx has been presented as evidence for Darwin's theory of descent with modification. As such it has gained a great deal of notoriety, not only in scientific discourse but also in textbooks and the public media. Nonetheless, despite the significance attributed to this species, Archaeopteryx does not significantly illuminate possible transitions between reptiles/dinosaurs and birds, since it appears in the fossil record fully formed, with a lack of any transitional forms between reptiles or dinosaurs and itself. The history surrounding Archaeopteryx does reveal, however, much about the process of science, with competing theories espoused by different camps, and at times a tendency to espouse seemingly definitive conclusions beyond that of the known facts.

Based on the fossil evidence, Archaeopteryx was similar in size and shape to a magpie, with short, broad wings and a long tail. The feathers resemble those of living birds, but Archaeopteryx was rather different from any bird we know of today: it had jaws lined with sharp teeth, three fingers ending in curving claws, and a long bony tail.

It is unclear where Archaeopteryx fits in the evolution of birds. There are two major conjectures regarding the origin of birds. The thecodont theory holds that birds arose from archosaurian reptiles, perhaps in the late Triassic more than 200 million years ago. The dinosaurian theory holds that birds evolved from theropod dinosaurs at an earlier date.

Some consider Archaeopteryx to be a powerful piece of evidence that birds evolved from dinosaurs. The skeleton is similar to the dinosaurs of the families Dromaeosauridae and Troodontidae. However, Archaeopteryx also presents a complication in this matter. The most bird-like, bipedal dinosaurs, which are presented as the ancestors of birds, actually trace to the Cretaceous, about 70 to 100 million years ago, or well after Archaeopteryx, the earliest known bird, had disappeared.

Mayr (2001) feels that Archaeopteryx, which lived 145 million years ago in the Jurassic, has so many advanced avian characters that the original birds must have existed sometime earlier, perhaps in the Triassic, 200 million years ago. Yet, there have not been any bird-like dinosaurs known from the Jurassic, or earlier. This would offer support for the view that birds arose from archosaurian reptiles.

The "Thermopolis" specimen, recently donated to the Wyoming Dinosaur Center in Thermopolis, Wyoming, and described in the December 2, 2005 Science journal article "A well-preserved Archaeopteryx specimen with theropod features," shows that Archaeopteryx lacked a reversed toe—a universal feature of birds—limiting its ability to perch in trees and implying a terrestrial lifestyle. This has been interpreted as evidence of theropod ancestry. The specimen also has a hyperextendible second toe. "Until now, the feature was thought to belong only to the species' close relatives, the deinonychosaurs."

There is some controversy about whether Archaeopteryx could genuinely fly, or only hop around and glide from trees. The lack of a large breastbone suggests it was not a strong flier, but flight muscles might have attached to the bird's thick, boomerang-shaped wishbone, a birdlike feature. The large wings and long tail, however, suggest that it was both stable and maneuverable in the air. The shape of the wings is similar to birds that fly through trees and brush.

In 2004, scientists analyzing a detailed CT scan of Archaeopteryx's braincase concluded that its brain was significantly larger than that of most dinosaurs, indicating that it possessed the brain size necessary for flying. The overall brain anatomy was reconstructed using the scan. The reconstruction showed that the regions normally associated with vision took up nearly one-third of the brain. Other well developed areas involved hearing and muscle coordination (Witmer 2004). The skull scan also revealed the structure of the inner ear. The structure more closely resembles that of modern birds than the inner ear of reptiles. These characteristics taken together lead to the speculation that Archaeopteryx had the keen sense of hearing, balance, spatial perception, and coordination needed to fly. (Alnso, et al. 2004)

Archaeopteryx continues to play an important part in scientific debates about the origin and evolution of flight. Some scientists see Archaeopteryx as climbing through the trees like a squirrel, following the idea that birds evolved from tree-dwelling gliders (the "trees down" hypothesis for the evolution of flight proposed by O.C. Marsh). Other scientists see Archaeopteryx as running quickly along the ground, supporting the idea that birds evolved flight by running (the "ground up" hypothesis proposed by Samuel Wendall Williston). It was noted in the section above that the Thermopolisspecimen showed the lack of a reversed toe, which is used by birds for perching, and thus supporting the idea of a terrestrial existence. So far, Archaeopteryx has perhaps produced as many questions as answers, and the latest findings on this fossil are unlikely to be the last word. 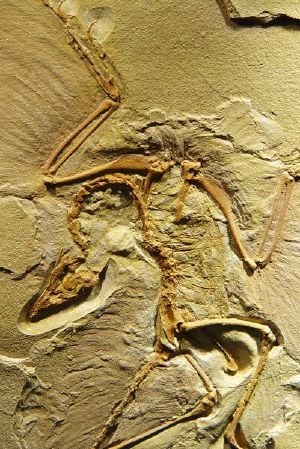 Ten fossils have been found, nine of which are described below. The relationships of the specimens are problematic; most specimens had been given their own species name at one point or another. The Berlin specimen has been referred to as Archaeopteryx siemensii, the Eichstatt specimen as Jurapteryx recurva, the Munich specimen as Archaeopteryx bavarica, and the Solnhofen specimen was referred to as Wellnhoferia grandis.

Recently, it has been argued that all specimens belong to the same species; however, significant differences do exist between specimens. In particular, the Munich and Eichstatt specimens differ from the London, Berlin, and Solnhofen specimens in being smaller, having different finger proportions, and in having more slender snouts lined with sharp teeth. These differences are as large as or larger than the differences seen today between adults of different bird species. However, it is also possible that these differences could be explained by different ages.