Chickpea is the common name for an annual plant, Cicer arietinum, of the Fabaceae (or Leguminosae) family that is widely cultivated for its typically yellow-brown, pea-like seeds. The name also is used for these edible seeds, which form in short pods and are popular in various cuisines. Other common names for this seed are garbanzo bean, Indian pea, ceci bean, bengal gram, chana, kadale kaalu, sanaga pappu, and shimbra. Chickpea is considered the third most important pulse in the world, being widely grown in many subtropical and warm-temperate regions (Mansfeld 2008).

With their firm texture and a flavor that sometimes has been described as mild and nutlike, chickpeas have been a popular and nutritious food, used in salads, soups, stews, and such diverse dishes as hummus and couscous (Herbst 2001). They also have been one of the earliest cultivated vegetables (Philologos 2007; Zohary and Hopf 2000). In addition, the plant is grown as forage for domestic animals. Chickpea, Cicer arietinum, is a member of the legume, pea, or pulse family, ''Fabaceae. Also called Leguminosae, this family of flowering plants is one of the largest plant families and includes such important plants as beans, peas, peanuts, lupines, alfalfa, clover, and acacia, and many others. As a member of the Faboideae (or Papilionoideae) subfamily, chickpea is characterized by one petal being large and with a crease in it, while the two adjacent petals are on the sides, and the two bottom petals are joined together at the bottom, forming a boat-like structure.

Cicer arietinum grows to between 20 and 60 centimeters high and has small, feathery, pinnate leaves on either side of the stem. One seedpod contains one to three round, irregular-shaped, typically buff-colored seeds that are slightly larger than the average pea (Herbst 2001). The flowers are white or sometimes reddish-blue.

There are two main kinds of chickpeas commercially. Desi has small, darker seeds and a rough coat and is cultivated mostly in the Indian subcontinent, Ethiopia, Mexico, and Iran (Mansfeld 2008). Kabuli has lighter colored, larger seeds and a smoother coat, and is mainly grown in Southern Europe, Northern Africa, Afghanistan, and Chile, and also was introduced during the eighteenth century to the Indian subcontinent (Mansfeld 2008).

Kabuli (meaning "from Kabul" in Hindi, since they were thought to have come from Afghanistan when first seen in India) is the type widely grown throughout the Mediterranean.

Desi (meaning "country" or "local" in Hindi) is also known as Bengal gram or kala chana. Desi is likely the earliest form, since it closely resembles seeds found both on archaeological sites and the wild plant ancestor of domesticated chickpeas (cicer reticulatum), which only grows in southeast Turkey, where it is believed to have originated. Desi chickpeas have a markedly higher fiber content than Kabulis and hence a very low glycemic index, which may make them suitable for people with blood sugar problems (Mendosa 2007). The desi type is used to make Chana Dal, which is a split chickpea with the skin removed.

Chickpeas need a subtropical, or tropical climate with more than 400 millimeters of annual rain for optimal growth. They can be grown in a temperate climate but yields will be much lower. Chickpeas are grown popularly in the Mediterranean, western Asia, Indian subcontinent, and Mexico. Domestically, they can be sprouted within a few days all year round with a sprouter on a windowsill.

Chickpeas have an ancient history, and were one of the earliest cultivate vegetables. Remains from 7,500 years ago have been found in the Middle East (Philologos 2007). Domesticated chickpeas have been found in the aceramic levels of Jericho (Pre-Pottery Neolithic B), along with Cayönü in Turkey, and in Neolithic pottery at Hacilar, Turkey. They are found in the late Neolithic (about 3500 B.C.E.) at Thessaly, Kastanas, Lerna, and Dimini. In southern France, Mesolithic layers in a cave at L'Abeurador, Aude have yielded wild chickpeas carbon dated to 6790±90 B.C.E. (Zohary and Hopf 2000).

By the Bronze Age chickpeas were known in Italy and Greece. In classical Greece, they were called erébinthos and eaten as a staple, a dessert, or consumed raw when young. The Romans knew several varieties, such as venus, ram, and punic chickpeas. They were both cooked down into a broth and roasted as a snack. The Roman gourmet Apicius gives several recipes for chickpeas. Carbonized chickpeas have been found at the Roman legion fort at Neuss (Novaesium), Germany in layers from the first century C.E., along with rice. 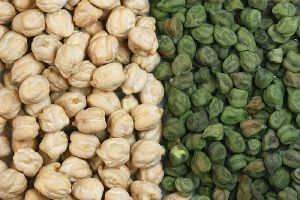 Chickpeas are mentioned in Charlemagne's Capitulare de villis (about 800 C.E.) as cicer italicum, as grown in each imperial demesne. Albertus Magnus mentions red, white, and black varieties. Culpeper noted "chick-pease or cicers" are less "windy" than peas and more nourishing. Ancient people also associated chickpeas with Venus because they were said to offer medical uses, such as increasing semen and milk, provoking menstruation and urine, and helping to treat kidney stones. Wild cicers were thought to be especially strong and helpful.

Today, India is the world leader in chickpea production followed by Pakistan, and Turkey. Other major producers are Ethiopia, and Mexico (Mansfeld 2008).

Chickpeas are a rich source of copper, a good source of folate and zinc, and a source of protein, vitamin A, and iron (Bender and Bender 2005). They are also very high in dietary fiber and hence a healthy source of carbohydrates for persons with insulin sensitivity or diabetes. Chickpeas are low in fat and most of this is polyunsaturated.

Chickpeas are used extensively in the cuisines of the Mediterranean, India, the Middle East, and in various Mexican dishes (Herbst 2001). They also are popular in parts of the Western and Southwestern United States, and are used in Spanish stews and Italian minestrone (Herbst 2001). 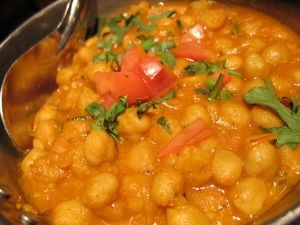 Mature chickpeas can be cooked and eaten cold in salads, cooked in stews, and eaten in soups. They also can be ground into a flour called gram flour (also known as besan, and used primarily in Indian cuisine), ground and shaped in balls and fried as falafel, fermented to make an alcoholic drink similar to sake, stirred into a batter and baked to make farinata, cooked and ground into a paste called hummus, or roasted, spiced, and eaten as a snack (such as leblebi).

Chick peas and bengal grams are used to make curries and are one of the most popular vegetarian foods in India, Pakistan, Bangladesh, and the United Kingdom. On the Indian subcontinent, chickpeas are called kadale kaalu (Kannada), chana (Hindi and other Indic languages), chhola (Bengali), and konda kadalai or pothu kadalai (Tamil), where they are a major source of protein in a mostly vegetarian culture.

Many popular Indian dishes are made with chickpea flour, such as mirchi bajji and mirapakaya bajji telugu. In India, unripe chickpeas are often picked out of the pod and eaten as a raw snack and the leaves are eaten as a green vegetable in salads. Chickpea flour is also used to make "Burmese tofu," which was first known among the Shan people of Burma. The flour is also used as a batter to coat various vegetables and meats before frying, such as with panelle, a chickpea fritter from Sicily. In the Philippines, garbanzo beans preserved in syrup are eaten as sweets and in desserts such as halo-halo. Ashkenazi Jews traditionally serve whole chickpeas at a Shalom Zachar celebration for baby boys.

Dried chick peas need a long cooking time (one to two hours) but will not easily fall apart when cooked longer. If soaked for 12-24 hours before use, cooking time can be considerably shortened (30 minutes).