Clover, or trefoil, is the common name for any of the various herbaceous, leguminous plants comprising the genus Trifolium in the pea family Fabaceae, typically characterized by trifoliolate leaves (having three leaflets) and heads or dense spikes of small red, purple, white, or yellow flowers. There are about 300 species in this genus. The genus has a cosmopolitan distribution with the highest diversity in the temperate Northern Hemisphere, but also occurring in South America and Africa.

"Clover" is also used for plants in other genera within the family Fabaceae. Sweet clover refers to all but one species (sour clover, Melilotus indica) in the genus Melilotus. Bush clover, or Japanese clover, is applied to plants of the genus Lespedeza. Non-leguminous plants outside the family Fabaceae having the name clover include water clover (genus Marsilea of family Marsileaceae) and owl's clover (genus Triphysaria of the family Scrophulariaceae).

Clover is used for pasture, hay, silage, replenishing nitrogen and other nutrients in the soil, control of erosion, and as a honeybee nectar source. The McGraw-Hill Concise Encyclopedia of Science & Technology (2005) states that "collectively they represent the most important genus of forage legumes in agriculture."

In its relations with bacteria and bees, clover exhibits the harmony of nature in which symbiotic species contribute to the interdependence and mutual prosperity of the local ecosystem and the larger biosphere. As the host of nitrogen-fixing bacteria (rhizobia) living in its root nodules, the clover plant provides habitat and food for the bacteria, which in turn convert atmospheric nitrogen into a form the plant can use for photosynthesis. Together, the bacteria and the clover through the life cycle of the plant enrich soil with nitrogen and also produce a luxuriant foliage favored as forage by many animals.

At another level, clover flowers emit a fragrance that attracts bees to gather nectar for making honey while the bees moving from flower to flower provide cross-fertilization necessary for reproduction of the clover plants. Humans extend the pattern by managing and spreading clover widely in the world as it provides important agricultural and even aesthetic values to people.

Clover is a member of the flowering plant family, Fabaceae (also called Leguminosae). The Fabaceae family, one of the largest plant families, includes beans, peas, peanuts, lupines, alfalfa, acacia, and many others. 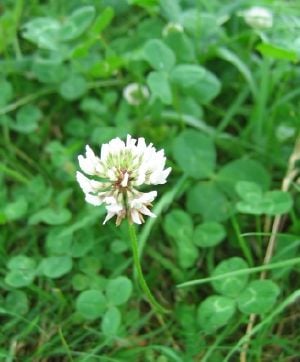 All members of this family have five-petaled flowers in which the superior ovary (an ovary attached to the receptacle above the attachment of other floral parts) ripens to form a "pod," technically called a legume, whose two sides split apart, releasing the seeds that are attached to one or both seams.

The clovers, members of the genus Trifolium, are small annual, biennial, or short-lived perennial herbaceous plants. The alternate, compound leaves usually are trifoliate (rarely 5- or 7-foliate), with stipules adnate to the leaf-stalk, and heads or crowded spikes of small, fragrant, red, purple, white, or yellow flowers; the small, few-seeded pods are enclosed in the calyx.

The scientific name derives from the Latin tres, "three," and folium, "leaf," so called from the characteristic form of the leaf, which has three leaflets (trifoliate); hence the popular name trefoil. 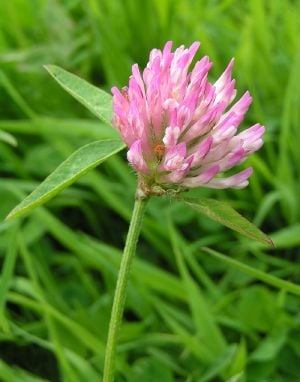 Clover, either sown alone or in mixture with ryegrass, has for a long time formed a staple crop for soiling, for several reasons: it grows freely, shooting up again after repeated mowings; it produces an abundant crop; it is palatable to and nutritious for livestock; it grows in a great range of soils and climates; and it is appropriate for either pasturage or green composting.

In many areas, particularly on acidic soil, clover is short-lived because of a combination of insect pests, diseases, and nutrient balance; this is known as "clover sickness." When crop rotations are managed so that clover does not recur at shorter intervals than eight years, it grows with much of its pristine vigor.

Clover sickness in more recent times may also be linked to pollinator decline; clovers are most efficiently pollinated by bumblebees, which have declined as a result of agricultural intensification. Honeybees can also pollinate clover, and beekeepers are often in heavy demand from farmers with clover pastures. Farmers enjoy the benefits of increased reseeding that occurs with increased bee activity, which means that future clover yields remain abundant. Beekeepers benefit from the clover bloom as clover is one of the main nectar sources for honeybees. 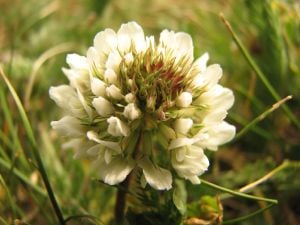 T. repens, white or Dutch clover, is a perennial that is abundant in meadows and good pastures. The flowers are white or pinkish, becoming brown and deflexed as the corolla fades. T. hybridum, alsike or Swedish clover, is a perennial that was introduced early in the nineteenth century and has now become naturalized in Britain. The flowers are white or rosy, and resemble those of the last species. T. medium, meadow or zigzag clover, a perennial with straggling flexuous stems and rose-purple flowers, is of little agricultural value.

Other British species include:

Clovers are a valuable survival food for people, as they are high in protein, widespread, and abundant. They are not easy to digest raw, but this can be easily fixed by juicing them or boiling them for five to ten minutes. Dried flower heads and seedpods can also be ground up into a nutritious flour and mixed with other foods. Dried flower heads can also be steeped in hot water for a healthy, tasty tea 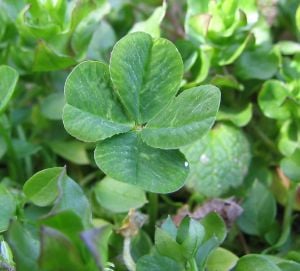 Shamrock, the traditional Irish symbol coined by Saint Patrick for the Holy Trinity, is commonly associated with clover, though also sometimes with Oxalis species, which are also trifoliate (that is, they have three leaves).

Clovers occasionally have leaves with four leaflets, instead of the usual three. These four-leaf clovers, like other rarities, are considered lucky. A common idiom is "to be in clover," meaning to be living a carefree life of ease, comfort, or prosperity. 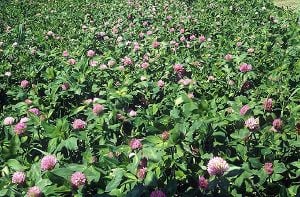