Saint Patrick (fifth century C.E.) was a Christian missionary involved in the evangelization of Ireland. Born in Britain but captured as a youth by Irish warriors, it is said that Patrick was called by God to escape from his slavery. He fled to mainland Europe where he studied at a monastery to become a missionary. Eventually consecrated as a bishop, he returned to Ireland to spread the gospel to the people.

Many legends are told about St. Patrick's activities in Ireland including a story that he used the three-leaf shamrock to teach the masses about the Holy Trinity. It is also said that he banished all serpents from the island. Today, St. Patrick is celebrated as Ireland's patron saint.

The exact location of St. Patrick's birthplace is uncertain. His own writing, Confessio identifies his birthplace as the town of vico banavem in Taburnia. However, the location of this town has never been identified. Many think that St. Patrick was born somewhere along the west coast of Scotland. Suggested sites for his birthplace include Dumbarton, Furness, Somerset, and Kilpatrick.[1] 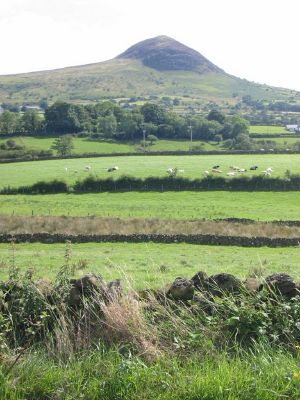 Slemish, mountain in County Antrim where St Patrick is reputed to have shepherded as a slave

Patrick was born during the fifth century when Britain was undergoing turmoil following the withdrawal of Roman troops due to the collapse of Roman central authority. Having been under the Roman cloak for over 350 years, the Romano-British had to begin looking after themselves. Populations were on the move and the recently converted British Christians were being colonized by pagan Anglo-Saxons. At this time, Patrick was swept away by Irish marauders when he was only 16 years old. Along with thousands of other people, Patrick was sold as a slave. He was sold to an especially cruel master who was a Druid priest by the name of Milchu. Patrick's captivity lasted for six years. Although it was harsh, his time as a slave in Ireland allowed him to master the Celtic culture and language. It was on the hillsides and woodlands near Ballymena, where Patrick tended sheep, that he formed a profound relationship with God. Patrick stated "The love of God and his fear grew in me more and more, as did the faith, and my soul was roused, so that, in a single day, I have said as many as a hundred prayers and in the night, nearly the same. I prayed in the woods and on the mountain, even before dawn. I felt no hurt from the snow or ice or rain.”[2]

It is said that one day an angel appeared to Patrick in a dream and admonished him, telling him to leave the Druid’s place of servitude. In obedience, he escaped, traveling approximately two hundred miles on foot. When he reached Westport, a city along the coast, he boarded a ship and sailed on the Irish Sea back to Britain. Although he was back in his homeland, his heart was in service to God. His zeal for a religious life led him to Auxerre, France. There Patrick studied under St. Germaine of Auxerre for 18 years and was eventually appointed into the priesthood. St. Germaine recommended the new priest to Pope Celestine who gave St. Patrick his name "Patecius" or "Patritius." It later became "Pater Civium" (the father of his people).

St. Patrick longed to return to Ireland. This desire became a reality when St. Germaine asked him to go to Erin, (another name for Ireland) as a missionary.

Around the year 432 C.E., St. Patrick and his companions arrived in hostile Irish territory at the mouth of Vantry River. Patrick visited Ballymena where he had been a slave. He sent word to his former master, Milchu, that in payment for his cruelty and the years of Patrick’s servitude, he was to receive blessing and freedom as God's child. However, when Milchu learned of the Irish apostles coming, he was afraid and committed suicide.

His first converted patron was St. Dichu, a Druid priest, who raised his sword to kill St. Patrick, was paralyzed and unable to strike. This experience created in Dichu respect and loyalty toward Patrick, and he made a gift of a large sabhall (barn) for a church sanctuary. This first sanctuary became, in later years, St. Patrick’s chosen retreat. A monastery and church were erected there, and there Patrick died; the site, Saul County Down, retains the name Sabhall (pronounced "Sowel").

The Episcopal See at Armagh was organized by St. Patrick. The choice of Armagh may have been determined by the presence of a powerful king. There St. Patrick had a school and presumably a small familia in residence. From this base he made his missionary journeys. He established the churches into territorial sees, as was common in both the east and west. He encouraged the Irish to dedicate themselves to God by becoming monks and nuns, although it took many centuries before the monastery was the principal unit of the Irish Church.

St. Patrick’s chief concerns were the raising of native clergy and abolishing Paganism, idolatry, and sun worship. He made no distinction of classes in his preaching and was himself ready for imprisonment or death. He was the first writer to condemn all forms of slavery.

St. Patrick frequently wrote that he expected to be violently killed or enslaved again. His Letter to the Soldiers of Coroticus protesting British slave trading and the stance he took against the slaughter of Irish Christians by Coroticus's Welshmen put his life in danger. This is the first identified literature of the British or Celtic Catholic Church.[3]

Patrick was not the first Christian missionary to evangelize Ireland; Men such as Secundus and Palladius were active there before him. However, tradition accredits St. Patrick as having the most impact. St. Patrick's missionary work was concentrated mostly in the provinces of Ulster and Connaught, which had little familiarity with Christianity. St. Patrick traveled extensively throughout the country preaching, teaching, building churches, opening schools and monasteries, and converting chiefs and Bards. He is said to have consecrated 350 Bishops. It is also alleged that his preaching was supported by miracles.

Patrick died in 493 C.E. according to the latest reconstruction of the old Irish annals. Prior to the 1940s it was believed without doubt that he died in 461 and thus had lived in the first half of the fifth century. However, a lecture entitled The Two Patricks, published in 1942 by T. F. O'Rahilly, caused enormous controversy by proposing that there had been two "Patricks:" Palladius and Patrick. O’Rahilly claimed that what we now know of St. Patrick was actually, in part, a conscious effort to meld the two hagiographic personalities into one. Decades of contention have ended with most historians asserting that St. Patrick was indeed most likely to have been active in the mid to late fifth-century.

The compiler of the Annals of Ulster stated that in the year 553 C.E.:

The placement of this event in the year 553 C.E. would certainly seem to place St. Patrick's death in 493 C.E., or at least in the early years of that decade.

For most of Christianity's first one thousand years, canonizations were done on the diocesan or regional level. Relatively soon after very holy people died, the local Church affirmed that they could be liturgically celebrated as saints.[4] For this reason, St. Patrick was never formally canonized by the Pope.

There are many legends associated with the life of St. Patrick, which helped to promote the Roman Catholic faith among the Irish population.

It is said that at the time of St. Patrick, Ireland was a land of many idols. The most famous of these was called Crom Crauch located in Leitrim. This idol was a huge rock, overlaid in gold, surrounded by twelve brass covered stones, representing the sun, moon, and stars. People would offer their firstlings and other sacrifices to this idol. Patrick was said to have thrown down Crom Crauch with the "staff of Jesus,” and to call out its demons.

Another famous story is told of the annual vernal fire lit by the high king of Ireland at Tara. All the fires were to be extinguished so they could be renewed from the sacred fire from Tara. Patrick lit a rival, miraculously inextinguishable Christian bonfire on the hill of Slane, at the opposite end of the valley.

Pious legend also credits Patrick with banishing snakes from the island. Since post-glacial Ireland never actually had snakes, it is certain that snakes were used as a symbol.[5] One suggestion is that snakes referred to the serpent symbolism of the Druids of the time. One could find such a symbol on coins minted in Gaul. The snakes could also have been referring to beliefs such as Pelagianism, which is symbolized by serpents.

Legend also credits Patrick with teaching the Irish about the concept of the Trinity by showing them the shamrock, a three-leaved clover. Through this example, Patrick highlighted the Christian dogma of “three divine persons in the one God” (as opposed to the Arian belief that was popular in Patrick's time). 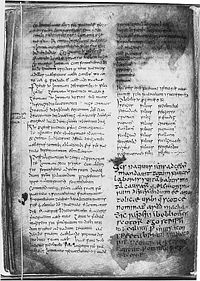 A page of text from the Book of Armagh.

The major writings of St. Patrick's life are his "Confessio," (Confessions), his Epistola ad Coroticum, (A Letter to the Soldiers of Coroticus) and his Fáed Fíada, (Breast-Plate Prayer), which was thought to have been written to mark the end of Paganism in Ireland.

Additionally, a ninth century Irish manuscript known as the Book of Armagh (Dublin, Trinity College Library, MS 52) is thought to have belonged to St. Patrick and, at least in part, to be a product of his hand. The manuscript is also known as the Canon of Patrick and contains important early texts relating to St. Patrick. These include two Lives of St. Patrick, one by Muirchu Maccu Machteni and one by Tirechan. Both texts were originally written in the seventhth century. The manuscript also includes other miscellaneous works about St. Patrick including the Liber Angueli (Book of the Angel), in which St. Patrick is given the premarital rights of Armagh by an angel.

The people of medieval Ireland placed a great value on this manuscript. It was one of the symbols of the office for the Archbishop of Armagh.

The Orthodox Church, especially Orthodox Christians living in the British Isles and North America, revere St. Patrick. There have even been icons dedicated to him.[6]

St. Patrick is also credited with fostering the development of arts and crafts and introducing the knowledge of the use of lime as mortar in Ireland. He is responsible for the initial construction of clay churches in Ireland in the fifth century. Another of St. Patrick's achievements was teaching the Irish to build arches of lime mortar instead of dry masonry. These beginnings of ceramic work developed into organized crafts, and that is how St. Patrick became a patron saint of engineers.[7]

St. Patrick is also known as the Patron Saint of Nigeria. Nigeria was evangelized primarily by Irish missionaries and priests from Saint Patrick's Missionary Society known as the Kiltegan Missionaries.

Retrieved from https://www.newworldencyclopedia.org/p/index.php?title=Saint_Patrick&oldid=1092564
Categories:
Hidden category:
This page was last edited on 23 December 2022, at 00:49.
Content is available under Creative Commons Attribution/Share-Alike License; additional terms may apply. See Terms of Use for details.