Beech is the common name for any member of the genus Fagus, a group of deciduous trees in the beech family Fagaceae. They are characterized by smooth gray bark, long, slender, scaly winter buds, and three-angled nuts (beechnuts). The term also is used for the wood of these trees, which is of commercial importance.

In advancing their own development, preservation, and reproduction, beech trees offer important values to the ecosystem, as well as commercial and aesthetic values for people. Ecologically, the beech nut provides food for many animals, including ruffed grouse, wild turkeys, raccoons, and squirrels, while Lepidopteran caterpillars feed on beech leaves. For humans, the wood of beech trees is harvested for uses such as flooring, containers, furniture, and woodenware. Beech trees often are popular as ornamental trees, providing beauty and shade.

The term beech also is used for several other trees, and in particular members of the superficially similar but taxonomically distinct genera Carpinus ("hornbeam") and Nothofagus ("false beech").

Beech trees are native to temperate and subtropical areas of Europe, Asia, and North America. Their bark is thin, gray, and smooth even in older trees. Beeches have alternate, simple, slender leaves that are entire or sparsely toothed, and from 5-15 centimeters (cm) long and 4-10 cm broad. The leaves typically are pale to dark green but turn golden or copper-orange in autumn.

The flowers of beeches are small, single-sex, wind-pollinated catkins, produced in spring shortly after the new leaves appear. The fruit is a small, sharply three-angled nut 10-15 millimeters long, borne in pairs in soft-spined husks 1.5-2.5 cm long, known as cupules. The nuts are edible for humans, though bitter with a high tannin content, and can be called beechmast.

The Southern Beeches Nothofagus, previously thought to be closely related to beeches, have now been placed in the separate family Nothofagaceae. Also known as false beeches, they are found in Australia, New Zealand, New Guinea, New Caledonia, and South America.

The beech blight aphid (Grylloprociphilus imbricator) is a common pest of beech trees. 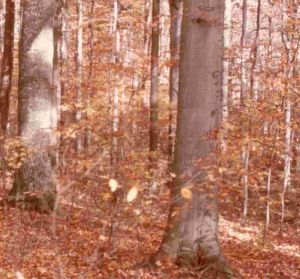 The American Beech, Fagus grandifolia, is a species of beech native to eastern North America, from Nova Scotia west to southern Ontario, west to Wisconsin and south to eastern Texas and northern Florida in the United States. Trees in the southern half of the range are sometimes distinguished as a variety, F. grandifolia var. caroliniana. A related beech native to the mountains of central Mexico is sometimes treated as a subspecies of American Beech, but more often as a distinct species, Mexican Beech (Fagus mexicana). 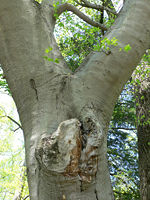 Fagus grandifolia grows to 65 to 115 feet (20 to 35 meters) tall, with smooth, silvery-gray bark. The leaves are dark green, simple, and sparsely-toothed with small teeth, 6-12 cm long (rarely 15 cm), with a short petiole. The winter twigs are distinctive among North American trees, being long and slender (15-20 mm by 2-3 mm) with two rows of overlapping scales on the buds. The tree is monoecious, with flowers of both sexes on the same tree. The fruit is a small, sharply-angled nut, borne in pairs in a soft-spined, four-lobed husk.

The American Beech is a shade-tolerant species, favoring the shade more than other trees, commonly found in forests in the final stage of succession. Although sometimes found in pure stands, it is more often associated with sugar maple, yellow birch, and eastern hemlock, typically on moist, well drained slopes and rich bottomlands. Near its southern limit, it often shares canopy dominance with southern magnolias.

Beech bark disease has become a major killer of Beeches in the Northeastern United States.

The European Beech or Common Beech (Fagus sylvatica) is a species of beech native to Europe. The natural range extends from southern Sweden (with some isolated locations in southern Norway) to central Italy, west to France, northern Portugal, and central Spain, and east to northwest Turkey, where it integrates with the Oriental Beech (F. orientalis), which replaces it further east. In the southern part of its range, around the Mediterranean, it grows only in mountain forests, at 1,969-5,906 feet (600-1,800 meters) altitude. Although often regarded as native in southern England, recent evidence has shown that it did not arrive in England until about 4000 B.C.E., or two thousand years after the English Channel formed after the ice ages; it was almost certainly an early introduction by Stone age man, who used the nuts for food.

The tree’s appearance varies according to its habitat; in forest conditions, it tends to have a long, slender, light-gray trunk with a narrow crown and erect branches; in isolation with good side light, the trunk is short with a large and widely spreading crown with very long branches.

The leaves are alternate, simple, and entire or with a slightly crenate margin, 5-10 cm long and 3-7 cm broad, with 6-7 veins on each side of the leaf (7-10 veins in Fagus orientalis). When crenate, there is one point at each vein tip, never any points between the veins. The buds are long and slender, 15-30 mm long and 2-3 mm thick, but thicker (to 4-5 mm) where the buds include flower buds.

The European beech starts to flower when it is between 30 and 80 years old. The flowers are small catkins, which appear shortly after the leaves in spring. The seeds are small triangular nuts 15-20 mm long and 7-10 mm wide at the base; there are two nuts in each cupule, maturing in the autumn 5-6 months after pollination. Flower and seed production is particularly abundant in years following a hot, sunny, and dry summer, though rarely for two years in a row.

Though not demanding of its soil type, the European Beech has several significant requirements: a humid atmosphere (precipitation well distributed throughout the year and frequent fogs) and well drained soil (it can not handle excessive stagnant water). It prefers moderately fertile ground, calcified or lightly acidic, therefore it is found more often on the side of a hill than at the bottom of a clayey basin. It tolerates rigorous winter cold, but is sensitive to spring frost.

A beech forest is very dark and few species of plants are able to survive there, where the sun barely reaches the ground. Young beeches prefer some shade and may grow poorly in full sunlight. In a clear-cut forest, a European Beech will germinate and then die of excessive dryness. Under oaks with sparse leaf cover it will quickly surpass them in height and, due to the beech's dense foliage, the oaks will die from lack of sunlight.

The root system is shallow, even superficial, with large roots spreading out in all directions. The role of the mycorrhizae in the growth of the European Beech is important. Without mycorrhizae, it often does not develop well. The mycorrhizae provide chemical protection of the roots against bacteria and enhanced uptake of mineral nutrients from the soil. The following fungi genera form mycorrhizae with European Beech: Porcini, Milk caps, Amanita, Cantharellus, and Hebeloma.

American Beech is an important tree in forestry. The wood is heavy, hard, tough, and strong, and, until the advent of the modern chainsaw, during lumbering beech trees were often left uncut. As a result, many areas today still have extensive groves of old beeches that would not naturally occur. Today, the wood is harvested for uses such as flooring, containers, furniture, handles, and woodenware.

Likewise, the wood of the European Beech is used in the manufacture of numerous objects and implements. Its fine, short grain makes it an easy wood to work with, easy to soak, dye (except its heartwood), varnish, and glue. Steaming makes the wood even easier to machine. It has an excellent finish and is resistant to compression and splitting. It is particularly well suited for minor carpentry, particularly furniture. From chairs to parquetry (flooring) to staircases, the European Beech can do almost anything other than heavy structural support, so long as it is not left outdoors. Its hardness makes it ideal for making wooden mallets and workbench tops. The wood of the European Beech rots easily if it is not protected by a tar based on a distillate of its own bark (as used in railway sleepers). It is better for paper pulp than many other broadleaved trees though it is only sometimes used for this.

Since the early nineteenth century there have been a large number of ornamental cultivars of European Beech made by horticultural selection, often repeatedly; they include:

The bark of the European Beech and the American Beech is an attraction for vandals who carve names, dates, and other material into it. One such tree in Louisville, Kentucky, in what is now the southern part of Iroquois Park, bore the legend "D. Boone kilt a bar" and the year in the late 1700s. This carving was authenticated as early as the mid-1800s, and the tree trunk section is now in the possession of The Filson Historical Society in Louisville.

In the past, humans also feed on beechnuts, although they are no longer eaten by people. Slightly toxic to man if eaten in large quantities due to the tannins they contain, the nuts were nonetheless pressed to obtain an oil that was used for cooking and in lamps in nineteenth century England. They were also ground to make flour, which could be eaten after the tannins were leached out by soaking.