Turnip is the common name for a root vegetable, Brassica rapa var, rapa (Brassica rapa rapa). This plant is grown in temperate climates worldwide for its bulbous, edible root, and the leaves also are consumed. Small, tender, varieties are grown for human consumption, while larger varieties are grown as feed for livestock. The term turnip also is used for the bulbous storage root.

Turnips have a long history of usage, with domestication tracing back at least to Hellenistic and Roman times, with Pliny the Elder (77 C.E.) considering it one of the most important vegetables of his time. Historically important for human consumption, it also has become an important livestock fodder. As is the case with so many plants and animals, the creativity of human beings is reflected in domestication of the turnip, the development of different varieties, and discovering of numerous uses for it.

The genus to which turnips belong, Brassica, is classified in the mustard or cabbage family, Brassicaceae. This genus is remarkable for containing more important agricultural and horticultural crops than any other genus. Almost all parts of some species or other have been developed for food, including the root (rutabagas, turnips), stems (kohlrabi), leaves (cabbage, brussels sprouts), flowers (cauliflower, broccoli), and seeds (many, including mustard seed, oilseed rape). Some forms with white or purple foliage or flowerheads also are grown sometimes for ornament. This genus also includes a number of weeds, both wild taxa and escapees from cultivation. It includes over 30 wild species and hybrids, and numerous additional cultivars and hybrids of cultivated origin. Most are annuals or biennials, but some are small shrubs.

The genus is native in the wild in western Europe, the Mediterranean, and temperate regions of Asia. In addition to the cultivated species, which are grown worldwide, many of the wild species grow as weeds, especially in North America, South America, and Australia.

The most common type of turnip is mostly white-skinned, apart from the upper 1–6 centimeters, which protrudes above the ground and is purple, red, or greenish wherever sunlight has fallen. This above-ground part develops from stem tissue, but is fused with the root. The interior flesh is entirely white. 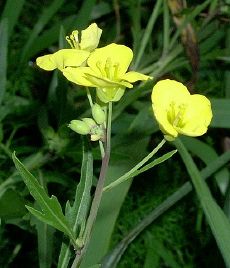 The entire root is roughly spherical, but occasionally is squircle in shape (properties between those of a square and those of a circle). The root typically is about 5–20 centimeters in diameter, and lacks side roots. The taproot (the normal root below the swollen storage root) is thin and 10 centimeters or more in length; it is trimmed off before marketing. The leaves of turnips are also eaten as "turnip greens"

The leaves grow directly from the above-ground shoulder of the root, with little or no visible crown or neck (as found in rutabagas). Turnip leaves sometimes are eaten, and resemble mustard greens; varieties specifically grown for the greens resemble mustard greens more than those grown for the roots, with small or no storage roots. Varieties of B. rapa that have been developed specifically for use as leaf vegetables are called Chinese cabbage. Both leaves and roots of turnips have a pungent flavor similar to raw cabbage or radishes that becomes mild after cooking.

Turnip roots weigh up to about 1 kilogram, although they can be harvested when smaller. Size is partly a function of variety and partly a function of the length of time that the turnip has grown. Most very small turnips (also called baby turnips) are speciality varieties. These are only available when freshly harvested and do not keep well. Most baby turnips can be eaten whole, including their leaves. Baby turnips come in yellow-, orange-, and red-fleshed varieties as well as white-fleshed. Their flavor is mild, so they can be eaten raw in salads like radishes.

Although the turnip is a well-established crop by Hellenistic and Roman times, which leads to the assumption that it was brought into cultivation at a previous time, Zohary and Hopf (2000) note that "there are almost no archaeological records available" to help determine its earlier history and domestication. Wild forms of the turnip, and its relatives the mustards and radishes, can be found in west Asia and Europe, suggesting that their domestication took place somewhere in that area. However Zohary and Hopf (2000) conclude, "Suggestions as to the origins of these plants are necessarily based on linguistic considerations." The 1881 Household Cyclopedia gives the following instructions for field cultivation of turnips:

The benefits derived from turnip husbandry are of great magnitude; light soils are cultivated with profit and facility; abundance of food is provided for man and beast; the earth is turned to the uses for which it is physically calculated, and by being suitably cleaned with this preparatory crop, a bed is provided for grass seeds, wherein they flourish and prosper with greater vigor than after any other preparation.

The first ploughing is given immediately after harvest, or as soon as the wheat seed is finished, either in length or across the field, as circumstances may seem to require. In this state, the ground remains till the oat seed is finished, when a second ploughing is given to it, usually in a contrary direction to the first. It is then repeatedly harrowed, often rolled between the harrowings and every particle of root-weeds carefully picked off with the hand; a third ploughing is then bestowed, and the other operations are repeated. In this stage, if the ground has not been very foul, the seed process.

The next part of the process is the sowing of the seed; this may be performed by drilling machines of different sizes and constructions, through all acting on the same principle. A machine drawn by a horse in a pair of shafts, sows two drills at a time and answers extremely well, where the ground is flat, and the drills properly made up. The weight of the machine ensures a regularity of sowing hardly to be gained by those of a different size and construction. From two to three pounds of seed are sown upon the acre (2 to 3 kg/hectare), though the smallest of these quantities will give many more plants in ordinary seasons than are necessary; but as the seed is not an expensive article the greater part of farmers incline to sow thick, which both provides against the danger of part of the seed perishing, and gives the young plants an advantage at the outset.

Turnips are sown from the beginning to the end of June, but the second and third weeks of the month are, by judicious farmers, accounted the most proper time. Some people have sown as early as May, and with advantage, but these early fields are apt to run to seed before winter, especially if the autumn be favorable to vegetation. As a general rule it may be laid down that the earliest sowings should be on the latest soils; plants on such soils are often long before they make any great progress, and, in the end, may be far behind those in other situations, which were much later sown. The turnip plant, indeed, does not thrive rapidly till its roots reach the dung, and the previous nourishment afforded them is often so scanty as to stunt them altogether before they get so far.

The first thing to be done in this process is to run a horse-hoe, called a scraper, along the intervals, keeping at such a distance from the young plants that they shall not be injured; this operation destroys all the annual weeds which have sprung up, and leaves the plants standing in regular stripes or rows. The hand hoeing then commences, by which the turnips are all singled out at a distance of from 8-12 inches, and the redundant ones drawn into the spaces between the rows. The singling out of the young plants is an operation of great importance, for an error committed in this process can hardly be afterwards rectified. Boys and girls are always employed as hoers; but a steady and trusty man-servant is usually set over them to see that the work is properly executed.

In eight or ten days, or such a length of time as circumstances may require, a horse-hoe of a different construction from the scraper is used. This, in fact, is generally a small plough, of the same kind with that commonly wrought, but of smaller dimensions. By this implement, the earth is pared away from the sides of the drills, and a sort of new ridge formed in the middle of the former interval. The hand-hoers are again set to work, and every weed and superfluous turnip is cut up; afterwards the horse-hoe is employed to separate the earth, which it formerly threw into the furrows, and lay it back to the sides of the drills. On dry lands this is done by the scraper, but where the least tendency to moisture prevails, the small plough is used, in order that the furrows may be perfectly cleaned out. This latter mode, indeed, is very generally practiced.

Carrot and Turnip output in 2005

Pliny the Elder writes that he considered the turnip one of the most important vegetables of his day, stating "it should be spoken of immediately after corn, or the bean, at all events; for next to these two productions, there is no plant that is of more extensive use." Pliny praises it as a source of fodder for farm animals, and this vegetable is not particular about the type of soil it grows in and it can be left in the ground until the next harvest (N.H. 18.34).

Turnip roots are high in dietary fiber, vitamin C and B6, folate, calcium, potassium, and copper. The greens are an excellent source of vitamins A and C, as well as a good source of calcium, iron, and riboflavin (Herbst 2001).

Turnip roots are cooked and eaten as a vegetable, and the greens may be eaten as is or are prepared in such ways as boiling, streaming, stir-frying, and sauteing (Herbst 2001). In Turkey, particularly in the area near Adana, turnips are used to flavor şalgam, a juice made from purple carrots and spices served ice cold.

Turnip roots and leaves serve as fodder for livestock, and may be grazed (with varieties with partially exposes roots) in pasture. 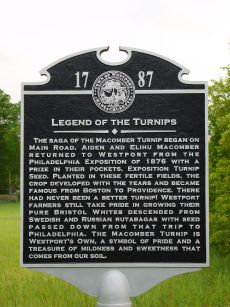 The Macomber turnip is featured in one of the very few historic markers for a vegetable, on Main Road in Westport, Massachusetts.

Turnip lanterns are an old tradition, for their association with Halloween. Laurie Lee, in The Edge of Day, an autobiography of a childhood in the Cotswolds, mentions the Parochial Church Tea and Annual Entertainment, which took place around Twelfth night. "We...saw his red face lit like a turnip lamp as he crouched to stoke up the flames."

The turnip is an old vegetable charge in heraldry. It was used by Leonhard von Keutschach, prince-archbishop of Salzburg. The turnip is still the heart shield in the arms of Keutschach am See