Radish is the common name for herbaceous plant, Raphanus sativus, of the mustard family (Brassicaceae), grown as an annual or biennial, and characterized by a large, fleshy root and white to purple hermaphrodite flowers clustered in a terminal raceme. The term turnip also refers to this edible, succulent, pungent root, which is commercially popular.

As a root vegetable, the radish has been cultivated since pre-Roman times. Its sharp taste offers a unique culinary experience and today radishes are grown and consumed throughout the world. Radishes have numerous varieties, varying in size, color, shape, and duration of required cultivation time. They are generally consumed raw, such as in salads or as an appetizer. There are some radishes that are grown for their seeds; oilseed radishes are grown, as the name implies, for oil production.

Radishes belong to the flowering plant family Brassicaceae (or Cruciferae), also known as the crucifers, the mustard family, or the cabbage family. (Cruciferae is an older name for the family. It means "cross-bearing," because the four petals of their flowers are reminiscent of a cross.) The family contains species of great economic importance, providing much of the world's winter vegetables. In addition to radish, these include cabbage, broccoli, cauliflower, brussels sprouts, collards, mustard, and kale. 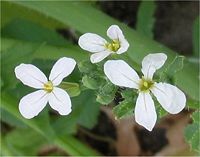 The flowers have 4 petals, typical of Brassicaceae (the mustard family).

Brassicaceae consists only of herbaceous plants with annual, biennial, or perennial lifespans. The leaves are alternate (rarely opposite), sometimes organized in basal rosettes. They do not have stipules. The structure of the flowers is extremely uniform throughout the family. They have four free saccate sepals and four clawed free petals, staggered, and with a typical cross-like arrangement. They have six stamens, four of which are longer (as long as the petals, so relatively short in fact) and are arranged in a cross like the petals and the other two are shorter (tetradynamous flower). The pistil is made up of two fused carpels and the style is very short, with two lobes.

Brassicaceae fruit is a peculiar kind of capsule named siliqua (plural siliquae, American English silique/siliques). It opens by two valves, which are the modified carpels, leaving the seeds attached to a framework made up of the placenta and tissue from the junction between the valves (replum).

The radish, Raphanus sativus, is characterized by white to purple flowers that form ebracteate racemose inflorescences (floral clustera comprising blossoms attached along a central axis and without underlying bracts). They are hermaphrodite (have both male and female organs) and are pollinated by bees and flies (PFAF 2008). Nectar is produced at the base of the stamens and stored on the sepals.

The fleshy, edible root varies in shape (round, oval, or elongated), size (small globes, one-half inch in diameter to those carrot-like giants one and one-half feet in length), and color (white to pink to red to purple to black to various combinations) (Herbst 2001).

Radish comes from the Latin radix, meaning "root" (Herbst 2001). The descriptive Greek name of the genus Raphanus means "quickly appearing" and refers to the rapid germination of these plants. Raphanistrum from the same Greek root is an old name once used for this genus.

Cut-trough radishes; showing the difference between fresh and degraded radishes

There are numerous varieties of radishes, differentiated according to flavor, size, color, and shape. In American markets, the most common variety is the globular or oval-shaped red-skinned radish, which can vary in size from a small cherry to a tiny orange (Herbst 2001). It may vary from mild to peppery in flavor, depending on age and variety (Herbst 2001). The following are some common varieties.

Sometimes referred to as European radishes, or as spring radishes if they are typically planted in cooler weather, summer radishes are generally small and have a relatively short 3-4 week cultivation time.

Black Spanish or Black Spanish Round are occur in both round and elongated forms, and is sometimes simply called the black radish or known by the French Gros Noir d'Hiver. It dates in Europe to 1548 (Aiton 1812), and was a common garden variety in England and France the early 19th century (Lindley 1831). It has a rough black skin with hot-flavored white flesh, is round or irregularly pear shaped (McIntosh 1828), and grows to around 10 centimeters in diameter.

Daikon refers to a wide variety of winter radishes from east Asia. While the Japanese name daikon has been adopted in English, it is also sometimes called the Japanese radish, Chinese radish, or Oriental radish (AMHER 2004). In areas with a large South Asian population, it is marketed as mooli. Daikon commonly have elongated white roots, although many varieties of daikon exist. One well known variety is April Cross, with smooth white roots (Faust 1996; Peterson 1999). Faust (1996) describes Masato Red and Masato Green varieties as extremely long, well suited for fall planting and winter storage. The Sakurajima daikon is a hot flavored variety, which is typically grown to around four to five pounds (1.8 to 2.2 kilograms) when harvested, but which is reputed to grow as heavy as 70 pounds (32 kilograms) when left in the ground (Faust 1996)

The seeds of radishes grow in pods, following flowering that happens when left to grow past their normal harvesting period. The seeds are edible, and are sometimes used as a crunchy, spicy addition to salads (Peterson 1999). Some varieties are grown specifically for their seeds or seed pods, rather than their roots. The Rat-tailed radish, an old European variety thought to have come from East Asia centuries ago, has long, thin, curly pods, which can exceed 20 centimeters in length. In the seventeenth century, the pods were often pickled and served with meat (Peterson 1999). The München Bier variety supplies spicy seeds that are sometimes served raw as an accompaniment to beer in Germany (Williams 2004). 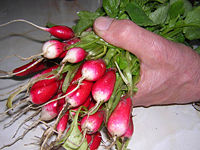 Although the radish was a well-established crop in Hellenistic and Roman times, which leads to the assumption that it was brought into cultivation at an earlier time, Zohary and Hopf (2000) note that "there are almost no archaeological records available" to help determine its earlier history and domestication. Wild forms of the radish and its relatives the mustards and turnip can be found over west Asia and Europe, suggesting that their domestication took place somewhere in that area. However, Zohary and Hopf conclude, "Suggestions as to the origins of these plants are necessarily based on linguistic considerations."

Summer radishes mature rapidly, with many varieties germinating in three to seven days, and reaching maturity in three to four weeks (Faust 1996; Peterson 1999). A common garden crop in the United States, the fast harvest cycle makes them a popular choice for children's gardens (Faust 1996). Harvesting periods can be extended through repeated plantings, spaced a week or two apart (Beattie and Beattie 1938).

Radishes grow best in full sun (Cornell 2006) and light, sandy loams with pH 6.5 to 7.0 (Dainello 2003). They are in season from April to June and from October to January in most parts of North America; in Europe and Japan they are available year-round (due to the plurality of varieties grown). As with other root crops, tilling the soil helps the roots grow (Beattie and Beattie 1938) Most soil types will work, though sandy loams are particularly good for winter and spring crops, while soils that form a hard crust can impair growth (Beattie and Beattie 1938). The depth at which seeds are planted affects the size of the root, from 1 centimeter deep recommended for small radishes to 4 centimeters for large radishes (Peterson 1999).

Radishes are used for food, for medicinal purposes, and in industry for their oil.

Radishes (the root) are rich in ascorbic acid, folic acid, and potassium. They are a good source of vitamin B6, riboflavin, magnesium, copper, and calcium. They are low in calories. One cup of sliced red radish bulbs provides approximately 20 calories or less, coming largely from carbohydrates, making radishes, relative to their size, a very filling food for their caloric value.

The most popular part for eating is the napiform taproot, although the entire plant is edible and the tops can be used as a leaf vegetable. The bulb of the radish is usually eaten raw, most often in salads (Herbst 2001), but tougher specimens can be steamed. The raw flesh has a crisp texture and a pungent, peppery flavor, caused by chewing glucosinolates and the enzyme myrosinase in the radish, that, when brought together form allyl isothiocyanates, also present in mustard, horseradish and wasabi. Radishes can be made more crisp by soaking in icewater for a couple of hours (Herbst 2001).

The seeds of the Raphanus sativus species can be pressed to extract seed oil. Wild radish seeds contain up to 48 percent oil content, and while not suitable for human consumption the oil has promise as a source of biofuel. The oilseed radish grows well in cool climates.