A gallstone is a solid crystalline mass that forms within the body by accretion or concretion of normal or abnormal bile components. Gallstones most commonly form in the gallbladder, but can occur anywhere within the biliary tree, including the common bile duct that leads into the first portion of the small intestine. Gallstones vary in size, ranging from being as small as a grain of sand to as large as a golf ball, and also vary in chemical composition; eighty percent are composed of cholesterol, but bile pigments and calcium salts also may be involved (Haggerty 2002). Gallstones can migrate to various parts of the digestive system and cause severe pain and life-threatening complications (Haggerty 2002).

Gallstones are the fifth most common cause of hospitalization in the United States, with about twenty percent of people over 60 having either one large stone or even several thousand small ones (Haggerty 2002). However, only about one to three percent develop symptoms (Balentine 2007). Gallstones are the most common disease of the gallbladder and bile duct (Haggery 2002).

Gallstones result from the alteration in the chemical composition of bile, such as an excessive increase in concentration of cholesterol (Breslow 2002; Haggerty 2002). Among risk factors are estrogen levels (such as during pregnancy), diabetes, high blood cholesterol levels, smoking, and obesity (Kent 2002). Dietary factors also are suggested, such as a diet high in fats and low in fiber (Haggerty 2002; Kent 2002).

Among treatment options are surgery (including removal of the gallbladder), dissolving of the stones, alternative medicine (acupuncture, Chinese traditional medicine, and so on), and lifestyle changes (dietary changes, exercise, among other)

Gallstones are a concretion formed from bile. Bile is a thick, greenish-yellow fluid that assists in digestion, and in most vertebrates is made in the liver and stored in the gallbladder between meals. The human liver produces about a quart (or liter) of bile per day. In species with a gallbladder (including humans and most domestic animals, but not horses or rats), further modification of bile occurs in this organ. The gallbladder stores and concentrates bile during the fasting state (between meals). Typically, bile is concentrated five-fold in the gallbladder by absorption of water and small electrolytes. Virtually all of the organic molecules are retained. When fats are present in the digestive tract after the consumption of a meal, a hormonal signal causes the gallbladder to contract and release bile in to the small intestine.

The biliary tree or biliary system refers to the pathway in most members of the mammal family whereby bile is secreted by the liver on its way to the duodenum, or small intestine—a path that includes the liver, gallbladder, pancreas, and various ducts, such as the common bile duct leading to the small intestine. Gallstones may occur in any part of the biliary system.

Among the components of bile are water, cholesterol, lecithin, bile pigments (bilirubin and biliverdin), and bile salts and bile acids. Gallstones typically are composed of cholesterol. Bile pigments and calcium salts may also be involved. Cholesterol stones make up about eighty percent of all gallstones (Balentine 2007); pigments stones are less common and form when bilirubin precipitates in bile (Breslow 2002; Balentine 2007).

Gallstones often cause no symptoms. However if they are large, or many, or move into areas where they cause blockage of a duct, whether those connecting the liver, gallbladder, or pancreas with the intestine, then there can be serious complications, including inflammation, severe pain, organ damage, and death (Balentine 2007). 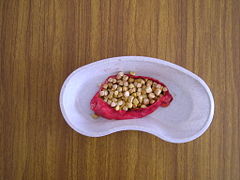 A gallstone's size varies and may be as small as a sand grain or as large as a golf ball (Balentine 2007; Haggerty 2002). The gallbladder may develop a single, often large, stone or many smaller ones.

Gallstones have different appearance, depending on their contents. On the basis of their contents, gallstones can be subdivided into the two following basic types:

Mixed stones account for the majority of stones. Most of these are a mixture of cholesterol and calcium salts. Because of their calcium content, they can often be visualized radiographically.

Pseudolithiasis ("fake stone") is a condition of sludge-like gallbladder secretions that act like a stone.

The ultimate cause of gallstones is alteration in the chemical composition of bile (Haggerty 2002). Progress has been made in understanding the process of gallstone formation and risk factors. Researchers believe that gallstones may be caused by a combination of factors, including inherited body chemistry, body weight, gallbladder motility (movement), and perhaps diet. Additionally, people with erythropoietic protoporphyria (EPP) are at increased risk to develop gallstones (Merck 2003).

Cholesterol gallstones develop when bile contains too much cholesterol and not enough bile salts. Besides a high concentration of cholesterol, two other factors seem to be important in causing gallstones. The first is how often and how well the gallbladder contracts; incomplete and infrequent emptying of the gallbladder may cause the bile to become over-concentrated and contribute to gallstone formation. The second factor is the presence of proteins in the liver and bile that either promote or inhibit cholesterol crystallization into gallstones.

In addition, increased levels of the hormone estrogen as a result of pregnancy, hormone therapy, or the use of combined (estrogen-containing) forms of hormonal contraception, may increase cholesterol levels in bile and also decrease gallbladder movement, resulting in gallstone formation.

No clear relationship has been proven between diet and gallstone formation. However, low-fiber, high-cholesterol diets, and diets high in starchy foods have been suggested as contributing to gallstone formation. Other nutritional factors that may increase risk of gallstones include rapid weight loss, constipation, eating fewer meals per day, eating less fish, and low intakes of the nutrients folate, magnesium, calcium, and vitamin C (Ortega et al. 1997). On the other hand, wine and whole grain bread may decrease the risk of gallstones (Misciagna et al. 1996). Studies also have found lower rates of gallstones in coffee drinkers (Leitzmann et al. 1999; Ortega et al. 1997).

A main symptom of gallstones is commonly referred to as a gallstone "attack," also known as biliary colic, in which a person will experience intense pain in the upper abdominal region that steadily increases for approximately thirty minutes to several hours. A victim may also encounter pain in the back, ordinarily between the shoulder blades, or pain under the right shoulder. In some cases, the pain develops in the lower region of the abdomen, nearer to the pelvis, but this is less common. Nausea and vomiting may occur. Symptoms include gastrointestinal distress and persistent pain in the upper right abdomen. Twenty percent of patients develop chronic diarrhea (Mayo 2007).

Often, these attacks occur after a particularly fatty meal and almost always happen at night (Haggerty 2004). Other symptoms include abdominal bloating, intolerance of fatty foods, belching, gas, and indigestion. If the above symptoms coincide with chills, lowgrade fever, yellowing of the skin or eyes, and/or clay-colored stool, a doctor should be consulted immediately (NDDIC 2007).

Gallstones that do not result in symptoms and do not cause pain or discomfort are called "silent stones" and do not affect the gallbladder or other internal organs. They do not need treatment (NDDIC 2007).

About one-third of those individuals experiencing an attack never experience a second attack, and thus non-invasive options may be prescribed, such as watchful waiting, reducing the amount of fat in the diet, and gradual weight loss (Haggerty 2002). Episodes may be managed by application of heat to the area affected, sips of water, and painkillers (Haggerty 2002).

Cholesterol gallstones can sometimes be dissolved by oral ursodeoxycholic acid. Gallstones may recur however, once the drug is stopped. Obstruction of the common bile duct with gallstones can sometimes be relieved by endoscopic retrograde sphincterotomy (ERS) following endoscopic retrograde cholangiopancretaography (ERCP). Gallstones may be destroyed in a number of hours by using a tube inserted into the abdomen to inject medication directly into the gallbladder (contact dissolution) (Haggerty 2002).

A common misconception is that the use of ultrasound (Extracorporeal Shock Wave Lithotripsy) is highly effective to break up gallstones. Although this treatment is highly effective against kidney stones, it can only rarely be used to break up the softer and less brittle gallstones. Lithotripsy is a long-term approach, since it may take months or years to dissolve a sizable stone (Haggerty 2002).

Cholecystectomy (gallbladder removal) has a 99 percent chance of eliminating the recurrence of cholelithiasis. Only symptomatic patients must be indicated to surgery. The lack of a gall bladder does not seem to have any negative consequences in many people. However, there is a significant proportion of the population, between 5 percent to 40 percent, who develop a condition called postcholecystectomy syndrome (Rhodes 2007).

There are two surgical options: Open procedure and laparoscopic:

A regimen called a "gallbladder flush" or "liver flush" is a popular remedy in alternative medicine. (Moritz 2005). In this treatment, often self-administered, the patient drinks four glasses of pure apple juice (not cider) and eats five apples (or applesauce) per day for five days, then fasts briefly, takes magnesium, and then drinks large quantities of lemon juice mixed with olive oil before bed. The next morning, they are said to painlessly pass a number of green and brown pebbles purported to be stones flushed from the biliary system. However, a New Zealand hospital analyzed stones from a typical gallbladder flush and found them to be composed of fatty acids similar to those in olive oil, with no detectable cholesterol or bile salts (Gaby 2005), suggesting that these "stones" are little more than hardened olive oil. Despite the gallbladder flush, the patient still required surgical removal of multiple true gallstones. The note concluded: "The gallbladder flush may not be entirely worthless, however; there is one case report in which treatment with olive oil and lemon juice resulted in the passage of numerous gallstones, as demonstrated by ultrasound examination." In the case mentioned (Savage et al. 1992), ultrasound confirmed multiple gallstones, but after waiting months for a surgical option, the patient underwent a treatment with olive oil and lemon juice, resulting in the passage of four 2.5 cm by 1.25 cm stones and twenty pea-sized stones. Two years later symptoms returned, and ultrasound showed a single large gallstone; the patient chose to have this removed surgically.

Gallstones are, oddly, a valuable by-product of meat processing, fetching up to US$32 per gram in their use as a purported antipyretic and antidote in the herbal medicine of some cultures, particularly in China. The finest gallstones tend to be sourced from old dairy cows, which are called Niu-Huang ("yellow thing of oxen") in Chinese. Those obtained from dogs, called Gou-Bao ("treasure of dogs") in Chinese, are also used today.

Retrieved from https://www.newworldencyclopedia.org/p/index.php?title=Gallstone&oldid=767676
Categories:
Hidden category:
This page was last edited on 22 July 2008, at 18:53.
Content is available under Creative Commons Attribution/Share-Alike License; additional terms may apply. See Terms of Use for details.