Schistosomiasis is the second most common human parasitic disease, after malaria, with an estimated 200 million people infected and, of these, 120 million displaying symptoms (Fulford and Keystone 2002). The disease is endemic in 75 countries (Fulford and Keystone 2002), primarily in Africa, Asia, and Latin America (Mawyer 2006). It is most commonly found in areas with water that is contaminated with fresh water snails, the intermediate host for the parasites.

As a parasitic disease, there are various preventive measures that can be undertaken, reflecting both social and personal responsibility. Social actions can include chemical and biological control of the species of snail acting as intermediate hosts and educating people about the ways that the disease can be transmitted. Personal responsibility includes avoiding waters known to have concentrations of the snails typically carrying the parasites and getting a checkup for the disease if one believes he or she may be infected. With proper precautions, the disease is a preventable one, and treatment is also available.

Schistosomiasis is caused by flukes of the genus Schistosoma. Fluke is the common name for any member of the class Trematoda, a group of flat, leaf-like endoparasites within the phylum Platyhelminthes ("flatworms").

Members of Schistosoma (schistosomes) belong to a category of flatworms known as "blood flukes," a type that inhabits the blood in some stages of their life cycle. There are many species of animal schistosomes, but five species primarily infect humans and cause schistosomiasis: Schistosoma mansoni, S. intercalatus, S. haematobium, s. japonicum, and S. mekongi. Each causes a different clinical presentation of the disease. Schistosomiasis may localize in different parts of the body, and its localization determines its particular clinical profile. 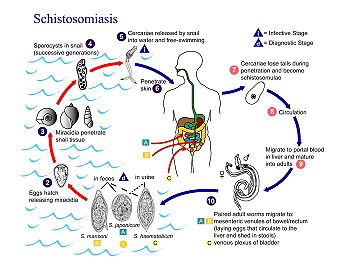 Schistosomes have a typical trematode vertebrate-invertebrate life cycle, with humans being the definitive host. The life cycles of all five human schistosomes are broadly similar. Parasite eggs are released into the environment from infected individuals, hatching on contact with fresh water to release the free-swimming larvae called miracidia. Miracidia infect fresh-water snails by penetrating the snail's foot. After infection, close to the site of penetration, the miracidium transforms into a primary (mother) sporocyst. Germ cells within the primary sporocyst will then begin dividing by mitosis to produce secondary (daughter) sporocysts, which migrate to the snail's hepatopancreas. Once at the hepatopancreas, germ cells within the secondary sporocyst begin to divide again, this time producing thousands of new parasites, free-swimming larvae known as cercariae, which are the larvae capable of infecting mammals.

Cercariae emerge daily from the snail host in a circadian rhythm, dependent on ambient temperature and light. Young cercariae are highly motile, alternating between vigorous upward movement and sinking to maintain their position in the water. Cercarial activity is particularly stimulated by water turbulence, by shadows, and by chemicals found on human skin. Penetration of the human skin occurs after the cercaria have attached to and explored the skin. The parasite secretes enzymes that break down the skin's protein to enable penetration of the cercarial head through the skin. As the cercaria penetrates the skin it transforms into a migrating schistosomulum stage.

The newly transformed schistosomulum may remain in the skin for two days before locating a post-capillary venule; from here the schistosomulum travels to the lungs where it undergoes further developmental changes necessary for subsequent migration to the liver. Eight to ten days after penetration of the skin, the parasite migrates to the liver sinusoids. S. japonicum migrates more quickly than S. mansoni, and usually reaches the liver within eight days of penetration. Juvenile S. mansoni and S. japonicum worms develop an oral sucker after arriving at the liver, and it is during this period that the parasite begins to feed on red blood cells.

The nearly-mature male and female worms form a permanent mating pair, with the longer female worm residing in the gynaecophoric channel of the shorter male. Adult worms are about 10 millimeters long. Worm pairs of S. mansoni and S. japonicum relocate to the mesenteric or rectal veins. S. haematobium schistosomula ultimately migrate from the liver to the perivesical venous plexus of the bladder, ureters, and kidneys through the hemorrhoidal plexus.

Parasites reach maturity in six to eight weeks, at which time they begin to produce eggs. Adult S. mansoni pairs residing in the mesenteric vessels may produce up to 300 eggs per day during their reproductive lives. S. japonicum may produce up to 3000 eggs per day. Many of the eggs pass through the walls of the blood vessels, and through the intestinal wall, to be passed out of the body in feces. S. haematobium eggs pass through the ureteral or bladder wall and into the urine. Only mature eggs are capable of crossing into the digestive tract, possibly through the release of proteolytic enzymes, but also as a function of host immune response, which fosters local tissue ulceration. Up to half the eggs released by the worm pairs become trapped in the mesenteric veins, or will be washed back into the liver, where they will become lodged. Worm pairs can live in the body for an average of four and a half years, but may persist up to twenty years.

Eggs that pass out of the human body into freshwater will continue the cycle of becoming free-swimming larvae (miracidia) that will infect the snail intermediate host. But those that do not end up in human tissues.

Trapped eggs mature normally, secreting antigens that elicit a vigorous immune response. The eggs themselves do not damage the body. Rather it is the cellular infiltration resultant from the immune response that causes the pathology classically associated with schistosomiasis.

Most infections are asymptomatic or subclinically symptomatic, with mild anemia and malnutrition being common in endemic areas.

Acute schistosomiasis (Katayama's fever) may occur weeks after the initial infection, especially by S. mansoni and S. japonicum. Manifestations include:

Occasionally central nervous system lesions occur: Cerebral granulomatous disease may be caused by ectopic S. japonicum eggs in the brain, and granulomatous lesions around ectopic eggs in the spinal cord from S. mansoni and S. haematobium infections may result in a transverse myelitis with flaccid paraplegia. Continuing infection may cause granulomatous reactions and fibrosis in the affected organs, which may result in manifestations that include:

Microscopic identification of eggs in stool or urine is the most practical method for diagnosis. The stool exam is the more common of the two. For the measurement of eggs in the feces of presenting patients, the scientific unit used is epg or eggs per gram. Stool examination should be performed when infection with S. mansoni or S. japonicum is suspected, and urine examination should be performed if S. haematobium is suspected.

Eggs can be present in the stool in infections with all Schistosoma species. The examination can be performed on a simple smear (1 to 2 mg of fecal material). Since eggs may be passed intermittently or in small amounts, their detection will be enhanced by repeated examinations and/or concentration procedures (such as the formalin-ethyl acetate technique). In addition, for field surveys and investigational purposes, the egg output can be quantified by using the Kato-Katz technique (20 to 50 mg of fecal material) or the Ritchie technique.

Eggs can be found in the urine in infections with S. japonicum and with S. intercalatum. Detection will be enhanced by centrifugation and examination of the sediment. Quantification is possible by using filtration through a nucleopore membrane of a standard volume of urine followed by egg counts on the membrane. Investigation of S. haematobium should also include a pelvic x-ray as bladder wall calcification is highly characteristic of chronic infection. 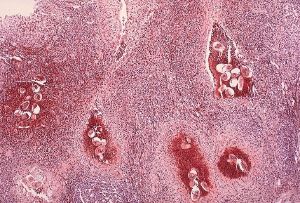 Tissue biopsy (rectal biopsy for all species and biopsy of the bladder for S. haematobium) may demonstrate eggs when stool or urine examinations are negative.

Antibody detection can be useful in both clinical management and for epidemiologic surveys.

Schistosomiasis is readily treated using a single oral dose of the drug Praziquantel. While Praziquantel is safe and highly effective in curing an infected patient, it does not prevent re-infection by cercariae and is thus not an optimum treatment for people living in endemic areas. As with other major parasitic diseases, there is ongoing and extensive research into developing a vaccine that will prevent the parasite from completing its life cycle in humans.

Antimony has been used in the past to treat the disease. In low doses, this toxic metalloid bonds to sulfur atoms in [[enzymes]s used by the parasite and kills it without harming the host. This treatment is not referred to in present-day peer-review scholarship; Praziquantel is universally used. Outside of the United States, there is a second drug available for treating Schistosoma mansoni (exclusively) called Oxamniquine.

Mirazid, a new Egyptian drug, is under investigation for oral treatment of the disease.

Experiments have shown medicinal Castor oil as an oral anti-penetration agent to prevent Schistosomiasis and that praziquantel's effectiveness depended upon the vehicle used to administer the drug (e.g. Cremophor/Castor oil) (Salafsky et al. 1989).

A few countries have eradicated the disease, and many more are working towards it. The World Health Organization is promoting efforts working towards this goal. In some cases, urbanization, pollution, and/or consequent destruction of snail habitat has reduced exposure, with a subsequent decrease in new infections.

The most common way of getting schistosomiasis in developing countries is by wading or swimming in lakes, ponds, and other bodies of water that are infested with the snails (usually of the Biomphalaria, Bulinus, or Oncomelania genus) that are the intermediate hosts of the Schistosoma pathogen.

The main focus of prevention is, thus, eliminating the water-borne snails that are natural reservoirs for the disease. This is usually done by identifying bodies of water, such as lakes and ponds that are infested, forbidding or warning against swimming, and adding niclosamide, acrolein, copper sulfate, and other chemicals to the water in order to kill the snails. Recent studies have suggested that snail populations can be controlled by the introduction or augmentation of existing crayfish populations; as with all ecological interventions, however, this technique must be approached with caution.

Unfortunately, for many years from the 1950s onwards, despite the efforts of some clinicians to get civil engineers to take schistosomiasis into account in their designs, civil engineers built vast dam and irrigation schemes, oblivious of the fact that they would cause a massive rise in water-borne infections from schistosomiasis. This occurred despite the fact that with a little care, the schemes could have been designed to minimize such effects, the detailed specifications having been laid out in various UN documents since the 1950s. Irrigation schemes can be designed to make it hard for the snails to colonize the water, and to reduce the contact with the local population (Charnock 1980).

Research has suggested that gopo berry (Phytolacca dodecandra) can be an effective plant molluscicide in the control of the freshwater snails that carry the bilharzia disease (DRNIH 1998).

On an individual level, people can guard against schistosomiasis infection by avoiding bodies of water known to or likely to harbor the carrier snails.