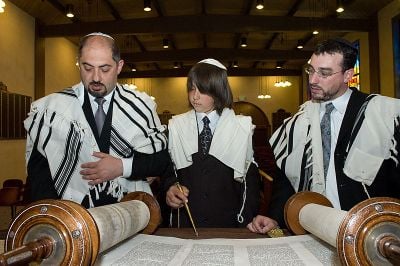 Jewish boy reading a Torah scroll at his Bar Mitzvah

A rite of passage is a ritual that marks a change in a person's social or sexual status. Rites of passage are often ceremonies surrounding events such as childbirth, puberty, coming of age, marriages, or death. The term was popularized by German ethnographer Arnold van Gennep (1873-1957) in the early part of the twentieth century. Rites of passage are diverse, celebrated in a wide variety of ways throughout the world. There continue to be many diverse examples of rites of passages in contemporary society.

Despite their diversity, rites of passage all serve the same purpose: To separate the individual from their former group, prepare them for their new phase of life, and their re-entry into society at this new level or position. The process not only prepares the individual for a new role or phase in their life, but also may serve to bind them with others who are going through the same process. Researchers noted that this "liminal" phase, in which individuals are neither in their former group or position nor yet re-introduced into society, is very significant. During this time, each individual prepares him or herself for the future, and the responsibilities that will come, yet during that time they are not constrained. Thus, barriers that might normally exist between people of different social status, for example, dissolve and each person is regarded as simply another person in the same liminal state. Such an experience can have a powerful impact, laying the foundation for deep relationships in the future. In order to establish a world of peace and harmony, all people may need to go through a "rite of passage" and experience this liminal state wherein all are equal in value.

According to Arnold van Gennep, rites of passage have three phases: Separation, liminality, and incorporation. In the first phase, people withdraw from the group and begin moving from one place or status to another. In the third phase, they reenter society, having completed the rite. The liminal phase is the period between states, during which people have left one place or state but have not yet entered or joined the next. During the liminal state one's sense of identity dissolves to some extent, as it is a period of transition.

Victor Turner and Mary Douglas developed further theories on rites of passage in the 1960s. Turner coined the term liminoid to refer to experiences that have characteristics of liminal experiences but are individualized and do not involve a resolution of a personal crisis. A graduation ceremony might be regarded as liminal while a rock concert might be understood to be liminoid. The liminal is part of society, a social or religious ritual, while the liminoid is a break from society. Turner stated that liminal experiences are rare and diminished in industrial societies, and are replaced by liminoid experiences.

There are many situations in which rites of passage are observed. Following are some of the most universally recognized.

The events in an individual's life cycle, particularly those surrounding birth, marriage, and death are acknowledged in almost all cultures to be important rites of passage. However, the way in which these events are celebrated varies considerably across countries and regions and within different religious and ethnic groups. The customs and traditions surrounding these events can be elaborate and complex. For example, traditional Hindu funeral ceremonies usually last thirteen days, while Indonesian weddings are often attended by more than a thousand guests.

In Western cultures pregnancy is often celebrated with a baby shower. In the Jewish tradition a baby boy undergoes brit milah, a religious circumcision, while Muslims and Hindus shave the baby's head on the seventh day.

Brides to be in Western countries often receive engagement rings and hold bachelor and bachelorette parties. Traditional American and European brides wear white on their wedding days, a custom which has been adopted by cultures throughout the world, while red is worn by Muslim, Chinese, Indian, Pakistani, and Armenian brides.

Sikh women generally wear white clothes for mourning, although sometimes they wear black. Though there are variations within the Hindu traditions, women generally wear white or black. For example, Jewish mourners returning home from a funeral are normally given a hard boiled egg as a symbol of life. The process of mourning is also conducted according to different traditions, sometimes taking a considerable time period. 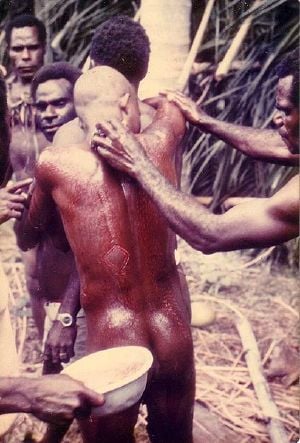 Coming of age rituals, which occur in different forms in most cultures, are some of the most recognized rites of passage. For example, debutante balls, which are traditionally held in upper class Western society, and quinceañeras, which take place in Hispanic communities, mark a girl's introduction into womanhood. Birthday celebrations often serve as rites of passage, such as "sweet sixteen" parties in the United States. The Poy Sang Long is a ceremony undergone by boys in Burma and Thailand where they become novice monks and temporarily live the monastic lifestyle. In some cultures, coming of age rituals can involve scarification and various other physical endurances.

In 1928, the American cultural anthropologist Margaret Mead published her controversial findings in Coming of Age in Samoa. Her study was conducted in a village of six hundred people on the island of Tau, Samoa. Mead lived with, observed, and interviewed young women, concluding that adolescence in Samoa was a not marked by the emotional or psychological distress, anxiety, or confusion often seen in the United States.

Despite its prevalence in the media, not all cultures undergo adolescence as experienced in America and other Western cultures. The rites of passage which people in the United States typically experience follow a chronological, youth-oriented line. It begins with birth and a child's first steps and first words spoken, and includes childhood events such as learning to ride a bike. Adolescent coming of age would not be complete without the first kiss and first relationship, first car, and first job.

Marriage and children are important rites of passage in the United States, as well as in most other cultures. There are few important recognized rituals in later adulthood in the United States except retirement. While many people around the world and in the U.S. will experience them, the construction of the idea of these events as particularly transformative is deeply rooted in the specific national identity in the United States. These are often mistakenly presented as universal across culture, class, and context, and are mythologized in various national and international media.

Many rites of passage center around a child's education. The first day of school is an especially important rite of passage in Western culture. In various tribal societies, entry into an age grade—generally gender-separated—is marked by an initiation rite, which may be the crowning of a long and complex preparation. Graduation is acknowledged in most cultures as a rite of passage. It is celebrated differently in different areas of the world. For example, in Scandinavia students celebrate russ festivities throughout the month when they graduate high school. In the U.S., Britain, and Canada, the prom is another important rite of passage associated with high school graduation. In Spanish universities, a student who has completed his studies is sometimes submitted to a public questioning by the faculty. If the student passes he invites professors and mates to a party. If not, he is publicly processioned with donkey ears. 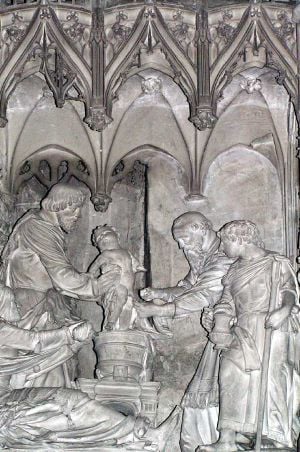 Christ underwent the Jewish circumcision, here depicted on a Catholic cathedral; a liturgical feast commemorates this on New Year's Day

Many rites of passage around the world center on religion. There are the processes of baptism and confirmation in Christian cultures, and the first confession in the Catholic tradition.

Jewish teenagers celebrate their bar mitzvah or bat mitzvah, while younger children in certain Hindu castes celebrate the sacred thread ceremony to mark the beginning of their education. In Amish communities, adolescents will sometimes spend an experimental period living outside the community before deciding whether to return to the church and be baptized as an adult. This rite of passage is known as Rumspringa. The ritual of Vision quest is undergone in some Native American cultures by shaman apprentices. These youths are often required to undergo sensory deprivation in order to help them make contact with the spirits.

Other initiation rites include the Walkabout, a process that is believed to be practiced by the Australian Aborigines in which youths spend a period of time alone in the wilderness. Another ceremony of initiation is the Batizados celebration, in which new members are baptized into Capoeira groups, a Brazilian form of martial arts. There are specific rites of passage for the various branches of the Armed forces. For example, in the U.S. Navy, wetting-down is a ceremony in which a Naval officer is ceremonially thrown into the ocean upon receiving a promotion. In many military organizations, as in academic groups such as dorms, fraternities, teams, and other clubs, new recruits are sometimes subjected to hazing.

The example of a college graduation ceremony demonstrates the three stages of a rite of passage.

This change is accomplished by separating the participants from their usual social setting. The students are first separated from the rest of their community, both by gathering together and by wearing distinctive clothing.

A period during which one is "neither here nor there." When the ceremony is in progress, the participants are no longer students but neither are they yet graduates. This is the distinctive character of liminality.

A period during which one's new social status is confirmed and reincorporated. Upon receiving his or her diploma, the student officially becomes a college graduate. The dean and professors shake the student's hand in congratulation, giving public recognition to the student's new status as a person with a college degree.

During the liminal stage, normally accepted differences between the participants, such as social class, are often de-emphasized or ignored. A social structure of communitas forms: One based on common humanity and equality rather than recognized hierarchy. For example, during a pilgrimage, members of an upper class and members of a lower class might mix and talk as equals, when in normal life they would likely never talk at all or their conversation might be limited to giving orders.

In the example of a college graduation ceremony, the liminal phase can actually be extended to include the period of time between when the last assignment was finished all the way through reception of the diploma. The individual has not transitioned to a new stage in life psychologically or physically, and the result is a unique perspective on what has come before, and what may come next.

The time between when a couple become engaged and their marriage, between conception and birth or between death and burial are liminal periods. When Western cultures use mistletoe, the plant is placed in a threshold at the time of the winter solstice. The kiss that occurs under the mistletoe breaks the boundaries between two people. Because what happens under the mistletoe is occurring in ritual time/space, the people kissing are not breaking taboos imposed under normal circumstances by their marriages to (or relationships with) other people.