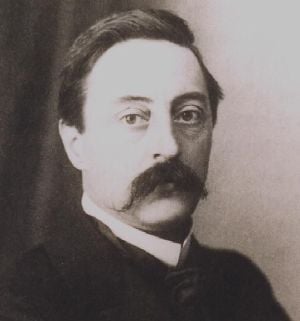 Charles-Arnold Kurr van Gennep (April 23, 1873 – 1957) was a German-born, French ethnographer and folklorist, recognized as the founder of the field of folklore in France. He remains famous for his study of the rite of passage rituals marking significant transitions in human lives, such as birth, puberty, marriage, and death. He introduced the concept of "liminality" to describe the time in which people are on the threshold of entering a new phase in their life, having left the previous one behind. Ceremonies marking this transition enable people to experience this liminal phase, losing and then recreating their identity.

Van Gennep's work showed that the formation of social groups is natural, and that the value of the individual need not be lost in such groups. However, others such as Emile Durkheim regarded social groups as exerting excessive force, dominating individuals and taking away their freedom. Van Gennep believed that since social groups are composed of individuals, it is not inevitable that individual freedom be taken away by the group. His explanation of the liminal phase in which human beings pass through transitions in life, where their identity is relaxed and reformed, is a valuable contribution to ensuring that human society functions with the needs of the group and the individuals who make up that social group in balance.

Charles-Arnold Kurr van Gennep was born in Ludwigsburg, Germany, into a family of mixed Dutch-French immigrants. When he was six his parents separated, and van Gennep moved with his mother to live in Lyons, France. He initially enrolled in a school in Lyons, but, due to numerous behavioral problems, in 1884 he was transferred to Sainte-Barbe-des Champs in Paris. He completed high school in Nice, receiving prizes for his grades, but penalties for frequent misconduct.

In 1892, van Gennep received the philo aux sciences restreintes degree from a lycée in Grenoble. After a dispute with his stepfather over whether to continue to study surgery in Lyons or Paris, van Gennep chose neither, and started his career as a diplomat. He possessed incredible language skills (by the end of his career he could speak 18 different languages), and this career choice was a logical decision.

He moved to Paris and enrolled in the École des Hautes Études. There he fell in love with a beautiful, young, but poor girl, whom he eventually married in 1897, despite his parents' disapproval. The couple moved to Czentochowa, Poland, where van Gennep worked as a school teacher. They lived there from 1897 to 1901.

After returning to France, van Gennep decided to complete his education in the École Pratique des Hautes Études and the École des Langues Orientales in Paris. His studies included general linguistics, ancient and modern Arabic language, Egyptology, Islamic studies, and studies of the religions of primitive peoples. His dissertation was published in two parts: the first part in 1904, under the title Tabou et totémisme à Madagascar, and the second in 1906, under the name Mythes et légendes d’Australie. In 1909, he published his most important work, Les Rites de Passage (The Rites of Passage), which introduced him to the academic world.

Van Gennep worked as a translator in the Ministry of Agriculture for several years. He worked several jobs at the same time, which ensured sufficient income for his family of four. At the same time he was able to do academic work. In 1912 and 1914 he conducted fieldwork in Algeria, writing on the role of women in Islamic society. From 1912 to 1915 he worked for the University of Neuchâtel in Switzerland, where he taught ethnology. In 1915, though, he was expelled from the university, as a result of his criticism of the Swiss pro-German politics. That was the only academic position he ever had. He tried several times after that to obtain an academic post, especially in France, but the door for him seemed to be closed. He lectured in many universities, but never in a French one. Perhaps one of the reasons for such rejection from French universities was his fierce criticism of Emile Durkheim’s work, which was so deeply rooted in French academia.

In 1920, van Gennep started his intensive study of French folklore. His seven-volume Manuel de folklore français contemporain and four-volume Le folklore François are from this period. He worked as a writer for the l’Institut Pelman (1927–1933), and Mercure de France (1906–1939), writing on the topics of ethnography, folklore, and religion. Throughout the 1940s and 1950s he published numerous books and articles on different topics in the area of ethnography, and lectured in different universities around the world.

Did you know?
Arnold van Gennep introduced the concept of rites of passage to describe the rituals that accompany passing from one stage of life to another

Van Gennep is best known for his work on rites of passage ceremonies and his study of totemism in early societies, which brought him into conflict with the views of Emile Durkheim.

His most famous publication is Les rites de passage (The Rites of Passage) (1909), which describes rituals that accompany passing from one stage of life to another, which he called rites of passage. Van Gennep noticed, as he worked among different peoples of Africa and Oceania, that birth, puberty, marriage, and death, are specially commemorated in every culture. The actual ceremonies may differ, but their meaning is universal—celebration of the transition from one phase of life to another:

I demonstrated ... that all over the world and in all civilizations, from the most primitive to the most evolved, every change of place, of social situation ... all innovation and very often even all modification is accompanied ... by rites ... which always follow the same order and constitute the schema-type of the rites of passage (Le folklore du Dauphine 1932).

He argued that all rites of passage share similar features, including:

The concept of "liminality" (from the Latin word līmen, meaning "a threshold") was introduced by van Gennep to describe the quality of the second stage of a ritual, especially a rite of passage, that involves some change to the participants, especially their social status. The liminal state is characterized by ambiguity, openness, and indeterminacy. One's sense of identity dissolves to some extent, bringing about disorientation. Liminality is a period of transition, during which the normal limits to thought, self-understanding, and behavior are relaxed, opening the way to something new.

Van Gennep regarded rites of passage as essentially necessary for the normal and healthy life of society. He believed that they preserve social stability by releasing the pressure built up in individuals through giving them new social status and new roles.

Totemism and conflict with Durkheim

Van Gennep was a fierce critic of Emile Durkheim and L’Année Sociologique and their approach to society. In a series of articles in the mid-1900s, van Gennep and Marcel Mauss, one of the main propagators of Durkheim’s ideas, publicly corresponded on the topic of totemism. Van Gennep saw human social institutions as necessary for human survival. He argued that humans form groups in order to survive, and thus that groups have a special place in human evolution. Moreover, van Gennep saw the very process of forming groups as the natural tendency of matter, visible in nature:

Indeed, one can very well admit in chemistry and in crystallography inherent tendencies of the bodies, tendencies of movement and tendencies of grouping (L’état actuel du problème totémique 1920).

In order for a group to survive, however, internal cohesion, as well as the continuity of the group through generations had to be achieved. In the earliest societies, totemism, argued van Gennep, provided both continuity and cohesion. Moreover, it proliferated itself independently from secondary groups in the society—family, clan, or caste—and provided the means for establishing the relationship between groups. Van Gennep objected to Durkheim’s view that social institutions evolve because of the evolution of human intellect and culture. Rather, he claimed, social institutions evolve due to the growth of complexity of social relationships.

Another point of dispute between van Gennep and Durkheim was on the role of an individual in the society. Van Gennep opposed Durkheim’s claim that individuals are subordinated to the will of the society, and can do little against the collective. Van Gennep claimed that society is composed of individuals, and thus individuals have power to change the whole:

But a human society has for primordial components individual forces each of which can at any moment react ... I have too often insisted on this power of the individual, even in primitive societies, to modify the collective situation to need to return to it here (L’état actuel du problème totémique 1920).

He believed that although folklore is a collective and anonymous creation of the people, the creative force of the individual can still change the collective. Thus, he viewed the object of the study of folklore to be the individual within the group, and not the group itself.

Arnold van Gennep was the first anthropologist to study the significance of the ceremonies linked to the transitional stages of human life. He coined the term "rites of passage," which is still in usage in modern anthropology and sociology. He introduced the concept of "liminality" to describe the transitional phase in these ceremonies.

Van Gennep’s work The Rites of Passage was highly influential in the structuring of Joseph Campbell's book, The Hero with a Thousand Faces. Campbell divided the journey of the hero into three parts: "Departure," "Initiation," and "Return." Van Gennep’s concept of liminality, the transition or initiation phase of these rites of passage, was further developed in the work of anthropologist Victor Turner, particularly in Turner’s 1969 text, The Ritual Process: Structure and Anti-Structure.

Retrieved from https://www.newworldencyclopedia.org/p/index.php?title=Arnold_van_Gennep&oldid=1093223
Categories:
Hidden category:
This page was last edited on 27 December 2022, at 16:52.
Content is available under Creative Commons Attribution/Share-Alike License; additional terms may apply. See Terms of Use for details.