Rumspringa also spelled Rumschpringe or Rumshpringa, translated from originally Palatine German and other Southwest German dialects to English as "jumping or running around," is a rite of passage during adolescence, used in some Amish communities. For Amish youth, the Rumspringa normally begins at age 16 and ends when a youth chooses either to be baptized in the Amish church or to leave the community.

The Amish, a sub-sect of the Anabaptist Christian movement, intentionally segregate themselves from other communities as a part of their faith. The rumspringa experience allows teenagers to spend some time, with various amounts of freedom, to experience life outside their community. It is also a time during which courtship occurs, often leading to the decision to marry. Since Amish youth are given this time to choose their faith and lifestyle, their decisions are made in a mature fashion with serious commitment to their chosen path. It is notable that the large majority of Amish youth choose baptism and remain within their church community.

Rumspringa is the period when the young Amish person, having reached the age of 16, is regarded as having reached maturity. They are then permitted to attend the Sunday night "singings" that are the focus of courtship among the Amish. According to Amish sources, a youth who dares to attend one of these events before the age of 16 might be force-fed warm milk from a spoon, as a good-natured reminder to observe the lines of status.[1]

At this time Amish youth join "gangs," which function as youth groups. The nature of the gang has great impact on their rumspringa experience. "Plain gangs" are conservative, staying close to the standards of behavior of the community, while "Fancy gangs" provide more of an "English" (non-Amish) experience.[3]

Amish elders generally view rumspringa as a time for courtship and finding a spouse.[4] The decision to marry in the Amish community requires that both members of the couple are first baptized, making the commitment to follow the Amish customs, bound by the Ordnung as adult members in the church. 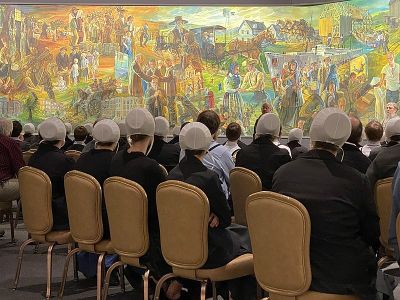 Amish youth groups may visit Behalt as part of their preparation to make the decision of whether or not to join the church. Behalt, displayed in the Amish and Mennonite Heritage Center in Berlin, Holmes County, Ohio,[5] is a 10-by-265-foot (3.0 by 80.8 m) cyclorama painted by Heinz Gaugel in the late twentieth century.[6] The name comes from the German word behalten: to hold onto or to remember.[7] The work illustrates the heritage of the Amish and Mennonite people from the beginnings of Christianity.

A popular view exists by which the period is institutionalized as a rite of passage, and the usual behavioral restrictions are relaxed, so that Amish youth can acquire some experience and knowledge of the non-Amish world. Among the Amish, however, rumspringa simply refers to adolescence. During that time a certain amount of misbehavior is unsurprising and is not severely condemned (for instance, by Meidung or shunning). Adults who have made a permanent and public commitment to the faith are held to the higher standards of behavior defined in part by the Schleitheim and Dordrecht confessions.[8] In a narrow sense the young are not bound by the Ordnung because they have not taken adult membership in the church. Amish adolescents do remain, however, under the strict authority of parents who are bound to Ordnung, and there is no period when adolescents are formally released from these rules.[9][10][11]

Not all youth diverge from custom during this period; approximately half in the larger communities and the majority in smaller Amish communities remain within the norms of Amish dress and behavior during adolescence.[4]

However, during rumspringa only a minority of Amish youth diverge from established customs.[4] Some may be found:

Some Amish youth separate themselves from the community, even going to live among the "English," or non-Amish Americans, experiencing modern technology. Their behavior during this time does not necessarily prevent them from returning for adult baptism into the Amish church.

Most of them do not wander far from their family's homes during this time, and large numbers (85%–90%) ultimately choose to join the church.[12] However this proportion varies from community to community, and within a community between more and less acculturated Amish.[13]

Not all Amish use this term; for example, it does not occur in John A. Hostetler's extended discussion of adolescence among the Amish.[9] However, for all communities adolescence is a time for young Amish to have the freedom to make their choice as to whether to be baptized and fully commit themselves to their faith and lifestyle, or whether to leave their community.

For Wenger Mennonites, rumspringa occurs mostly between ages of 17 and 21. These youth go through a period of rumspringa starting at age 17 and typically ending at marriage, a few years older than the Amish do. Since most of the youth get baptized when they are ages 16 to 19, they typically do not get into the type of serious offenses of the most "disorderly" of the Amish youth.[14]

As among the non-Amish, there is variation among communities and individual families as to the best response to adolescent misbehavior. Some Amish communities hold views similar to Old Order Mennonite, and Conservative Mennonites in seeking more productive, spiritual activities for their youth.

In some cases, patience and forbearance prevail, and in others, vigorous discipline. Far from an open separation from parental ways, the misbehavior of young people during the rumspringa is usually furtive, though often collective (this is especially true in smaller and more isolated populations). They may or may not mingle with non-Amish in these excursions. The age is marked normatively in some Amish communities by allowing the young man to purchase a small "courting buggy," or – in some communities – by painting the yard-gate blue (traditionally meaning "daughter of marriageable age living here"; this custom is noted by Aurand, along with the reasonable caution that sometimes a blue gate is just a blue gate).[15]

The nature of the rumspringa period differs from individual to individual and from community to community. In large Amish communities like those of Lancaster County, Pennsylvania, Holmes, and Wayne Counties, Ohio, and Elkhart and LaGrange Counties, Indiana, the Amish are numerous enough that an Amish youth subculture exists.[4] During rumspringa, the Amish youth in these large communities will join one of various groups, or "gangs," ranging from the most rebellious to the least. These groups are not necessarily divided across traditional Amish church district boundaries, although they often are.

In many smaller communities, Amish youth may have a much more restricted rumspringa, and likewise may be less likely to partake in strong rebellious behavior, as they lack the anonymity of larger communities. Similarly, in the most conservative communities, venturing outside of the community during rumspringa is frowned upon. For example, most of Swartzentruber Amish, one of the largest and most conservative sub-groups of the Old Order Amish, do not allow teenagers to leave the community during rumspringa at will.[16][17]

Levi Miller's 1989 novel Ben's Wayne describes the rumspringa of an 18-year-old Amish youth in Holmes County, Ohio, during the fall of 1960. According to Richard A. Stevick, the novel is a realistic portrayal of the rumspringa of that time.[18]

Retrieved from https://www.newworldencyclopedia.org/p/index.php?title=Rumspringa&oldid=1092423
Categories:
Hidden category:
This page was last edited on 22 December 2022, at 18:14.
Content is available under Creative Commons Attribution/Share-Alike License; additional terms may apply. See Terms of Use for details.